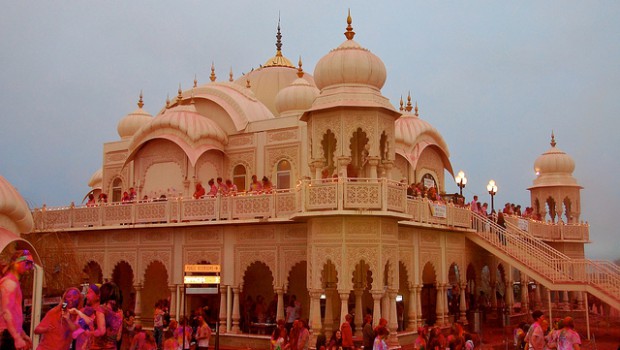 June 23: The opening of the new Radha Krishna temple in Utah was covered by all five Salt Lake City television stations and the three major newspapers. On two TV stations it was the lead story, and in one nerwspaper threre was a color picture on the front page. The local paper ran this article.

The tiny community of Salem attracted national attention Saturday as 4000 visitors flocked from Montana, Idaho, and even California and New Jersey, to witness dedication ceremonies for a one-of-a-kind Krishna temple.

The building is the only Indian-style temple Krishna in America built from the ground up and is modeled after a famous temple in India called the “Temple on the Lake of Flowers.”

Salem is just the place to have such a temple, said Mark Zaritsky, a member of the Salem West Stake of the Church of Jesus Christ of Latter Day Saints.

“Salem is the city of peace. It truly is. And it’s brought people together who can truly live in peace no matter what their beliefs are. . . It’s the commonality of wanting peace, of wanting our children to grow up in a safe and loving environment°Vit’s those things that bring all of us together,” he said.

Under the direction of Stake President Stan Green, members of the West Stake came out one evening to help excavate for a pond on the site, clean up, and place decorative panels around the temple’s balcony. “It was a very warm, sharing, helping atmosphere,” said Zaritsky.

“I helped put those (panels) up there on the second floor, which actually gives me a sense of pride in this temple,” he said.

Zaritsky said that many of the comments made at the dedication emphasized a spirit of acceptance and help and love between the Krishnas and the Mormon community in Salem.

The temple is and only minutes from several LDS chapels and just across the street from a Jehovah’s Witness Kingdom Hall. “I’m glad to see that we have a little diversity around here. It’s a good thing. We’re all God’s children” said Mark’s wife, Lynn.

During Saturday’s dedication ceremonies, seven deities were installed, each of which may accept offerings for God during prayers, Jai Gopal Das.

Deities are made in the form or God, and therefore, are the same as God, he said. “God is no different than his form, so we are worshiping his form.” There is only one God, but he can manifest himself in what appears to be a physical body, said Jai.

During dedication ceremonies, those who contributed most to the temple, and are considered pillars of the Krishna community were invited to sit closest to a sacrificial fire. They helped feed the fire and were led in mantras to God, demi-gods and servants of God. The fire represented removing auspiciousness from the temple, Jai explained.

“Ghee,” or clarified butter, along with water and “samagri” or mixed grains, were offered to the deities in the fire sacrifice. Krishnas believe that, as mantras are chanted to each deity in turn, the deity being addressed becomes present in the fire, Jai said.

After the sacrificial fire, kalashes or pots with either herbal water, yogurt, flowers, or milk to pour on the deities were carried around the temple by believers as they chanted Sanskit mantras. “We are preparing our minds to bathe the deities of the Lord, ” said Jai

After the offerings were poured on the deities, the deities were cleaned off and carefully dressed. Krishnas believe God becomes fully manifest in the deities once they are installed. “The deities now are alive. Now they have souls,” said temple trustee Dinesh Patel.

His wife, Kalpana, said that the temple gives Krishna devotees a place to worship and to celebrate together. While she always worships in her home, “Some celebrations cannot be done at home,” she said.

“(The temple) means a lot to me. It’s beautiful to have this temple just a few miles from my home in Salt Lake City. It is always nice to come to the temple. You go and chant and pray.”

The temple opening drew hundreds of local residents, many just curious to see the imposing structure. But some, like Lalita Nandini, came many miles to participate in the ceremonies and to increase their spiritual consciousness.

Lalita, originally from Slovenia, traveled from Boise for the opening. She and her husband, one of the Brahmin priests qualified to officiate in the ceremonies, came to help out as well as to see the new temple.

Lalita, who was raised a Catholic, joined the Krishna movement after personal problems prompted her to seek for deeper answers to many of life’s questions. She wanted to know her mission and purpose in life.

Caru Das, who with his wife Vaibhasi Dasi, spearheaded the building of the temple, said that there are some 500-600 Krishna devotees in Utah Valley. In Salt Lake, there are some 1200 families with about 5000 members, he said.