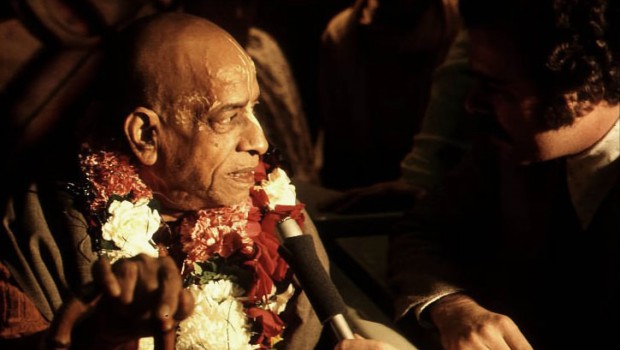 Please accept my blessings. I beg to acknowledge receipt of your letter dated November 29, 1975. I have noted the contents carefully. Your book is selling very nicely in south India, people are appreciating it very much. This scientific book should be done very carefully, so that people in general may not be mislead by the over intelligent scientists. There are so many contradictory things, but we have our authority and they have their authority. Our knowledge is from vedic scriptures which we accept as definite and without any mistake. A modern scientist believes that there was no civilization before 3,000 years, our Bhagavatam was spoken by Sukadeva Goswami 5,000 years ago and he is explaining “as I have heard it from authority”, so we have got parampara system for millions of years. If there was no civilization before 3,000 years, then how this subject matter of knowledge could be discussed? How could it be received through the param-para system? So there is contradiction certainly. But the statement that there was no civilization 3,000 years ago can be adjusted by the conviction that there was civilization, millions and millions of years ago.

For more information regarding vedic astronomy you can consult any learned astronomer, there are many in Calcutta, my Guru Maharaja was also very learned in this field.

My point is life comes from life. They say life has come from chemicals, so how these things can be adjusted? Besides that the scientists change their theories after some years, this proves that they have no perfect knowledge, otherwise where is the necessity of changing? That is the basic point of our argument. Perfect knowledge is never changeable. If we can prove that life comes from life, or the soul is from the supper soul, then all other things can be brought into serious consideration. So you try to prove that chemical combination can never bring about life, this is our main argument. If we can prove this particular subject matter, that the soul cannot be manufactured by combination of chemicals, then gradually we can prove that vedic knowledge is perfect, while other sources of knowledge by speculation and imagination are all wrong.

The other day I was talking on the morning walk about the sun globe. They say because it is fiery there cannot be any life there, but sometimes we see a big iron factory is full of flames from the chimney at a long distance, but does it mean there is no life in the factory? Fire is one of the five material elements, and Bhagavad-gita says that the soul is never burnt by fire. So in the sunglobe globe if the living entities have a fiery body, just as fish have body suitable for living in the water, so how is it that there is no living entity in the sun globe if they have a body suitable to live in the sun globe? In the vedic literatures it is said that there are germs (agni pok) within the fire. There are so many contradictions, but we have our own defence. Why should we blindly accept imperfect scientists, they are imperfect because they are changing their position in the name of progress. The word progress is used when there is imperfection at the beginning. So this regular changing of standard knowledge in the name of progress proves that they are always imperfect. It is a fact that they are imperfect, because they gather knowledge with imperfect senses. At any rate we cannot deviate from vedic knowledge. Regarding coming to Mayapur festival, you must come, because after that we are going to Manipur.

I will send your corrections to the editors. Thank you.

I hope this letter finds you well.

One Response to Letter to Scientist — Life Comes From Life