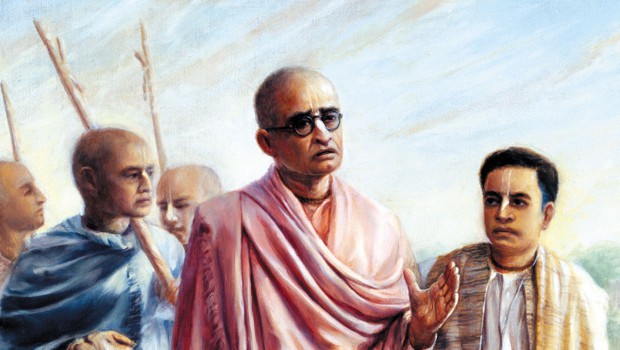 Sri Krsna manifest His eternal birth, the pure cognitive essence of the serving soul who is located above all mundane limitations, King Kamsa is the typical aggressive empiricist, ever on the lookout for the appearance of the truth for the purpose of suppressing Him before He has time to develop.

This is no exaggeration of the real connotation of the consistent empiric position. The materialist has a natural repugnance for the transcendent. He is disposed to link that faith in the incomprehensible is the parent of dogmatism and hypocrisy in the guise of religion. He is also equally under the delusion that there is no real dividing line between the material and the spiritual, he is strengthened in his delusion by the interpretation of scriptures by persons who are like-minded with himself. This includes all the lexicographic interpreters.

There is historical ground for such misgivings. Accordingly if the empiric domination is to be preserved in tact it would be necessary not to lose a moment to put down the transcendental heresy the instant it threatens to make its appearance in earnest. King Kamsa, acting on this traditional fear is never slow to take the scientific precaution of deputing empiric teachers of the scriptures, backed by the resources of dictionary and grammar and all empiric subtleties to put down, by the show of specious arguments based on hypothetical principles, the true interpretation of the eternal religion revealed by the scriptures.

Kamsa is strongly persuaded that faith in the transcendental can be effectively put down by empiricism if prompt and decisive measures are adopted at the very outset. He attributes the failure of atheism in the past to the neglect of the adoption of such measures before the theistic fallacy has had time to spread among the fanatical masses.

But Kamsa is found to count without his host. When Krsna is born He is found to be able to upset all sinister designs against those who are apprised by Himself of His advent. The apparently causeless faith displayed by persons irrespective of age, sex and condition may confound all rabid empiricists who are on principle adverse to the Absolute Truth Whose appearance is utterly incompatible with the domination of empiricism.

But no adverse efforts of the empiricists, whose rule seems till then to be perfectly well-established over the minds of the deluded souls of this world can dissuade any person from exclusively in following the Truth when He actually manifests His birth in the pure cognitive essence of the soul.

Putana is the slayer of all infants. The baby, when he or she comes out of the mother’s womb, falls at once into the hands of the pseudo-teachers of religion. These teachers are successful in forestalling the attempts of the good preceptor whose help is never sought by the atheists of this world at the baptisms of their babies. This is ensured by the arrangements of all established churches of the world. They have been successful only in supplying watchful Putanas for effecting the spiritual destruction of persons from the moment of their birth with the cooperation of their worldly parents. No human contrivance can prevent these Putanas from obtaining possession of the pulpits. This is due to the general prevalence of atheistic disposition in the people of this world.

The church that has the best chance of survival in this damned world is that of atheism under the convenient guise of theism. The churches have always proved the staunchest upholders of the grossest form of worldliness from which even the worst of non-ecclesiastical criminals are found to recoil.

It is not from any deliberate opposition to the ordained clergy that these observations are made. The original purpose of the established churches of the world may not always be objectionable. But no stable religious arrangement for instructing the masses has yet been successful. The Supreme Lord Sri Caitanya Mahaprabhu, in pursuance of the teachings of the scriptures enjoins all absence of conventionalism for the teachers of the eternal religion. It does not follow that the mechanical adoption of the unconventional life by any person will make him a fit teacher of religion. Regulation is necessary for controlling the inherent worldliness of conditional souls.

But no mechanical regulation has any value, even for such a purpose. The bona-fide teacher of religion is neither any product of nor the favourer of, any mechanical system. In his hands no system has likewise, the chance of degenerating into a lifeless arrangement. The mere pursuit of fixed doctrines and fixed liturgies cannot hold a person to the true spirit of doctrine or liturgy.

The idea of an organised church in an intelligible form, indeed, marks the close of the living spiritual movement. The great ecclesiastical establishments are the dikes and the dams to retain the current that cannot be held by any such contrivances. They, indeed, indicate a desire on the part of the masses to exploit a spiritual movement for their own purpose. They also unmistakably indicate the end of the absolute and unconventional guidance of the bona-fide spiritual teacher. The people of this world understand preventive systems, they have no idea at all of the unprevented positive eternal life. Neither can there be any earthy contrivance for the permanent preservation of the life eternal on this mundane plane on the popular scale.

Those are, therefore, greatly mistaken who are disposed to look forward to the amelioration of the worldly state in any worldly sense from the worldly success of any really spiritual movement. It is these worldly expectants who become the patrons of the mischievous race of the pseudo-teachers of religion, the Putanas, whose congenial function is to stifle the theistic disposition at the very moment of its suspected appearance. But the real theistic disposition can never be stifled by the efforts of those Putanas. The Putanas have power only over the atheist. It is a thankless but salutary task which they perform for the benefit of their unwilling victims.

But as soon as theistic disposition proper makes its appearance in the pure cognitive essence, of the awakened soul, the Putanas are decisively silenced at the very earliest stage of their encounter with new-born Krsna. The would-be slayer is herself slain. This is the reward of the negative services that the Putanas unwittingly render to the cause of theism by strangling all hypocritical demonstrations against their own hypocrisy.

But Putana does not at all like to receive her reward in only form which involves the total destruction of her wrong personality. King Kamsa also does not like to lose the services of the most trusted of his agents. The effective silencing of the whole race of pseudo-teachers of religion is the first clear indication of the appearance of the Absolute on the mundane plane. The bona-fide teacher of the Absolute, heralds the Advent of Krsna by his uncompromising campaign against the pseudo-teachers of religion.

9 Responses to Organized Religion — Demons preaching from the Pulpits