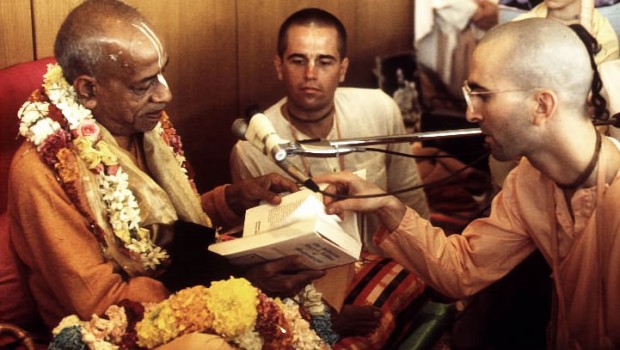 “Dharma [in the form of bull] asked: Madam, are you not hail and hearty? Why are you covered with the shadow of grief? It appears by your face that you have become black. Are you suffering from some internal disease, or are you thinking of some relative who is away in a distant place?”

Actually the cows… When I was in New Vrindaban, our Kirtanananda Maharaja purchased one cow without calf. (someone says, “Children have to go out”) Yes. So that cow was actually crying because the calf was taken away for slaughtering. It is not that they have no soul, they cannot understand, they have no feeling. But they are helpless. Everything is there. The butchers, the cow slaughterers, or their supporters, they say wrongly that the animal has no soul. This is a rascal philosophy. Why animal has no soul? The question should be…

Here Yamaraja is addressing the cow as amba, mother. “Why you are so unhappy? From your face it appears.” So Yamaraja was foolish man, that he is addressing a cow as mother? This is civilization. It doesn’t matter one is appearing as a cow or a man or a dog or a demigod or a civilized man, uncivilized man. One who knows that the soul is there… Unless there is soul, how Yamaraja is asking the cow, “It appears that you are very much bereaved, so what is the cause, mother, of your bereavement?”

Pandita, one who is learned, he knows that all of them, animals, trees, plants or human being or demigods, everyone is the spirit soul. Now they are simply encaged in different bodies according to different karma. The soul, part and parcel of God, wanted to imitate God’s supremacy, and they wanted to enjoy. But in the spiritual world there cannot be second enjoyer. The only enjoyer is Krsna. Bhoktaram sarva-loka, bhoktaram sarva-yajnanam sarva-loka… He is the supreme proprietor, supreme being. In the dictionary you will find, “the supreme being.” “Supreme being” means nobody can be equal to Him, nobody can be greater than Him. That is, means supreme. So how one can become an imitator of Krsna? That is not possible. That imitation is possible here in this material world, because they are all rascals. So one rascal may claim that “I am God,” imitation, but as soon as he claims like that, any intelligent man knows that he is a rascal. That’s all. That very assertion will establish that he is a rascal.

Nobody can be God. God is one. And religion is also one. If God is one, then how religion can be different? Just like state laws. If the state is one, the law is also, everyone. Now the ordinary law, just like “Keep to the right,” if somebody says, “No, this is Christian law. Hindu law, ‘Keep to the left,’ ” will it be accepted? If I say, “I am Hindu, I am coming from India. My law is ‘Keep to the left.’ ” In India, the same thing, “Keep to the left.” And many other countries also. So here, because all these laws are made by rascals, in some country you keep to the left, some country you keep to the right. And which is correct, that is unknown. That is unknown. Therefore for the foolish person, “This is Hindu religion,’ ” “This is Christian religion,” and “This is Muhammadan religion.” Religion is one. How it can be Hindu religion, Christian religion? No. Religion is one. God is one. Therefore religion is one. Because religion means the law or the order given by God. That is religion. Simple definition.

Now, “Supreme I cannot see.” You cannot see. Therefore Supreme’s name, another name is Adhoksaja, “beyond the perception of your experimental knowledge.” That is called adhoksaja. Adhah-krta aksaja jnanam yatra. By your experimental knowledge you cannot understand. The same thing, that if you say, “I do not see the President of the United States. Therefore I do not believe this law, ‘Keep to the left.’ ” No, no. If you don’t believe, that is your business. But as soon as you violate this law, immediately you are under prison. You have seen the President or not seen, it doesn’t matter. The law will act. Similarly, you believe in God or do not believe in God. It doesn’t matter. The God’s order, the God’s law, will work on. And for this purpose the material energy is there.

So here it is said… Yamaraja is inquiring the cow because she is very much threatened by the butcher. The butcher was ready to kill, and she was trembling. So Yamaraja is asking, kaccid bhadre anamayam atmanas te. Just like we would ask some friend or relative that “I think you are all right?” The same thing is being inquired. “Why you are appearing so much bereaved? What is the cause?” Alaksaye. “It appears that you are within very sorry.” Alaksaye bhavatim antaradhim. “Some distress within yourself.” Dure bandhum socasi. Because in this material world we are always distressed. It is not that we are happy. That is an illusion. That is not fact. We are always distressed. So there are three kinds of distresses: Adhyatmika, adhibhautika, and adhidaivika. Here it is inquired that bhavatim antaradhim. Adhi. And antara means within the body or within the mind.

So, “Are you suffering some pains on account of your body or mind?” This is called adhyatmika. Adhyatmika means the body. The body and the mind. That’s called adhyatmika. Adhibhautika, sufferings offered by other living entities. And adhidaivika. Adhidaivika means sufferings offered by the demigods. Just like famine, pestilence, earthquake. You have no hand. You may be a very big, big scientist, but when this trembling of the earth, “Oh, God save us, God save us, God save us.” (laughter) Yes. Even that sputnik… Our scientist… Where is scientist? What is that, sputnik? They were asking, “God shall…?”

Svarupa Damodara: Just as they were trying to go to the moon.

Prabhupada: What is the story? You can little explain.

Svarupa Damodara: That there was an explosion in the (indistinct), and they could not go to the moon. So they were in danger in outer space. So they were requesting all the people so to “Pray to God so that I can come back safe and sound to this planet.” (laughter)

Prabhupada: When they are in danger they pray to God for safe and sound, but when they go to the moon planet: “We are scientist.” (laughter) Just see how much foolish they are! When they go to the moon planet, at that time, “God give us permission, we may go”? No. “We are scientists. (laughter) We don’t care for God.” But when they are in danger, “God save us.” (laughter) Just see what kind of scientists they are. This is practical. I am very glad that our Doctor Svarupa Damodara has mentioned this in his book, Scientific Basis of Krsna Consciousness.

So that is the fact. And there is a version of Tulasi Dasa in Hindi. It is said sukse sabe hari bhaje, duhkhse saha hari bhaje, sukse bhaje khoya.(?) Or sukhase ara hari bhaje, tu duhkha hase hoya(?). It is very nice instruction. The instruction is that when one is distressed, everyone remembers God. Yes. Duhkhse saba hari bhaje. Saba means “all.” At that time… Just like in the last war, Second…, last war, when everything was in danger, Mr. Churchill started this movement B(?), and they were all going to churches–when the situation was very grave. And in Germany especially, because war was very, going on very seriously, so there was no men, so all the women, they went to the church and pray God, somebody… Woman means husband, son or father… Prayed, “Let my father come back” or “Let my husband come back” or “my son.” But nobody came back. So they became atheist. This is the version of my one German Godbrother friend. So he said that all of them became atheists. Why? They prayed so much to get back their husband or son or father: nobody came back. “Then there is no God.” This is their conclusion. That means, “God is our order supplier. God is our servant.” Just like I ask my servant or my disciple, “You do this,” and he must do it. We cannot accept God like that. God is neither going to be your servant.

So those who are going to religious life, making God as their servant, they will be failure. You must approach God as master. You should become servant. The so-called religionist, they accept God as their order-supplier servant: “I must pray to God.” Whenever there is some inconvenience, “I must pray,” or “I must… ” Not “must.” “At that time I shall pray, and then I shall finish that prayer, and God must supply. If God does not supply, then there is no God.” This is the general attitude. But that should not be done. The real religion is, as Krsna says in the Bhagavad-gita, is sarva-dharman parityajya mam ekam. First of all surrender. Then talk of mercy and this or that. Also, although God is very merciful, even those who are simply asking from God, not prepared to give anything, God is merciful, even though he…

Therefore He has given this field. “All right, you want to become another God or competitor of Me? You live in this material world and begin your life as Brahma. I give you first-class chance. And then gradually, you become the worm of the stool.” (laughter) This is called karma-kandiya-vicara. First of all we get our very opportunity. Just like you Americans, you have got good opportunity. I have several time mentioned that you have wealth, you have got education, you have got beauty, janmaisvarya, and heritage also. People outside your country, they know, “Oh, he is American. He is very advanced.” You have got respect. So this is, this is due to pious life. If one is pious, he gets all those opportunities. Janmaisvarya-sruta-sri. This is… Janma means to get birth in high family, aristocratic family, or to become the members of a big nation. This is called janma. Janma means birth. And aisvarya, opulence, money. Janma aisvarya sruta, aisvarya, and sruta. Sruta means education. And sri means beauty. These four things are outcome of previous pious life. So you have got this opportunity. You have got. Now you utilize these assets of life–nice birth, opulence, beauty, education–for Krsna consciousness. Otherwise, you take the chance of Brahma, and then go to become the worm of the stool. The law of karma is like that.

Thank you very much. (end)

6 Responses to Universal Religion — Religion is One (MP3 Audio)