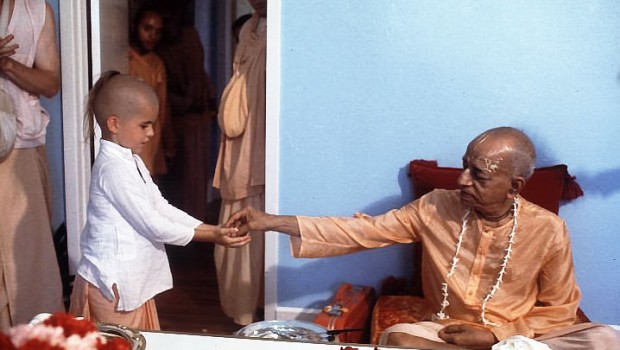 Dear Swami Bhaktivedanta,
I’ve read that your Krishna Consciousness is a non-sectarian science of the soul. How is it, then, that you follow some particular concept of God- Krishna rather than a more universal concept, such as the One, or the All-Pervading Light?

Krishna and the Vedic View
[A Question and Answer with Sirla Prabhupada, published in Back to Godhead magazine, 1968]

Dear Swami Bhaktivedanta,
I’ve read that your Krishna Consciousness is a non-sectarian science of the soul. How is it, then, that you follow some particular concept of God- Krishna rather than a more universal concept, such as the One, or the All-Pervading Light? I like your movement very much, but I do feel this to be a clear contradiction in your philosophy. Yours truly,
Owen Darcy

My dear Mr. Darcy,
Thank you for your interest, and for your question also. I assure you that Krishna is not a concept: He is the Supreme, Original Person. Everything that exists is His energy, and He is the sole Energetic. He pervades His energy because He has complete and limitless control over it. All that exists, then, is of Him, from Him, possessed, pervaded and maintained by Him- therefore He is the One, All-Pervading, and the Resting Ground of the Universes. But He is more even than this. He is thus held to be an Individual: the Whole is more than the sum of the parts. This omnipotence is called the Lord’s simultaneously one and different Nature.

Dear Swami,
I have always read that self-realization can only be attained by cutting oneself off from human society. Do you agree with this? Thank you,
Jereld Penne

Dear Mr. Penne,
No, I don’t agree. In India also this was long held to be true but my Spiritual Master, Sri Bhakti Siddhanta Saraswati taught that one can use the implements of modern civilization for the service of the Lord, and thus attain to the highest perfection. This was his great contribution. In the Bhagavad Gita, as well, Lord Sri Krishna says that he who preaches the message of God to his fellow men is the most dear devotee (Chaps. XVIII, verse 68). One must, of course, be among one’s fellow men in order to do this.

Dear Mr. Guttenroth,
Nirvana is the negation of material life; Krishna is the positive joy of spiritual existence.

Dear Swami,
Your philosophy states that the soul or Self is eternal, and that God, the Supreme Self, is also eternal. If this is so, then how is God to be considered the Creator ?
Sincerely,
Mary Welch

Dear Miss Welch,
Creator means the Source, and creation means the emanation from that Source. The Creator and the creation are both eternal- but the creation depends upon the Creator, and not vice versa. It is like the sun and the sunlight. They are always together, but the sun is supreme and independent, while the sunlight is subordinate. Still, they are not separable, as we are eternally inseparable from God.
Ever your well-wisher,
A.C. Bhaktivedanta Swami