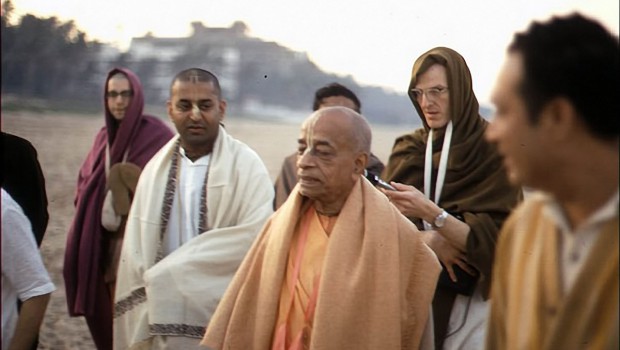 Ritvik–Representative of the Acharya, For the Purpose of Performing Initiations–Both First Initiation and Second Initiation. His Divine Grace has so far given a list of eleven disciples who will act in that capacity…

Madhya 24.330
Similarly, a disciple’s qualifications must be observed by the spiritual master before he is accepted as a disciple. In our Krsna consciousness movement, the requirement is that one must be prepared to give up the four pillars of sinful life-illicit sex, meat-eating, intoxication and gambling. In Western countries especially, we first observe whether a potential disciple is prepared to follow the regulative principles. Then he is given the name of a Vaisnava servant and initiated to chant the Hare Krsna maha-mantra, at least sixteen rounds daily. In this way the disciple renders devotional service under the guidance of the spiritual master OR HIS REPRESENTATIVE FOR AT LEAST SIX MONTHS TO A YEAR. He is then recommended for a second initiation, during which a sacred thread is offered and the disciple is accepted as a bona fide brahmana.

Note:we know that without becoming a Mahabhagavata it is an offense against the chanting of the holy name(3rd offense in chanting) to be worshipped as good as God. Ritvik –the representative of the acarya allows for this function of worshipping the acarya (Prabhupada) without slaughtering the spiritual lives of others.

Madhya 24.330
When one has attained the topmost position of maha-bhagavata, he is to be accepted as a guru AND WORSHIPED EXACTLY LIKE HARI, the Personality of Godhead. ONLY SUCH A PERSON IS ELIGIBLE TO OCCUPY THE POST OF A GURU.

Srila Prabhupada is REVEALING HIS POSITION AS THE JAGAD-GURU(SPIRITUAL MASTER OF THE ENTIRE WORLD). It is Prabhupada that has distributed the holy name(thru his books) all over the world. Krishna is His pure devotee Prabhupada’s property to give.

Antya 7.12
“in the Dvapara-yuga one could satisfy Krsna or Visnu only by worshiping opulently according to the pancaratriki system, but in the age of Kali one can satisfy and worship the Supreme Personality of Godhead Hari simply by chanting His holy name.” Srila Bhaktisiddhanta Sarasvati Thakura explains that unless one is directly empowered by the causeless mercy of Krsna, one cannot become the SPIRITUAL MASTER OF THE ENTIRE WORLD (JAGAD-GURU). One cannot become an acarya simply by mental speculation. The true acarya presents Krsna to everyone by preaching the holy name of the Lord throughout the world. Thus the conditioned souls, purified by chanting the holy name, are liberated from the blazing fire of material existence. In this way, spiritual benefit grows increasingly full, like the waxing moon in the sky. THE TRUE ACARYA, THE SPIRITUAL MASTER OF THE ENTIRE WORLD, MUST BE CONSIDERED AN INCARNATION OF KRSNA’S MERCY. INDEED, HE IS PERSONALLY EMBRACING KRSNA. HE IS THEREFORE THE SPIRITUAL MASTER OF ALL THE VARNAS (BRAHMANA, KSATRIYA, VAISYA AND SUDRA) AND ALL THE ASRAMAS (BRAHMACARYA, GRHASTHA, VANAPRASTHA AND SANNYASA). Since he is understood to be the most advanced devotee, he is called paramahamsa-thakura. Thakura is a title of honor offered to the paramahamsa. Therefore one who acts as an acarya, directly presenting Lord Krsna by spreading His name and fame, is also to be called paramahamsa-thakura.

“Representative of the acarya” is also mentioned SIMILARLY in (CC24.330 madhya)—this is the secret. Ritvik is the SAME.

Madhya 8.100
The name Radha is derived from this verse (Bhag. 10.30.28), from the words anayaradhitah, meaning “by Her the Lord is worshiped.” Sometimes the critics of Srimad-Bhagavatam find it difficult to find Radharani’s holy name, BUT THE SECRET IS DISCLOSED HERE IN THE WORD ARADHITAH, FROM WHICH THE NAME RADHA HAS COME. Of course, the name of Radharani is directly mentioned in other Puranas. This gopi’s worship of Krsna is topmost, and therefore Her name is Radha, or the topmost worshiper.

77-07-09.All Letter: All G.B.C., All Temple Presidents
Please accept my humble obeisances at your feet. Recently when all of the GBC members were with His Divine Grace in Vrndavana, Srila Prabhupada indicated that soon He would appoint some of His senior disciples to act as “RITVIK–REPRESENTATIVE OF THE ACARYA, FOR THE PURPOSE OF PERFORMING INITIATIONS, BOTH FIRST INITIATION AND SECOND INITIATION. His Divine Grace has so far given a list of eleven disciples who will act in that capacity:

In the past Temple Presidents have written to Srila Prabhupada recommending a particular devotee’s initiation. Now that Srila PRABHUPADA HAS NAMED THESE REPRESENTATIVES, Temple Presidents may henceforward send recommendation for first and second initiation to whichever of these eleven representatives are nearest their temple. After considering the recommendation, THESE REPRESENTATIVES MAY ACCEPT THE DEVOTEE AS AN INITIATED DISCIPLE OF SRILA PRABHUPADA by giving a spiritual name, or in the case of second initiation, by chanting on the Gayatri thread, just as Srila Prabhupada has done. THE NEWLY INITIATED DEVOTEES ARE DISCIPLES OF HIS DIVINE GRACE A.C. BHAKTIVEDANTA SWAMI PRABHUPAD, the above eleven senior devotees acting as His representative. After the Temple President receives a letter from these representatives giving the spiritual name or the thread, he can perform the fire yajna in the temple as was being done before. The name of a newly initiated disciple should be sent by the representative who has accepted him or her to Srila Prabhupada, to be included in His Divine Grace’s “Initiated Disciples” book.

Note: this July 9th 1977 letter was NEVER REVOKED BY SRILA PRABHUPADA. This being the case ALL THE NEWLY INITIATED DEVOTEES ARE DISCIPLES OF HIS DIVINE GRACE A.C. BHAKTIVEDANTA SWAMI PRABHUPAD for as long as ISKCON EXISTS.

4 Responses to Ritvik–Representative of the Acharya