His Divine Grace A.C. Bhaktivedanta Swami Prabhupada was a pure devotee of Lord Krishna and therefore his entire life, including his passing from this mortal world was a perfect example of Krishna consciousness. This film depicts his final pastimes.

During his last months in Vrindavana His Divine Grace continued to instruct his disciples, discuss the affairs of ISKCON and translate Srimad-Bhagavatam. On his request his disciples maintained 24 hour kirtan and readings from the scriptures.

Srila Prabhupada invited all his disciples to be with him as he passed the test we all must face. However, due to circumstances often beyond their control, most of his disciples were not present. Now those who choose to can experience those precious moments.

Although these scenes can be emotionally wrenching they do depict a rare transcendental event. The last chapter in Srila Prabhupada’s glorious life, “The Final lesson.”

Out of many thousands of men, one may endeavor for perfection and among many millions who have achieved perfection one may be a devotee of Lord Krishna. Such a devotee, who is fully peaceful, is extremely rare.

Being situated in his original Krishna conscious position a pure devotee does not identify with the body.

It’s exactly like the waters of the Ganges which remain pure although filled with bubbles, foam and mud during the rainy season. Those who are advanced in spiritual understanding bathe in the Ganges without considering the condition of the water.

Since we cannot visually experience the presence of the Supersoul, out of His immense compassion the Supersoul appears before us as a pure devotee, the spiritual master. Such a spiritual master is as worshipable  as Krishna is for in his dealings there are no activities but those of transcendental loving service to the Lord.

The verdict of all reveled scriptures is that even by a moment’s association with a pure devotee one can attain all success. That moment is human societies greatest treasure. Seeing the spiritual master with devotion and reverence is the perfection of one’s eyesight. Touching his lotus feet is the perfection of the sense of touch and glorifying his qualities is the tongues real activity.

Srila Prabhupada [translating Srimad-Bhagavatam] Karma hetu. If you engage in devotional service we get a different nature and if we engage in the basis of sense gratification the result is [not clear] And according to the association of different natures we get a body, karanam guna-sango ‘sya sad-asad-yoni-janmasu. Therefore we should always seek good association, devotee association. Then our life will be successful.

Jnana. If we live with good association then we cultivate knowledge. That means association. A man is known by his company. So if we have the chance of association with devotees then our character, nature [not clear]. By hearing, by discussing Srimad-Bhagavatam, this raja-guna, tama-guna is subdued, then sattva-guna remains. Nasta-prayesv abhadresu nityam bhagavata-sevaya. Then the sattva-guna, tama-guna cannot do us harm. Therefore Varnasrama dharma is so essential, that people remain in sattva-guna. Tama-guna, raja-guna, rajas tama bhava. Increases lust and greediness and that implicates the living entity to exist in this material world in many, many forms. That is very dangerous. Therefore they should be brought into sattva-guna by the establishment of   Varnasrama dharma.

How to bring people in sattva-guna. The Brahminical qualifications. Very neat and clean. Rise early in the morning, see Mangal-Aroti. In this way to stay in sattva-guna.

The body, mind and senses of the pure devotee, acting only for the satisfaction of the Lord, are transcendental and are taken charge of by the Supreme Personality of Godhead. Being awake to his constitutional position, the pure devotee is situated in samadhi, the highest perfectional stage of yoga. Being fully absorbed in devotional service, he does not care what is going on with the external body. Such a confidential devotee of the Lord sees in every moment, even a most difficult moment, the special mercy of the Lord.

Pure devotees are themselves places of pilgrimage. Because of their purity they are constant companions of the Lord and therefore they can purify even places of pilgrimage. For such a pure devotee there is no difference between living and dying because in this life he engages in pure devotional service and after giving up his body he engages in the same service in the spiritual world thus his devotional service is never hindered nor does he perceive the pangs of death.

The spiritual master’s eternal occupation is to expand the service of the Lord by training his disciples in a service attitude. This service attitude, along with knowledge of Krishna, is such a great gift that it is impossible to repay the benefactor.

Our dear Lord, O Supreme Personality of Godhead, because our association with material desires one after another we were gradually falling into a blind well full of snakes following the general populous but your servant Srila Prabhupada kindly accepted us as his followers and instructed us how to achieve the transcendental position. Therefore our first duty is to serve him. How could we leave his service?

In his absence therefore Srila Prabhupada’s words of direction are the pride of his followers. Their implicit faith in his words is their success.

O virtuous devotees, thus we have seen the departure of Srila Prabhupada and this is just to increase our desire for him because the more we hanker for him the more we will be freed from all material desires. 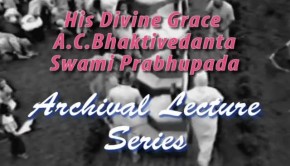