For three days the kids kept coming and staying late into the night. They had tasted the ecstasy! One girl said, I don’t want to go anywhere else. This is the only thing happening at the festival.

Overnight, several square miles of idyllic pastureland next to the Waikato River were transformed into a bustling tent-and-caravan metropolis. Hastily constructed booths supplying all manner of food, drink, and handicrafts flanked a mall extending from the main camping area to the stage and natural amphitheater half a mile away.

On a ridge overlooking the valley mall, tents offered everything from “Coffee and a Chat about Christ” to Tai Chi and Swedish massage.

Below the ridge, at the main entrance to the mall, something else was happening. There a seventy-five-foot banner atop two forty-foot masts announced HARE KRISHNA in eight-foot letters visible throughout the entire expanse of the festival. And all night colorful flashing lights kept these holy names of the Lord uppermost in people’s thoughts.

Lined up in formation were four tents: one to explain it in books and picture displays, one to show it in video movies, one to cook it up, and a big one (six thousand square feet) in which to sing and dance about it. What was “it”? Krishna’s mercy!

In the first tent, a statue of His Divine Grace A. C. Bhaktivedanta Swami Prabhupada, the founder and spiritual master of the Hare Krishna movement, sat on a massive gold-and-velvet throne. As people crowded in to see who he was, they exclaimed, “He looks so real!” “Is he meditating?” At the tables displaying his books, they learned who he was and what it is he taught. Day and night people clustered around the book tables lining the tent, asking questions, taking and reading the books–the devotees distributed twenty thousand in all.

In the main tent, His Holiness Dhrstadyumna Swami Maharaja would kick off the daily Program at 6 A.M. with a class in the Vedic scriptures. Then at 7, the Maharaja would hold a mantra meditation class. “Now I’m going to teach everybody how to chant Hare Krishna on these beads. It’s a very nice way of meditating on God, so whoever wants to learn this meditation come sit up front here close.” About one hundred people would crowd forward and get a set of beads. You could see people everywhere wearing their beads around their necks and chanting.

After the meditation, Dhrstadyumna Maharaja would thoughtfully and patiently answer questions from the audience: sometimes deeply personal, sometimes challenging, sometimes humorous. “If you don’t believe in material things, then why do you have so much equipment-tents, trucks, amplifiers?”

“We have to understand the difference between material and spiritual. Originally everything is spiritual, because everything emanates from the Supreme Spirit, God. But when we selfishly use something–whatever it may be–for our own sense gratification, that thing becomes material, because we’ve forgotten its relationship to God; And when we take that same thing and use it for the pleasure and service of God, then it regains its spiritual nature. So Krishna consciousness doesn’t involve giving up material things. It means giving up the perverted mentality of trying to enjoy these things apart from our relationship to God. If we came here today to sing and play about sex, violence, and drugs–well, that would be material. But instead we’ve come to glorify God and remind everyone of our eternal loving relationship with Him. So even our tents, trucks, and amplifiers are spiritual.”

When the tent was filled to overflowing, the Maharaja led the Hare Krishna Band on stage for a three-hour concert of transcendental music. Between songs, he explained the philosophical concepts behind the lyrics–karma, reincarnation, eternal life. The Maharaja explained, “Music is an expression of love. People try to love one another, but in the end they’re frustrated. Everyone’s singing, ‘Oh, give me a love that lasts forever’–but in the material world it never does. The ultimate love is the soul’s love for Krishna and His love for all souls. The highest form of music expresses love for God. That music is a transmission of Krishna’s tangible presence and loving pastimes.”

At the peak of the performance, Dhrstadyumna Swami jumped up and got the whole tent of onlookers on their feet to chant Hare Krishna and dance. Everyone enthusiastically chanted, clapped, twirled, and reached high in the air with upraised hands–the “liberated” position, free from the anxieties of material life. Then the Maharaja began throwing the marigolds decorating the stage. The devotees manifested huge baskets of flowers and suddenly there were flowers flying everywhere. It was a flower riot! The band rocked on for a solid hour. You could never forget it if you were there.

Then it was time. Twenty devotees were ready. Thousands of plates, cups, and spoons were ready. Huge buckets of vegetable, rice, sweets, juice nectar, puris, and poppers were ready. And thousands of hungry guests were really ready for the free lunch of delicious krsna-prasadam, food offered to God.

Serving spoons flew in and out of pots almost faster than you could see. And plateful after plateful went down into waiting mouths. After lunch: more music, plays, and an evening dinner to rival lunch.

For three days the kids kept coming and staying late into the night. They had tasted the ecstasy! One girl said, “I don’t want to go anywhere else. This is the only thing happening at the festival.” Others would ask, “What do you get out of this? It’s all free. Free books, free food. Someone has to pay. What do you get?”

And the answer: “Well it’s our ecstasy to serve you with Krishna, and Krishna provides. What’s more, the whole world could run like this. That’s right–a constant festival of Krishna consciousness.

“If we simply used the land to grow grains, fruits, vegetables, and nuts instead of for useless industries, we could produce more than enough for every New Zealander. Protect the cows, milk them, and distribute the milk. Chant Hare Krishna and dance joyfully, glorifying the Supreme Lord. This way of life solves all economic problems.

“After all, prosperity means having plenty of food, fresh air, clean water, a comfortable place to live, but above all, inner happiness–happiness that beams from your face. Why live a concocted life apart from God in concrete jungles where people hoarding big piles of paper are misunderstood to be wealthy?”

A lot of people agreed. As one man put it, “I could see the devotees were happier than all the other people at Sweetwaters, who were high on drugs and booze–the devotees were naturally high on their love of God. “ 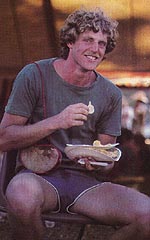 This World is Enchanted by Sex. [MP3 Audio] →