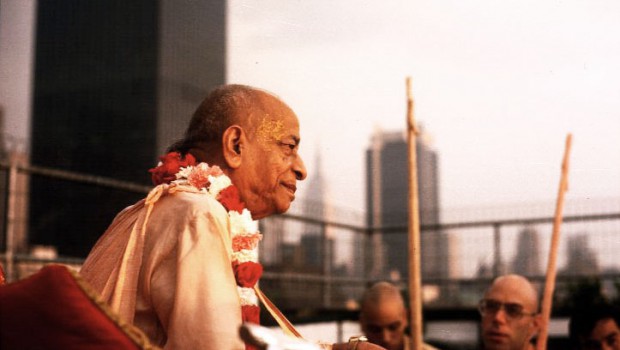 Krishna again came as Lord Caitanya to teach people how to surrender. And because we are following the footsteps of Lord Caitanya, the method is so sublime that even foreigners who never knew Krishna, they are surrendering. The method is so potent. So that was my purpose.

Interviewer: As confirmed by all the Vedic scriptures and by the great sages in the disciplic succession, He has a body made of eternity, bliss, and all knowledge. God has infinite forms and expansions. But of all His forms, His original form, His transcendental form, is as a cowherd boy. A form which He reveals only to His most confidential devotees. So go the teachings of Krsna as laid down in the Vedic literature. And of the sages in the disciplic succession, which I mentioned, one is our guest for this conversation today. He is His Divine Grace A. C. Bhaktivedanta Swami Prabhupada, founder of the International Society for Krishna Consciousness, foremost teacher in the West of the Krsna philosophy, which, moreover, he teaches not only by word, but by example. He came to this country in 1965 on orders of his spiritual master. As a Krsna disciple, he is the present human exponent of a line of succession going back five hundred years to the appearance in India of Lord Caitanya, and beyond that, to a time five thousand years ago when Lord Krsna Himself was on this planet and His words were recorded. Welcome, sir. What is Krsna consciousness?
Prabhupada: Yes. Krsna consciousness means that every living being, part and parcel of Krsna. Krsna has got many expansion. That is called personal expansion and separated expansion. So separated expansions we are, we living entities. But although we are very intimately connected with Krsna, somehow or other we are now separated by contact of material nature. So we have practically forgotten that we are part and parcel of Krsna. Actually that is the fact. And because… Just like a rich man’s son. Somehow or other, he has forgotten his father, and he’s loitering in the street as a poor man. But actually that is not his position. He has forgotten simply. So our, this Krsna consciousness movement means we are trying to invoke that original consciousness that he’s part and parcel of Krsna. Why he should remain in this material world and suffer the threefold miseries? So we want to revive that original consciousness. The original consciousness is Krsna consciousness. Just like a man born of a lord’s family, his title should be the lord’s family. But unfortunately, forgetting his own home, he is accepting some menial title. So our whole Vedic literature is meant for that purpose, to revive his original consciousness. Aham brahmasmi.
Interviewer: You came, sir, to this country in 1965, as I said, on instructions or orders given you by your spiritual master. By the way, who was your spiritual master.
Prabhupada: My spiritual master was Om Visnupada Paramahamsa Bhaktisiddhanta Sarasvati Gosvami Prabhupada.
Interviewer: Now in this line of succession that we were talking about earlier, this disciplic line of succession which goes way back, all the way back to Krsna Himself, right, was your spiritual master the previous one before you?
Prabhupada: Yes. The disciplic succession is coming from Krsna since 5,000 years. 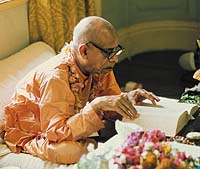