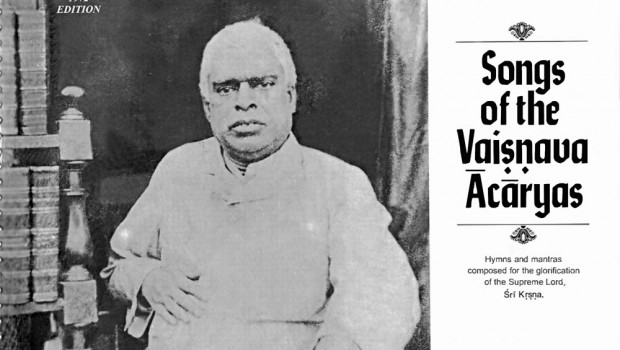 Forward from Songs of the Vaisnava Acaryas 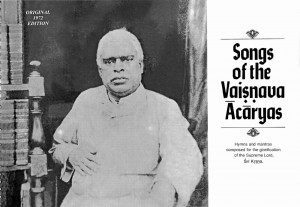 The International Society for Krishna Consciousness was established in New York in the year 1966. After my arrival in the United States in September of 1965, I personally underwent a difficult struggle, and in 1966 I rented a storefront and apartment at 26 Second Avenue. When ISKCON was incorporated, a boy named Chuck Barnett joined me, along with a few others, to form the nucleus for the institution’s future development. At this time I used to chant the Hare Krishna maha-mantra underneath a tree in Tompkin’s Square Park in New York. Sriman Barnett and another boy, Bruce, were the first to begin dancing in front of me, and others in the audience joined them. The New York Times published a report of this, with our picture and a headline declaring that I was attracting the younger generation to the Hare Krishna movement.

To download Songs of the Vaisnava Acaryas please click on the book cover image on the left.

When I became sick in 1967, I left the United States and returned to India. Srlman Acyutananda could not remain separated from me, and therefore he joined me in Vrindavan when I was staying there. Since then, Acyutananda Svam1 has worked very hard in India. He has preached extensively in Calcutta and other parts of Bengal, he has learned how to sing in Bengali and play mrdanga like a professional, and now he has compiled this book of Bengali songs with English explanations.

I am greatly pleased to see this collection of songs composed by Thakura Bhaktivinoda, Narottama dasa and other great acaryas of the Gaudiya Vaisnava community (sampradaya). Songs composed by the acaryas are not ordinary songs. When chanted by pure Vaisnavas who follow the rules and regulations of Vaisnava character, they are actually effective in awakening the Krishna consciousness dormant in every living entity. I have advised Sriman Acyutananda Svami to sing more songs of the Vaisnava padavadali and record them in books so that my disciples and others in the Western countries may take advantage of this chanting and thus advance in Krishna consciousness more and more.

I confer all my blessings upon Acyutananda Svami for his genuine attempt to advance in Krishna consciousness. I hope he will thus advance more and more and never be hampered by maya. We should always remember the danger of maya’s influence and endeavor to save ourselves from her great power. We must therefore always merge in the transcendental mellow of kirtana-rasa, for kirtana-rasa is the safest situation within this material world. Hare Krishna.

2 Responses to Original Songs of the Vaisnava Acaryas PDF Download