Sometimes I recited one story. This is for very instructive, that Narada Muni, he used to visit Narayana every day. So when he was passing on the road, so one very learned brahmana and taking thrice bath and everything very nicely, he asked Narada Muni, “Oh, you are going to Lord. Will you inquire when I shall get my salvation?” “All right. I shall ask.” And then a cobbler, he was under the tree, sewing the shoes, old shoes. He also saw Narada Muni. He also inquired, “Will you kindly inquire from God when my salvation is…?” Now, when he inquired Krsna, Narayana… Narada Muni goes generally to Narayana, in another planet. So “Yes, two, one brahmana and one cobbler, they inquired like this. May I know what is their destination?” So Narayana said, “Well, yes, the cobbler, this after giving up this body, he’s coming here at Vaikuntha.” “And what about that brahmana?” “Oh, he has to remain there still so many births, or I do not know when he’s coming.” So Narada Muni was astonished, that “I saw that he’s very nice brahmana, and he’s a cobbler. Why is that?” So he inquired that “I could not, cannot understand the mystery. Why You say that cobbler is coming this, after this body, and why not this brahmana?” “Oh, that will, you’ll understand. If they inquire that ‘What Krsna, or Narayana, was doing in the, in His abode,’ so just explain that He was taking one elephant, “Through the hole of a needle, He’s pulling an elephant this side and this side.” “All right.” So when he again approached the brahmana, the brahmana said, “Oh, you have seen Lord?” “Yes.” “So what was the Lord doing?” “He was doing this: through the point of a needle He was pushing one elephant this way and that way.” “Oh, therefore I have no faith in your… I, I, I have got all respect for your garb, but we don’t believe all this nonsense.”

Then Narada could understand, “Oh, this man has no faith. He simply reads book. That’s all.” And when he went to the cobbler, he also asked, “Oh, you have seen? What Narayana was doing?” He also said that “He was doing like this…” Oh, he began to cry, “Oh, my Lord is wonderful. He can do anything.” So Narada inquired, “So do you believe that Lord can push one elephant through the holes of a needle?” “Oh, why not? I must believe.” “Then what is your reason?” “Oh, my reason? I am sitting under this banyan tree, and so many fruits are falling daily, and in each fruit there are thousands of seeds, and each seed there is a tree. If in a small seed there can be big tree like that, is it very impossible to accept that Krsna is putting one elephant through the holes of a needle? He has kept such a nice tree in the seed.” So this is called belief. So unbelievers and believer means the believers, they are not blind believers. They have reason. If by Krsna’s process, by God’s process, or nature’s process, such a big tree can be put within the small seed, is it very impossible for Krsna to keep all these planets floating in His energy? So we have to believe. We have no other explanation. But we have to understand in this way. Our reasoning, our argument, our logic should go in this way.

So those who are devotee… Just like the cobbler. He may be a cobbler. They believe everything. And those who are not devotee, they’ll say, “Oh, these are all bluffs. It is all bluff.” But they are not bluff. It is simply meant for the devotees. They can understand. The nondevotees, they cannot understand.

6 Responses to The Brahmin and the Cobbler 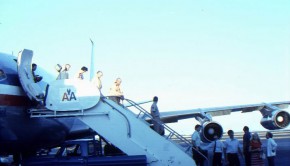