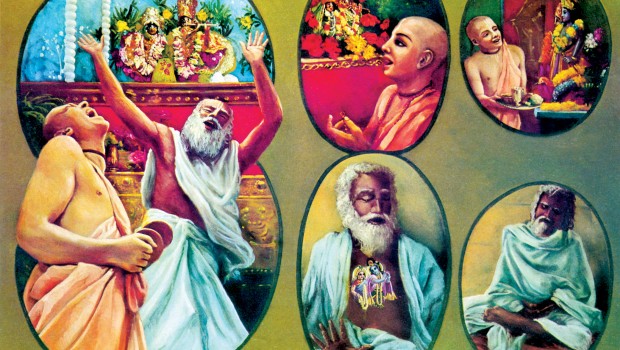 Although there are thousands and thousands of philosophical and spiritual groups around the world most of them are following one of four basic philosophies: personalism, yoga, impersonalism or voidism. There are also a few other athiestic philosophies which try to explain the existence of the universe and the living entities without any spiritual connection but we will not discuss them here.

All philosophers and followers of religion naturally question about the nature of the Supreme and they also question what is the ultimate perfection, the destination which the perfect living beings attain:

These four philosophies—personalism, yoga, impersonalism and voidism—appear time and time again in slightly different variations all over the world. Really you can not find any other philosophy. Sometimes there is some mixture but these are the basic four elements.

So what is correct? In India so many believe “whatever you think, whatever you accept—that is good for you.” This is not true but it is a very common belief among Indian philosophers. Something does not become correct and good for you just because you believe it.

To discover the truth we have to find a reliable authority and all of these philosophers except the voidists/Buddhists accept the Vedas as their authority. So the personalists, impersonalists and yogis all share the same authority / scriptures—the Vedas—while the Buddhists/voidists reject the Vedas.

The void philosophy comes from Lord Buddha who is accepted in the Vedas as an incarnation of Vishnu. But he preaches against the Vedas. He said: “I condemn any scripture that condones animal killing” and because the Vedas contains references to animal sacrifices he rejected the Vedas and went on to present his own philosophy based on the principle of ahimsa, non-violence. He preached that non-violence is the highest religious principle. Although I do not have the space to get into it in great detail here but his purpose was special.

At the time Lord Buddha was preaching in India the whole country had become meat-eaters and they were justifying the animal-killing by references in the Vedas related to animal-sacrifice. Meat-eaters are not able to understand much philosophy and they were also atheistic. You can not ask an atheist to surrender to God—he will just get angry.

In this situation in India Lord Vishnu appeared as Lord Buddha—he is the Supreme Lord—but he said “I am not God…” and he presented a philosophy that was very attractive to the meat-eating atheists of the time. In his philosophy there is no god, no eternal soul and the ultimate destination is nirvana—the void—nothingness… But Lord Buddha’s main purpose, the main point of his preaching was: ahimsa parama dharma, “non-violence is the highest religious principle.” So with this preaching Lord Buddha was able to convince the Indian people to become vegetarians—and that is really the only purpose of his preaching and his concocted philosophy.

Once the Indian people became vegetarians by the strength of Lord Buddha’s preaching they were able to understand more subtle philosophical points and Lord Shankaracharya who is an incarnation of Lord Shiva, appeared and easily defeated the Buddhist philosophy and re-established the authority of the Vedas. Shankaracharaya is an incarnation of Lord Shiva and he was also unable to give the people the ultimate truth because they were still atheists following the Buddhist philosophy and still unwilling to surrender to the Supreme Lord. So Shankaracharya presented a misrepresentation of the Vedas, particularly the Vedanta Sutra, in which he attempts to eliminate any personal aspects of the Supreme Lord by word-jugglery and false logic. Although the Vedanta Sutra clearly describes the Supreme Lord as personal in the ultimate issue his commentary, the sariraka-bhasya, exclusively stresses the impersonal all-pervasive energy of the Supreme Lord as the ultimate and completely denies any personal aspect at all. The teachings of Shankaracharya are often referred to as “covered Buddhism” because basically he has presented many of the Buddhist ideas but supported them by a misinterpretation of the Vedanta Sutra. So he has simultaneously re-established the authority of the Vedas and also presented a misinterpretation of the Vedas.

it is stated in the Padma Purana that Lord Siva appeared as a brahmana in the age of Kali to preach the Mayavada philosophy, which is nothing but a type of Buddhist philosophy:

So the athestic impersonal and voidist philosophies that now flood the whole world all stem from the preaching of Lord Buddha and Lord Shankaracarya.

The Buddhist/voidist philosophy is incorrect. There is no factual basis in it at all and any thoughtful philosophically inclined person can easily see the many flaws in it. It is completely in contradiction with the Vedas which every other philosopher accepts—although they have their different interpretations. The Buddhist philosophy is sunyavadi—or zero. Their idea is to make everything zero. The Buddhist will look at everything in the world and see it is ultimately a source of suffering so he will say that all these sources of suffering should be eliminated. And then ultimately when everything is eliminated you come to nirvana which means to finish all the varieties and to become zero. This is of course not a very attractive proposal. We want pleasure, we want happiness—but the Buddhists are frustrated—they think happiness and pleasure are impossible because they only have information about material pleasure which they correctly realize is not actually pleasure at all—so they conclude the best thing is to cease to exist—nirvana—to become zero… This is, in reality, not possible because the soul is eternal. It can not be killed or cease to exist under any circumstances whatsoever. So this Buddhist/voidist idea of nirvana is simply impossible. It is wrong, incorrect, impossible.

So for bona-fide philosophies we can reduce the list to only three: personalist, yogi and impersonalist. All these three philosophies are accepted in the Vedas as being bona-fide ways of understanding at least a part of the Lords energies.

These three divine aspects can be explained by the example of the sun, which also has three different aspects, namely the sunshine, the sun’s surface and the sun planet itself. One who studies the sunshine only is the preliminary student. One who understands the sun’s surface is further advanced. And one who can enter into the sun planet is the highest.

The sunshine, the sun disc and the inner affairs of the sun planet cannot be separated from one another, and yet the students of the three different phases are not in the same category. (from Srila Prabhupada’s purport to Bhagavad-gita 2.2)

So this is the key to understanding the three philosophies: personalism, yoga and impersonalism. The personalists realize Krishna—the Supreme Personality of Godhead and they realize everything. The Paramatma form of the Lord in the hearts of all living entities upon which the yogis meditate is an expansion of Krishna—so if one realizes Krishna he also realizes His Paramatma feature. The impersonal effulgence is simply the glare or shining that is eminating from the transcendental body of Krishna. So if one can see the transcendental body of Krishna naturally he can also see the shining effulgence emanating from Krishna’s body—that is the Brahmajoti, the destination of the impersonalists.

So the three types of philosophers: personalists, yogis and impersonalits are all realizing different aspects of the same Supreme Personality of Godhead, Krishna. So they are all studying the same subject however the personalists are able to simultaneously understand and appreciate all the different energies and expansions of Krishna but the yogis are only able to see the Paramatma form of the Lord in their hearts and the impersonal energy of the Lord and the impersonalists are only able to realize the Brahmajoti, the impersonal, all-pervading aspect of the Supreme Lord.

So the realization of Krishna as the Supreme Personality of Godhead is the complete realization of the Absolute Truth and the yogis and impersonalists have only partial realization—but they are realizing and studying the same Krishna—their vision is limited to particular aspects only.

There are many different sampradayas or groups of devotees in India and they are realizing different aspects of the Supreme Lord or have slightly different philosophical outlooks. We are the followers of Lord Sri Caitanya Mahaprabhu and Srila Prabhupada describes Lord Caitanya’s philosophy of acintya-bheda abheda-tattvam (inconcieveably simultaneously one and different) as:

“Attraction for water depends on the purity of the taste, and this pure taste is one of the energies of the Lord. The impersonalist perceives the presence of the Lord in water by its taste, and the personalist also glorifies the Lord for His kindly supplying water to quench man’s thirst. That is the way of perceiving the Supreme. Practically speaking, there is no conflict between personalism and impersonalism. One who knows God knows that the impersonal conception and personal conception are simultaneously present in everything and that there is no contradiction. Therefore Lord Caitanya established His sublime doctrine: acintya-bheda and abheda-tattvam-simultaneously one and different.”

So there is no contradiction between the personal aspect of Krishna in Krishna consciousness and the impersonalists or the yogis understandings. However the devotees of Krishna take offense at the Mayavadis who following the Sariraka-bhasya commentary of Vedanta Sutra by Shankacharaya try to establish that the impersonal aspect is supreme and that any time Krishna appears He is in maya and all of Krishna’s pastimes are also maya. (That is why we call them “Mayavadis”—because they consider that Krishna and His pastimes are maya.) So the Vaisnavas have a very big disagreement with the Mayavadis but that will be the subject of another article. 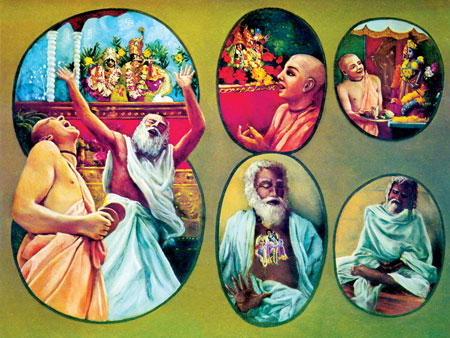 198 Responses to The Four Philosophies: Impersonalism, Yoga, Personalism and Voidism 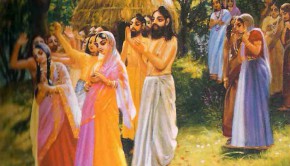 The Invisible Hand of the Lord →