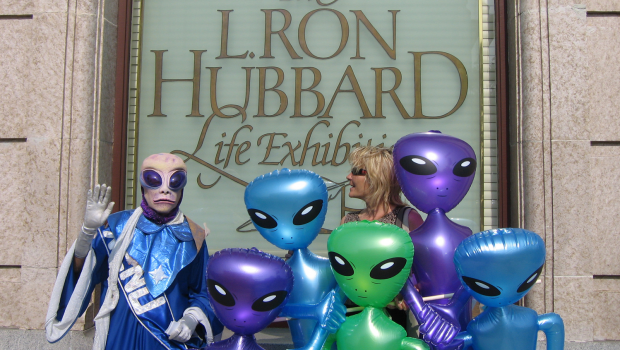 The Secret Teachings of Scientology

Would you like to hear a wild story? Are you sitting comfortably? Right, let’s begin: 0nce upon a time (75 million years ago to be more precise) there was an alien galactic ruler named Xenu. Xenu was in charge of all the planets in this part of the galaxy, including our own planet Earth. In those days, Earth was called Teegeeack.

Xenu had a problem. All of the 76 planets he controlled were over-populated. Each planet had on average 178 billion people. He wanted to get rid of the excess population, so he formulated a plan.

With the help of renegades, Xenu took complete control and defeated the good people and the Loyal Officers. Then, with the help of psychiatrists, he called in billions of people for “income tax inspections,” but they were instead given injections of a paralyzing mixture of alcohol and glycol. Then they were put into space planes that looked exactly like DC8’s except they had rocket motors instead of propellers.

These DC8 space planes flew to planet Earth where the paralyzed people, numbering in the hundreds of billions, were stacked around the bases of volcanoes. When everyone had been piled on Teegeeack, H-bombs were lowered into the volcanoes. Xenu then detonated all the H-bombs and everyone was killed.

The story doesn’t end there though. Since everyone has a soul (called a “thetan” in this story), Xenu had to trick the souls into not coming back. So while the hundreds of billions of souls were being blown around by the nuclear winds, he had special traps that caught the souls in electronic beams – the electronic beams were sticky, like fly-paper

After he had captured all these souls, he had them packed into boxes and taken to huge cinemas. There the souls had to spend days watching special 3D motion pictures that told them lies about what life should be like, and these films confused them and tricked them into believing things that were not true. They were shown “false” pictures and were told ‘false” things, including stories about Christianity, Judaism, Islam and other religions. In this story, this process is called “implanting.”

When the films ended and the souls left the cinema, they began to stick together in groups. They had all seen the same film and thought they were the same “person.” They clustered in numbers of a few thousand. There were only a few living bodies left, so they stayed in clusters and inhabited these bodies – our ancestors.

As for Xenu, the Loyal Officers finally overthrew him and locked him away in a mountain on one of the planets. He is kept there by a force-field powered by an eternal battery. Xenu is still alive today.

That is the end of the story And so today everyone is full of these clusters of souls, called “body thetans.” If each of us is to be a free soul, then we must remove all our body thetans and pay enormous sums of money to do so. And the only reason people believe in God, Christ, Muhammad or Satan is because it was in the film their body thetans saw 75 million years ago.

Well what did you think of that story? What? You thought it was ridiculous? Sort of like Battlefield Earth?

We think so too. This space opera, however, is the core belief of the religion known as Scientology.* If its members had known about this story when they first joined, then they would never have gotten involved. It is revealed when you reach one of their secret levels called “OT III .” After that, you are supposed to rid yourself of these body thetans through telepathic communication. You must pay a lot of money to get to this level, or you have to work very hard for the organization for many years, and for extremely low pay.

This leaflet is a warning. If you choose to become involved with Scientology, then we would like you to do so with your eyes open and fully aware of the sort “teaching” you will receive. The story of Xenu is the punchline to a very long and expensive joke.

Most of the Scientologists who work in the Dianetics* centers and so-called “Churches” of Scientology do not know about Xenu since they are not given this information until they reach Scientology’s upper levels. It may take them many years to attain this, if they ever do. Those who do know are forced to keep it a secret and do not tell it to neophytes. 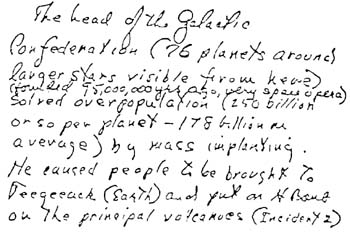 Part of the first page of the secret OT III document in L. Ron Hubbard’s own handwriting.

Now you know their big secret – for which an individual pays hundreds of thousands of dollars. Don’t let that deter you from joining though.

FEEL FREE TO COPY AND DISTRIBUTE THIS FLYER

* Dianetics and Scientology are trademarks of the Religious Technology Centre. This document is not connected with that organization in any way.

6 Responses to The Secret Teachings of Scientology