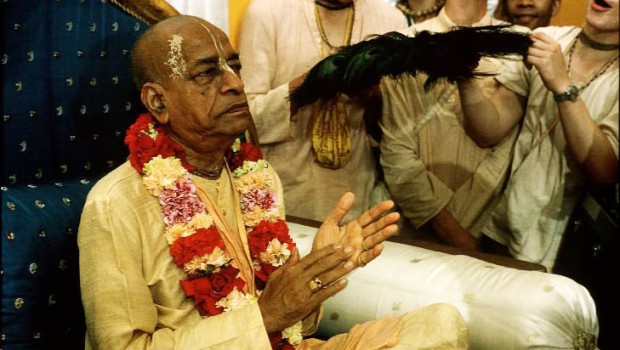 Srila Prabhupada is the Founder Acharya for Hare Krishna Movement. He is the ONLY reason anyone knows the words “Hare Krishna” in main stream culture. He produced more literature (books, conversations, letters, records, and lectures) than any other Vaisnava that lived during his time or lived after His Vapu association.

He opened more then one hundred temples all over the world. He wrote over 7,000 personal letters to his disciples, published in five volumes of books. He went around the world 12 times. He created a monthly magazine, “Back to Godhead,” which at one point was distributed in excess of one million copies per month. He gave lectures on Srimad-Bhagavatam and Bhagavad-gita As It Is, compiled into 18 volumes of books. He authored over 140 books, all in the matter of 11 years time. His devotees appeared in over 75 major Hollywood feature films chanting the Hare Krishna Mantra. He began at the age of 69. He slept less than 4 yours a day. He was the only one ever recorded fainting while distributing His “Back To Godhead Magazine” before He came to America. His writing is absolutely perfect in every way and does not need any adjustments whatsoever.

Srila Prabhupada never settled nor did His disciples. He constantly worked day and night in spreading Krishna consciousness and often moved His disciples around the world, managing everything perfectly, despite having disciples who wanted to succeed Him and who made many mistakes along the way. Srila Prabhupada never spoke anything different then what Lord Krishna spoke. He personally brought Krishna consciousness to the WORLD in its most pristine, accurate, and perfect form!

4 Responses to The Unlimited Glories of Srila Prabhupada

The Simple Process of Bhakti Yoga Under Srila Prabhupada’s Guidance →