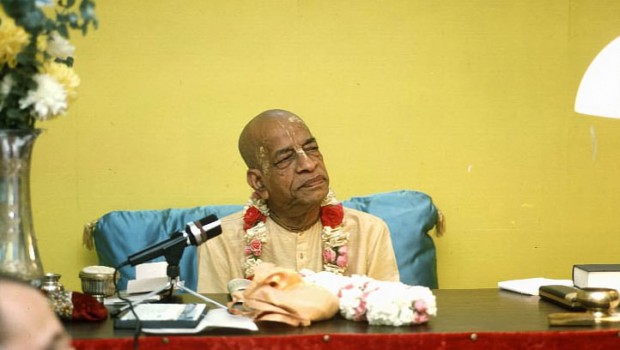 The impersonalists masquerade as Vedantists, but actually they are defying Vedanta. All the Vedas affirm it vehemently that the Supersoul and the soul are two different identities, although qualitatively one. But the impersonalists they accept Vedas as authority, but they go against the verdict of the Vedas.

Please accept my blessings. I beg to acknowledge receipt of your letter dated the third of March, 1969, and I think I shall be able to go to your center from Boston. There is an important engagement in Boston on the 24th April, and perhaps next on the 29th and I think after finishing these I can go to your place. So you can fix up your program in consultation with Satsvarupa. The idea of inviting everyone to Sankirtana in a larger meeting hall is very good. Instead of attending small groups of meeting, we can arrange to assemble them at one place–that will be less laborious and more convenient for us.

Prahladananda has sent me a check for $30 towards my book fund and I am very much thankful to him. I am enclosing the reply of his letter herewith.

Regarding your questions: The spark soul has certainly form which means hands, feet, etc. This we learn from Bhagavad-gita. The body is described there as Vasamsi, which means dress. So unless one has got originally hands and legs, how the dress, coat and pants and shirt, takes such form? Therefore the spirit soul has original form. When he is in the material energy the dress is evolved materially and when he is in the spiritual energy, the dress is evolved spiritually. This is also not very difficult to understand, as our students before coming to my contact, he was supposed to be materially dressed, attached to sense gratification, and after devoting himself in Krishna Consciousness, he is gradually developing a spiritual dress. That means attached to satisfying the senses of the Supreme.

Your second question, how the impersonalists mistake the difference between the soul and the Supersoul–The mistake is due to their obstinacy. The impersonalists masquerade as Vedantists, but actually they are defying Vedanta. In the Vedanta it is clearly said, the Original Source of all being; in the Upanisads it is clearly said that the Supreme is the Supreme being of all living beings. So all the Vedas affirm it vehemently that the Supersoul and the soul are two different identities, although qualitatively one. But the impersonalists they accept Vedas as authority, but they go against the verdict of the Vedas. Lord Caitanya has depicted this impersonalist class of men as more dangerous than the Buddhists. The Buddhists plainly declare that they do not accept the authority of the Vedas, but the impersonalists masquerade themselves as followers of Vedas, but actually they are hidden Buddhists. The idea is, if a person is actually fast asleep, it is easier to awake him but if a person pretends to be sleeping but actually is awake, then it is very difficult to wake him up. So from all Sastric point of view, the living entity and the Supreme Lord, or the Supreme Living Entity are always simultaneously different and one. One in quality, and different in quantity. this simple thing is understandable by any common man, but these impersonalists, they will simply invent jugglery of words to mislead innocent people. Therefore Lord Caitanya has warned not to associate with these impersonalist mayavadis because they will spoil one’s life by diverting one from devotional service.

It is very difficult to bring to reason the obstinate impersonalists. For example, Prahlada Maharaja, such a great authority, could not convert his father to devotional service, who preferred death, and still did not agree to accept that God is different from him. So better to avoid the impersonalists as far as possible.

Regarding your third question–“Why are there apparent time-gaps in the line of disciplic succession as listed in the Bhagavad-gita? Is Arjuna an instructor Spiritual Master and not an initiator Spiritual Master and therefore not listed?” The time gap mentioned by you is inevitable, because the disciplic succession sometimes becomes disconnected, as we find from the Bhagavad-gita. This is the influence of material energy, and to link it up again, it takes some time. That some time may appear to our calculation a big gap, but in relation with the eternal time, it is not even as instant. So this big gap or small gap of time is relative. Just like our 24 hours and Brahma’s 24 hours, there is much difference. Our 24 hours is not even a fraction of his second.

Your fourth question, about the “life force” mentioned in Chap. 4 of the Bhagavad-gita; I do not find that page. Please send me the page number in your next letter and I will explain.

Your fifth question, “Is this understanding of verse 18, chap. 4, correct; that the sage sees material activities as zero (inaction in action) and sees the devotee seated chanting as eternally active (action in inaction)?” Yes, action in inaction–action means to do something of which the result is enjoyed by the doer; that is action. But when things are done for Krishna, the result is enjoyed by Krishna. When we put ourselves in the position of enjoying good or bad reaction, then we suffer or enjoy. But action in Krishna Consciousness has nothing to do with such material suffering or enjoying. Therefore action in Krishna Consciousness is inaction, whereas a person doing nothing materially may appear to be inaction to others, but actually he is doing something for Krishna. In other words, the materialist thinks of the devotees as inactive. Similarly, the devotees think of the karmis as inactive–simply spoiling time, building sandcastles.

Your sixth, “Is it that the Supersoul controls every movement in this world through the agency of Maya and the inferior energy according to the desires of the dreamer-jiva?” Yes.

Your seventh question, “How is it that there is so much material “advancement” in the USA even though there is no formal demigod worship? Is a man after economic development automatically worshipping Lord Siva whether he is making Yajna or not?” Actually there is no material advancement in the USA. Material advancement means there is amply opportunity for eating, sleeping, mating, and defending. Superficially, it appears that in the USA there is sufficient provision of eating, sleeping, mating and defending, but actually nobody is safe even in his good apartment. I have got practical experience in New York. Several times my typewriter and tape recorders were stolen and the police could not take any action. There are many persons in the Bowery street, they have no shelter to live. So if a certain fraction of the people are supposed to be very materially happy at the cost of others, that is not material advancement. Had it been so, then why there are so many persons confused and frustrated? So actually there is no material advancement here. Here, I am seeing practically that Gaurasundara, such a nice intelligent and qualified boy, he has to work hard 12 hours simply for his subsistence. I think there are many instances like that, so this is not material advancement. You can call it capitalist advancement, and the reaction for such advancement is communism. Such movement is simply suppressed in your country, but actually the reaction is this. So the Western type of civilization, industrialism and capitalism, is no material advancement. It is material exploitation. When one gets the bare necessities of life, namely peaceful home, sumptuous eating, necessary sex life, and feeling of security, then it is called material advancement. In the absence of such four preliminary necessities of life, it is not at all material advancement–just try to understand. According to Vedic civilization, a man is supposed to be rich when he has got sufficient grains and cows. Here we have neither sufficient grains or cows, but you have got sufficient quantity of papers only–falsely thinking that it is money. When there is some catastrophe, this bunch of papers will neither supply milk or grain. They will be seen only and the man will starve.

Your eighth, “How can I explain how the light and heat from the single sun in this universe is able to reach so far? Is it a question of the receptivity of different planets?” We can see one sun only. So it is simply speculation whether there is one or more suns. But we get from authority of Sastra that there is one sun, in each universe, and the stars and moon reflects the light of this sun. There is one sun in the daytime, and it illuminates so nicely that all darkness is gone. But at night, you may argue, if these stars are so many suns, then why the darkness is still there??

Your ninth, “You once said that in case of a strong rush of sex desire to think of the Gopis, the Dearmost to Lord Krishna. Is there another help in case of anger or harshness?” Yes, think of Krishna, how He was angry on Hiranyakasipu and nobody could pacify Him, even Brahma with beautiful hymns. In anger also we can think of Krishna.

I hope this meets you all in good health, and I shall be looking forward to seeing Mr. Eric very soon, how nicely he is chanting and dancing. Your appreciation of the Bhagavad-gita As It Is is very much encouraging to me, and I thank you. Hope you are all happy,

4 Responses to Vedanta, Impersonalists and Buddhists