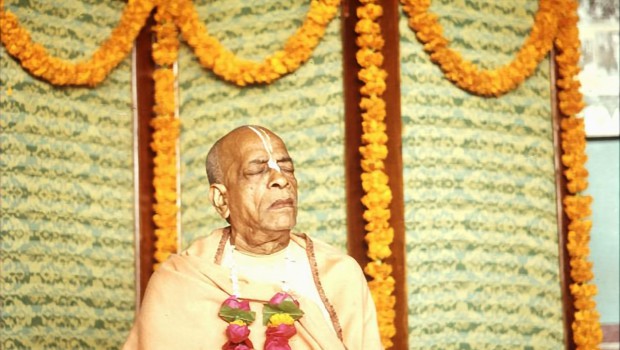 As Mahatma Vidura finally realized that it was useless to stay in a vicious assembly among his Kuru kinsmen, so sincere devotees should realize that ISKCON is no longer fit for sadhu-sanga. Srila Prabhupada preferred to stay in the homes of karmis rather than to stay with or even visit his so-called godbrothers in Bombay and Calcutta.

I can imagine how upsetting it was for you to be driven away from what is supposed to be Srila Prabhupada’s temple. Unfortunately many, many devotees have been driven away in similar or even much more violent confrontations.

Badri is a fool. He says you have caused much pain in the movement, and he wants to drive you away, although he supports fallen rascals just because they are GBCs, although they may be child molesters, thieves, or cow torturers. And what is your fault? That you are always telling them to follow Prabhupada’s order and initiate only on his behalf as ritviks.

The whole gbc has been thoroughly poisoned by this idea that Prabhupada is dead and can no longer initiate or be the ultimate authority in iskcon. The gbc’s deliberate plan all along has been to remove or kill Srila Prabhupada. Because they are unable to jusitfy their philosophical position, they can only try their best to drive out those who want to remain loyal to honesty, truth and Srila Prabhupada.

As Mahatma Vidura finally realized that it was useless to stay in a vicious assembly among his Kuru kinsmen, so sincere devotees should realize that iskcon is no longer fit for sadhu-sanga. Srila Prabhupada preferred to stay in the homes of karmis rather than to stay with or even visit his so-called godbrothers in Bombay and Calcutta. Yet as soon as Srila Prabhupada leaves, the gbc immediately consults these psuedo-sadhus, against all of Srila Prabhuapda’s warnings and thus they created a fiasco of ongoing spiritual disaster, which ruins thousands of devotees’ chances to go with Prabhupada gauranteed back Home back to Godhead. In frustration over politics and spiritual poverty, befooled iskcon devotees finally turn to sahajiya gurus and their cults outside iskcon and become even more lost and confused.

This worst tragedy in history may soon manifest externally as World War , in such a way that the whole world can fully taste the bitter fruits of Vaisnava aparadha.

As Kapindra Swami often says, we have to break our attachment to these people and their counterfeit temples and sanga. They only want to use Srila Prabhupada’s name and fame and opulence for their own sense gratification. As Srila Bhaktisiddhanta noted, such brahmins are willing to use the Shalagram Shila as a stone for breaking nuts. So it’s not surprising they want to break our heads to preserve their sinful lifestyles of easy living at others’ expense.

For me it is painful just hearing the names of these usurpers and poisoners. They are systematically poisoning the creepers of devotion planted and nourished by Srila Prabhupada with his long, painstaking effort of pure devotion. They are certainly the disciples of Kali Yuga that Srila Prabhupada and Srila Bhaktisiddhanta talked about. They are among the most dangerous and disgusting people on the planet. Why should we go there and see their faces and be polluted just by the sight of them?

Hope you are otherwise blissfull and well in Srila Prabhupada smarana.

6 Responses to Why Even Visit the ISKCON Temples? [Letter to Gauridas Pandit]