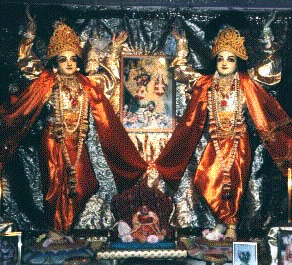 In Manhattan New York at the Lower Eastside is our humble temple of Their Lordships Sri Sri Nitai Gauranga. We daily practice devotion to the Lord by following the program given by His bonafide representative, our spiritual master Srila Prabhupada.

The day begins at 3:45 a.m when we rise and get ready to greet the Lord with song and dance at 4:30. The neighborhood is touched by a spiritual sound vibration of devotional chanting accompanied by drums, cartals and tambourine. Incense and Frankincens fills the air and ghee lamps give off pleasant light.

The morning program enlivens our spirit and we are thus engaged in the process of purification through sound vibration.

We daily hear from Srila Prabhupada on Srimad Bhagavatam, Nectar of Instruction and Bhagavad Gita.

Srila Prabhupada’s teachings are fully documented and preserved in His original books and audio recordings which we have complete on a set of 24 cdroms containg nearly 1200 hours of audio classes, morning walks and musical chanting.

The devotees here including myself, Madhavananda das (brahmacari), Kapindra Swami (Sanyassi), Bhakta Ian (brahmacari), mother Krishna Devi, Bhakta Carlos, Bhakta Ralph, Bhakta Gabriel and many other friends and visitors are all engaged in glorifying Lord Krishna in His most merciful incarnation as Caitanya Mahaprabhu.

The Lord is conspicuously present here in His Deity form and reciprocating with us in many ways. Our program is nicely regulated and we have a temple schedule open to the general public.

We are engaged in various services including Harinam Sankirtan, book distribution, prasadam distribution, mailorder distribution of books, tapes and cd’s, and maintenance of the temple program.

We feel that the magnetic influence of Krishna Consciousness will again take hold throughout the world as devotees come together in this way to listen to and glorify the spiritual master, Krishna’s bonafide representative Srila Prabhupada. Best wishes to everyone, your servant

If you would like to visit the Prabhupada Sankirtana Society in New York you will find them in the Lower East Side on Avenue B near Forth Street. They have a web site at http://www.prabhupada.cc where you can find more information and pictures.