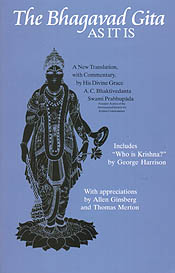 A reprint of the first ever edition of Srila Prabhupada’s Bhagavad Gita As It Is, as published by the Collier Macmillan Company in 1968, is now available. It includes “Who is Krishna” by George Harrison and appreciations by Allen Ginsberg and Thomas Merton.

17 Responses to Bhagavad Gita As It Is 1968 Edition Available