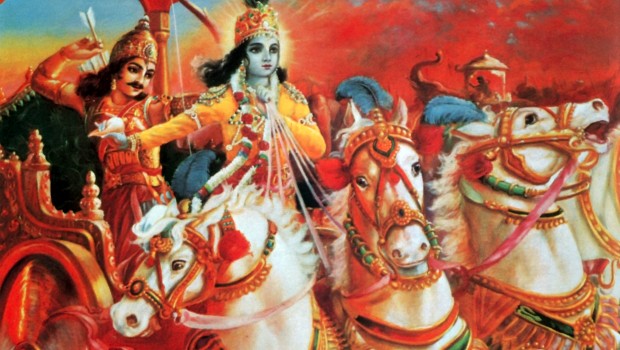 The Bhagavad-gita is the best known and the most frequently translated of Vedic religious texts. Why it should be so appealing to the Western mind is an interesting question.

The Bhagavad-gita is the best known and the most frequently translated of Vedic religious texts. Why it should be so appealing to the Western mind is an interesting question.

It has drama, for its setting is a scene of two great armies, banners flying, drawn up opposite one another on the field, poised for battle.

It has ambiguity, and the fact that Arjuna and his charioteer Krsna are carrying on their dialogue between the two armies suggests the indecision of Arjuna about the basic question: should he enter battle against and kill those who are friends and kinsmen?

It has mystery, as Krsna demonstrates to Arjuna His cosmic form. It has a properly complicated view of the ways of the religious life and treats of the paths of knowledge, works, discipline and faith and their inter-relationships, problems that have bothered adherents of other religions in other times and places. The devotion spoken of is a deliberate means of religious satisfaction, not a mere outpouring of poetic emotion.

Next to the Bhagavata-purana, a long work from South India, the Gita is the text most frequently quoted in the philosophical writings of the Gaudiya Vaisnava school, the school represented by Swami Bhaktivedanta as the latest in a long succession of teachers.

It can be said that this school of Vaisnavism was founded, or revived, by Sri Krsna-Caitanya Mahaprabhu (1486-1533) in Bengal, and that it is currently the strongest single religious force in the eastern part of the Indian subcontinent. The Gaudiya Vaisnava school, for whom Krsna is Himself the Supreme God, and not merely an incarnation of another deity, sees bhakti as an immediate and powerful religious force, consisting of love between man and God.

Its discipline consists of devoting all one’s actions to the Deity, and one listens to the stories of Krsna from the sacred texts, one chants Krsna’s name, washes, bathes, and dresses the murti of Krsna, feeds Him and takes the remains of the food offered to Him, thus absorbing His grace; one does these things and many more, until one has been changed: the devotee has become transformed into one close to Krsna, and sees the Lord face to face.

Swami Bhaktivedanta comments upon the Gita from this point of view, and that is legitimate. More than that, in this translation the Western reader has the unique opportunity of seeing how a Krsna devotee interprets his own texts. It is the Vedic exegetical tradition, justly famous, in action.

This book is then a welcome addition from many points of view. It can serve as a valuable textbook for the college student. It allows us to listen to a skilled interpreter explicating a text which has profound religious meaning. It gives us insights into the original and highly convincing ideas of the Gaudiya Vaisnava school. In providing the Sanskrit in both Devanagari and transliteration, it offers the Sanskrit specialist the opportunity to re-interpret, or debate particular Sanskrit meanings—although I think there will be little disagreement about the quality of the Swami’s Sanskrit scholarship.

And finally, for the nonspecialist, there is readable English and a devotional attitude which cannot help but move the sensitive reader. And there are the paintings, which, incredibly as it may seem to those familiar with contemporary Indian religious art, were done by American devotees.

The scholar, the student of Gaudiya Vaisnavism, and the increasing number of Western readers interested in classical Vedic thought have been done a service by Swami Bhaktivedanta. By bringing us a new and living interpretation of a text already known to many, he has increased our understanding manyfold; and arguments for understanding, in these days of estrangement, need not be made.

4 Responses to Forward To The Bhagavad-gita As It Is