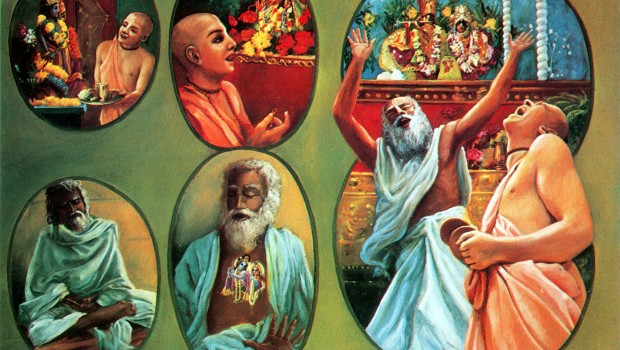 The only objective is to serve Krsna wherever he may be. (Bhagavad-Gita, Chapter 11, Text 55)

The pure devotee does not even want salvation. He does not want to be transferred even to the highest planet, Goloka Vrndavana. His only objective is to serve Krsna wherever he may be.

My dear Arjuna, one who is engaged in My pure devotional service, free from the contaminations of previous activities and from mental speculation, who is friendly to every living entity, certainly comes to Me.

Anyone who wants to approach the supreme of all the Personalities of Godhead, on the Krsnaloka planet in the spiritual sky, and be intimately connected with the Supreme Personality, Krsna, must take this formula, as is stated by the Supreme Himself. Therefore, this verse is considered to be the essence of Bhagavad-gita. The Bhagavad-gita is a book directed to the conditioned souls, who are engaged in the material world with the purpose of lording it over nature and who do not know of the real, spiritual life.

The Bhagavad-gita is meant to show how one can understand his spiritual existence and his eternal relationship with the Supreme Spiritual Personality and to teach one how to go back home, back to Godhead.

Now here is the verse which clearly explains the process by which one can attain success in his spiritual activity: devotional service. As far as work is concerned, one should transfer his energy entirely to Krsna conscious activities. No work should be done by any man except in relationship to Krsna. This is called Krsna-karma. One may be engaged in various activities, but one should not be attached to the result of his work, but the result should be done for Him. For example, one may be engaged in business, but to transform that activity into Krsna consciousness, one has to do business for Krsna. If Krsna is the proprietor of the business, then Krsna should enjoy the profit of the business. If a businessman is in possession of thousands and thousands of dollars, and if he has to offer all this to Krsna, he can do it. This is work for Krsna. Instead of constructing a big building for his sense gratification, he can construct a nice temple for Krsna, and he can install the Deity of Krsna and arrange for the Deity’s service, as is outlined in the authorized books of devotional service. This is all Krsna-karma.

One should not be attached to the result of his work, but the result should be offered to Krsna. One should also accept as prasadam, food, the remnants of offerings to Krsna. If, however, one is not able to construct a temple for Krsna, one can engage himself in cleansing the temple of Krsna; that is also krsna-karma. One can cultivate a garden. Anyone who has land–in India, at least, any poor man has a certain amount of land–can utilize that for Krsna by growing flowers to offer Him. He can sow tulasi plants, because tulasi leaves are very important, and Krsna has recommended this in Bhagavad-gita. Krsna desires that one offer Him either a leaf, or a flower, or a little water–and He is satisfied. This leaf especially refers to the tulasi. So one can sow tulasi leaves and pour water on the plant. Thus, even the poorest man can engage in the service of Krsna.These are some of the examples of how one can engage in working for Krsna.

The word mat-paramah refers to one who considers the association of Krsna in His supreme abode to be the highest perfection of life. Such a person does not wish to be elevated to the higher planets such as the moon or sun or heavenly planets, or even the highest planet of this universe, Brahmaloka. He has no attraction for that. He is only attracted to being transferred to the spiritual sky. And even in the spiritual sky he is not satisfied with merging into the glowing brahmajyoti effulgence, for he wants to enter the highest spiritual planet, namely Krsnaloka, Goloka Vrndavana. He has full knowledge of that planet, and therefore he is not interested in any other. As indicated by the word mad-bhaktah, he fully engages in devotional service, specifically in the nine processes of devotional engagement: hearing, chanting, remembering, worshiping, serving the lotus feet of the Lord, offering prayers, carrying out the orders of the Lord, making friends with Him, and surrendering everything to Him. One can engage in all nine devotional processes, or eight, or seven, or at least in one, and that will surely make one perfect.

The term sanga-varjitah is very significant. One should disassociate himself from persons who are against Krsna. Not only are the atheistic persons against Krsna, but also those who are attracted to fruitive activities and mental speculation. Therefore the pure form of devotional service is described in Bhakti-rasamrta-sindhu as follows: anyabhilasita-sunyam jnana-karmady-anavrtam anukulyena krsnanu silanam bhaktir uttama. In this verse Srila Rupa Gosvami clearly states that if anyone wants to execute unalloyed devotional service, he must be freed from all kinds of material contamination. He must be freed from the association of persons who are addicted to fruitive activities and mental speculation. When, freed from such unwanted association and from the contamination of material desires, one favorably cultivates knowledge of Krsna, that is called pure devotional service.

Anukulyasya sankalpah pratikulyasya varjanam. One should think of Krsna and act for Krsna favorably, not unfavorably. Kamsa was an enemy of Krsna’s. From the very beginning of Krsna’s birth, he planned in so many ways to kill Him, and because he was always unsuccessful, he was always thinking of Krsna. Thus while working, while eating and while sleeping, he was always Krsna conscious in every respect, but that Krsna consciousness was not favorable, and therefore in spite of his always thinking of Krsna twenty-four hours a day, he was considered a demon, and Krsna at last killed him. Of course anyone who is killed by Krsna attains salvation immediately, but that is not the aim of the pure devotee. The pure devotee does not even want salvation. He does not want to be transferred even to the highest planet, Goloka Vrndavana. His only objective is to serve Krsna wherever he may be.

A devotee of Krsna is friendly to everyone. Therefore it is said here that he has no enemy. How is this? A devotee situated in Krsna consciousness knows that only devotional service to Krsna can relieve a person from all the problems of life. He has personal experience of this, and therefore he wants to introduce this system, Krsna consciousness, into human society. There are many examples in history of devotees of the Lord risking their lives for the spreading of God consciousness. The favorite example is Lord Jesus Christ. He was crucified by the nondevotees, but he sacrificed his life for spreading God consciousness. Of course, it would be superficial to understand that he was killed. Similarly, in India also there are many examples, such as Thakura Haridasa. Why such risk? Because they wanted to spread Krsna consciousness, and it is difficult.

A Krsna conscious person knows that if a man is suffering, it is due to his forgetfulness of his eternal relationship with Krsna. Therefore, the highest benefit one can render to human society is relieving one’s neighbor from all material problems. In such a way, a pure devotee is engaged in the service of the Lord. Now, we can imagine how merciful Krsna is to those engaged in His service, risking everything for Him. Therefore it is certain that such persons must reach the supreme planet after leaving the body.

2 Responses to The only objective is to serve Krsna wherever he may be. (Bhagavad-Gita, Chapter 11, Text 55)

Tags: Back to Godhead, Bhagavad Gita, Chapter 11, goal of life