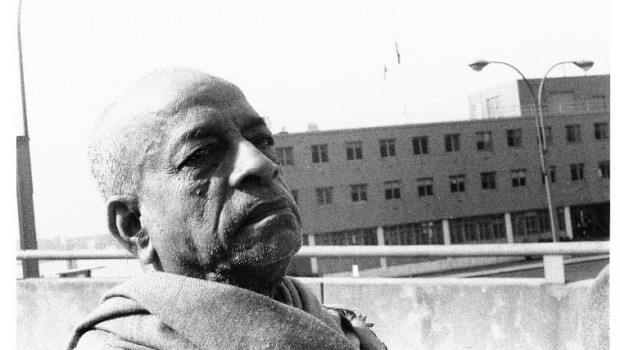 The idea of preaching about God in a missionary spirit is not part of India’s religion. That’s something the Christians introduced into India a few hundred years ago…

India’s greatest gift to civilization is her highly advanced spiritual culture, based on the eternal truths of the Vedic literatures. Sometimes, however, we hear the strange idea that this culture is not meant to be shared with others. I have heard more than one Western professor of Indian religion say, “The idea of preaching about God in a missionary spirit is not part of India’s religion. That’s something the Christians introduced into India a few hundred years ago.” And self-styled yogis sometimes say to me, “People should be left alone to realize God in their own way, in their own time. You can’t go out and preach about inner life.” I have also heard seemingly devout Hindus say, “Why are you teaching of Krsna in America? To follow the Vedas you have to be born in India.” Is Krsna’s message, then, just for a few?

No. Both the Vedic literatures themselves and the living examples of India’s greatest saints disprove that idea. Moreover, such disdain for preaching Vedic truths reveals a sad lack of compassion for fallen humanity.

In fact, the Vedic literatures (the world’s most time-honored scriptures) fully support the idea of preaching the gospel of Krishna consciousness. In the five-thousand-year-old Srimad-Bhagavatam, the self-realized sages who compiled the Vedas at the beginning of creation offer their prayers to Lord Krishna, the Personality of Godhead: “All glories unto You! 0 Lord, You can deliver all suffering conditioned souls from the clutches of maya (illusion). 0 Lord, we fervently pray that You do so. As the personifications of Vedic knowledge, we always try to help the conditioned souls understand You” (Bhag. 10.87.14).

Unless devotees of God broadcast His message, the ignorant living entities can never know that the ultimate purpose of life is liberation from material bondage. Thus, in mad pursuit of sense gratification, they will commit sinful acts and have to suffer the painful reactions, according to the law of karma. They will have to transmigrate from one body to another, repeatedly suffering the miseries of birth, old age, disease, and death. Since surrender to the will of the Lord is the only way to nullify karma and stop the process of transmigration, the merciful devotees of the Lord always preach His glories widely. And the Supreme Lord Himself regularly visits the earth to reclaim the fallen souls. As Lord Krishna states in the Bhagavad-gita (4.8), “In order to deliver the pious and annihilate the miscreants, as well as to establish the principles of religion, I advent Myself millennium after millennium.” And in the Srimad-Bhagavatam we find that the sage Vyasadeva, who compiled the Sanskrit Vedic scriptures, also felt the same compassion for the suffering souls: “The material miseries of the living entity, which are superfluous to him, can be directly mitigated by the linking process of devotional service, but the mass of people do not know this. And therefore the learned Vydsadeva compiled this Vedic literature, which is in relation to the Supreme Truth” (Bhag. 1.7.6). Thus, thousands of years before Christianity appeared in the world, the Vedic literature stated emphatically that souls suffering in darkness should be helped by the torchlight of Krishna consciousness. From the historical perspective, then, the Christians could not have introduced the preaching spirit to India.

Another misconception is that one should cultivate spiritual knowledge only by private meditation and should not “bother” those who are spiritually ignorant. But the great devotee Prahlada Maharaja rejects this view in the Srimad-Bhagavatam (7.9.44): “My dear Lord, I see that there are many saintly persons indeed, but they are interested only in their own deliverance. Not caring for the big cities and towns, they go to the Himalayas or the forest to meditate with vows of silence. They are not interested in delivering others. As for me, however, I do not wish to be liberated alone, leaving aside all these poor fools and rascals. I know that without Krishna consciousness, without taking shelter of Your lotus feet, one cannot be happy. Therefore, I wish to bring them back to the shelter of Your lotus feet.”

Thus, while there undoubtedly is a kind of yogi who neglects others’ welfare, he is hardly of the highest standard. In the Bhagavad-gita Krishna says that the highest yogi is His devotee and that His dearmost devotee is he who takes all risks to approach others and give them the same liberation and bliss he has found in Krishna consciousness.

Finally, we must also take issue with the sectarian notion that Vedic knowledge is meant only for people born in India. This idea finds support neither in any scriptural statement nor in the heart of any intelligent and compassionate person. As the Srimad-Bhagavatam states, “If someone is ignorant and addicted to the path of samsara [birth and death], how can one who is actually learned, merciful, and spiritually advanced engage him in material activity, and thus further entangle him in material existence? If a blind man is walking down the wrong path, how can a gentleman allow him to continue on his way to danger? No wise man can allow this.”

The greatest of lndia’s saints–Ramanuja, Madhva, Bhaktisiddhanta–toured as widely as possible to broadcast Krishna’s message. (Outside India, spiritual teachers like Jesus Christ and Hajrat Muhammad displayed the same preaching spirit). And the most enthusiastic preacher of all was Lord Caitanya, the incarnation of Krishna who appeared in India five hundred years ago to spread Krishna consciousness in the form of the chanting of God’s holy names: Hare Krishna, Hare Krishna, Krishna Krishna, Hare Hare/ Hare Rama, Hare Rama, Rama Rama, Hare Hare. Lord Caitanya taught that chanting the Hare Krishna mantra is the best form of God consciousness for the present fallen age, and He predicted, “The names of God shall be chanted in every town and village in the world.” Thus, Krishna consciousness, the science of God, is universal; it is meant not just for Indians but for every living soul in creation.

His Divine Grace A.C. Bhaktivedanta Swami Prabhupada, founder-acarya of the Krishna consciousness movement, came to America in 1965, impelled by the very same desire that moved Vyasadeva, Prahlada, Madhva, Lord Caitanya, and other great saints of the past. Srila Prabhupada wanted to rescue the unfortunate souls who are blindly trying to enjoy material pleasure in this life, oblivious of the suffering they will inevitably experience in their next life. Despite great personal inconvenience, Srila Prabhupada came here at the advanced age of seventy to fulfill the order of his spiritual master. He introduced the same message that Lord Krishna taught in the Bhagavad-gita and that Lord Caitanya practically demonstrated through his sankirtana (the congregational chanting of the Hare Krishna maha-mantra) movement.

What Srila Prabhupada has taught is the sum and substance of India’s spiritual message, to glorify the name, fame and pastimes of the Supreme Lord, Krishna–and Srila Prabhupada has delivered this message without adulteration. Thousands of young Westerners who had never heard of Krishna, and who certainly had no plans to give up sinful life, have taken up devotional service to Krishna and are now being purified.

So we can see that an essential part of the Vedic teachings is that one should first perfect his own life, and then try to teach others how to perfect their lives. In that way one most quickly attains Krishna’s recognition, and he performs the greatest welfare work for humanity. Teaching people to become devotees of God is far more beneficial than any mundane altruism in the form of food, shelter, hospital care or materialistic education. Why? Because if a person overcomes the disease of his soul, he attains the Supreme Lord’s eternal abode an never has to come back again to this miserable material world.

One Response to Krishna Consciousness and Hinduism: To Preach or Not To Preach?