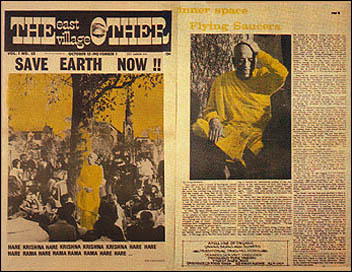 34 years ago the worldwide Hare Krishna movement was inaugurated by Srila Prabhupada under a certain tree in Tompkins Square Park, New York City. There he led a public Kirtan that was to engulf the neighbourhood at the time, and then grow into a movement that was to make ‘Hare Krishna’ a household word.

It was an event that was to also to be captured in the now famous story and picture of Srila Prabhupada in the ‘East Village Other’ newspaper in 1966. Yet in all this time, though this story has become a legend in ISKCON, there has never been any landmark to commemmorate this spot in Tompkins Square Park where the Hare Krishna movement took birth. Though for many years, various devotees have made some attempts to commemorate this spot in some way or another, they have never succeeded. That is until now!! What follows is a story of intense devotion to Srila Prabhupada, and another example of the amazing success and empowerment which can result when we place Srila Prabhupada in the center of our lives as the sole Diksa Guru for ISKCON, just as he wanted.

One year ago the IRM (ISKCON Revival Movement) held its famous meeting in New York City to begin the push to revitalise the movement in the West. One of the devotees who was the organiser and founder of the IRM center in New York, was Mother Vani Dasi, who is dedicated to distributing Srila Prabhupada’s books in New York. For over 3 years she had been performing a personal service to Srila Prabhupda by sweeping the cobblestone bricks around the elm tree in the center of Tompkins Square Park where Srila Prabhupada first started the sankirtan movement in the western world. So many times while sweeping, people would ask her why she was doing this, and it would give her an opportunity to preach Krishna Consciousness and glorify everyone’s spiritual master Srila Prabhupada.

About a year ago, after getting inspired by the IRM meeting in New York that she hosted, she approached Harry Greenberg, the keeper of Tompkins Square Park. She had already developed a nice rapport with him, since in his eyes she was doing”community service” by sweeping around the tree daily. One day she inquired how to go about getting a plaque for the tree glorifying Srila Prabhupada and the Hare Krishna Movement. He told her that she would need to talk to his boss, Margaret Asarro, and he introduced them to each other. Margaret was very friendly and responsive and gave Mother Vani the address of the commissioner of the Park’s Department for the whole of New York City – Commissioner Henry Stern. She advised Mother Vani to write him a proposal and present the idea of getting some type of permanent commemorative marker for the elm tree. She put together an extensive package including an old photo of Srila Prabhupada from the East Village Other article in 1966, and a recent photo of the tree garlanded and decorated with a Hare Krishna maha mantra banner. In all, she wrote a 4 page proposal, giving Srila Prabhupada’s history and how he fulfilled the mission of Lord Caitanya Mahaprabhu by coming to the west and starting and spreading this sankirtan movement. It took a long time to get a response. Everytime she called the commissioner to inquire about the proposal, she would get his secretaries and they would just pass the buck. She spent a whole year of constantly calling every day at least once and persevering.

During that time in early February of this year, while she was helping renovate the whole floor of a building for the opening of the new IRM temple in NYC,(as highlighted in newsletters No. 22 & 23) she received a mysterious call from a reporter who said he wanted to write an article on her trying to acquire a plaque for the tree. She was bewildered as to how he knew this and yet it all seemed like another one of Krishna’s perfect arrangements. He then also interviewed a devotee from the ISKCON temple in Brooklyn, but ended up wanting to do the story on Mother Vani, since she was making the attempt to get the plaque. The reporter wanted to take a photo of Mother Vani and her husband Brahma Bhuta Das under the tree. Arrangements were made and within a couple weeks the article appeared in Time Out New York magazine, which is famous throughout New York City.(Please see next item for full article) As soon as the story came out Mother Vani photocopied it and sent another letter to Commissioner Stern asking – “Now can we get it!”. In reply, she was requested to write to him again with a briefer 1 page version of the proposal on why we wanted the plaque for the tree. The response this time was “Yes”!

However, still no immediate action took place. Within the next three months she again called regularly, inquiring when she would receive a more definite answer as to when we would be getting the plaque. Finally at the beginning of July she called commissioner Stern’s office again determined to make an appointment with him and again the secretary put her on hold. After a long time the secretary came back to the phone saying that our letter had just been reviewed and signed by him and that we would receive it in the mail in a few days. Sure enough the letter came with the final say. We reproduce it below:

Thank you for your letter regarding a historical plaque for A.C. Bhaktivedanta Swami Prabhupada. The articles you enclosed were a pleasure to read.

The elm tree at the southern end of Tompkins Square Park has indeed played witness to an event of great importance. Its historical significance for the Hindu-based Hare Krishna religion is recognized around the globe. With this in mind, a new historical sign telling the story of the park’s trees and horticulture for Tompkins Square Park is currently being written; it will include an account of the Prabhupada connection with the park. Should you have any questions please call Margaret Assaro, our Park Manager.

It was good of you to take the time to write.

What is even more special is that originally we had offered to pay for any wording or sign that would go up. Now not only has the city agreed to honour Srila Prabhupada, but they are going to pay for it too! The text for the historical plaque is being worked on right now and the current draft reads:</>

This is the article referred to earlier that appeared in ‘Time-Out’, one of New York’s most famous magazines:

It may look like any other old tree, but a towering elm standing in an open space at the southern end of Tompkins Square Park is a world-historical site. Under its branches in 1966, A.C. Bhaktivedanta Swami Prabhupada, an Indian religious leader, first introduced his teachings to the Western world. That event marks the founding, right here in New York City,of the Hindu-based Hare Krishna religion. Now the saffron-robed, dance-happy, bookhawking Krishnas want a monument erected near the elm explaining its place in history.

“When Prabhupada came to the West, he knew he had to come to New York,” says Vani devi dasi, 45, the prime mover behind the memorial. “He knew if the religion started here, it would spread through the world. This tree for us is like a Muslim going to Mecca or a Jew going to the Wailing Wall”

Vani has contacted the East Village Parks Conservancy about the idea, and the Conservancy says it’s now considering the proposal before it makes a recommendation to the City Parks and Recreation Department. If Parks gives the Krishnas the thumbs-up, the big question then becomes whether the mayor will attend the monument’s unveiling in a bid to court the crucial ethnic Krishna vote for his upcoming Senate race. Stay tuned….-Stephen Kosloff

A photo with the following caption also appeared with the article:

(Picture caption)
Tree people Vani devi dasi and her husband, Brahmabhuta dasa, hold a photo of Swami Prabhupada in front of the elm tree where he founded the Hare Krishnas.