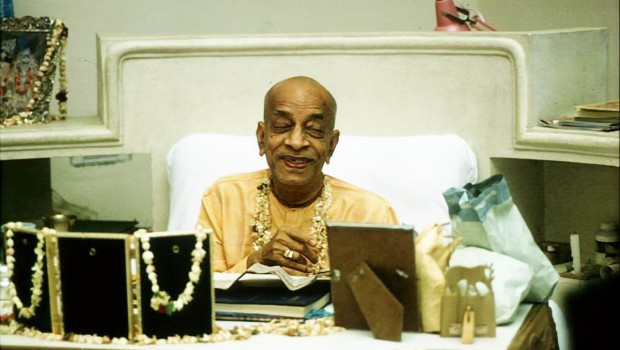 Danavir Goswami has published an excellent article on Chakra which quite conclusively establishes that Srila Prabhupada desires his disciples to become qualified gurus and accept disciples. He gives a number of conclusive quotes from Srila Prabhupada on this point and also states that he and all the other disciples of Srila Prabhupada understood Prabhupada was training them to become future spiritual masters during his physically presence on the planet.

For an honest reader of Srila Prabhupada’s books it is impossible to come to any other conclusion than Srila Prabhupada desired his disciples to become qualified spiritual masters and accept disciples. This point Danavir Maharaja has made very convincingly. And no intelligent person could disagree with him on this point.

“This time I have requested all Nairobi important friends that “Now you take sannyasa and become guru. Krsna Caitanya Mahaprabhu asked everyone to become guru. amara ajnaya guru hana tara ei desa. You have come to Africa. Now become their guru and deliver them.” “Now, how shall I do it?” Yare dekha tare kaha krsna upadesa: “Simply speak. Don’t become very big upstart. Simply speak what Krsna has done. That’s all. You become guru.”(Lecture: December 20, 1975)

However, Srila Prabhupada did not make any provision in the structure of ISKCON for any gurus other than himself and he has stated in his Will that there should be “no change” to any of the management principles of ISKCON. Srila Prabhupada established the GBC as his representatives to manage ISKCON on his behalf as executors of his Will. In his July 9th letter to all GBC’s and Temple Presidents [which was mailed as an attachment to Prabhupada’s Last and Final Will] Prabhupada confirmed the already existing ritvik initiation system would continue “henceforward.”

However, ISKCON rejected Srila Prabhupada’s July 9th order and unauthorizedly appointed 11 men as “Zonal Acaryas.” Prabhupada repeatedly warned his disciples not to make this mistake… But they did it… and the result was disaster. Prabhupada would never have agreed to a system that meant eleven of his disciples forced all their godbrothers to worship them as if they were their disciples. If Prabupada’s disciples refused to worship their eleven “chosen” godbrothers on the same level that they worshipped Prabhupada they were branded as offenders and driven out of ISKCON. Now practically everyone, even the devotees in ISKCON, agree that Srila Prabhupada did not appoint those 11 men as “Acaryas,” however ISKCON still refuse to accept Prabhupada’s July 9th order confirming the ritvik initiation system would continue “henceforward” in ISKCON.

The real situation is Prabhupada established a ritvik initiation system for ISKCON in his physical presence and he intended the ritvik system to continue in ISKCON after his physical disapearance and confirmed that in his July 9th letter. However, simultaneously Srila Prabhupada orders his disciples to go on and become gurus and accept their own disciples. It dies not appear that Prabhupada intended his disciples to initiate in his preaching organization, ISKCON, he made no provision for that. It seems Prabhupada expected his disciples who wanted to make their own disciples would start their own preaching organizations. That is the only practical way.

We have seen in ISKCON it is completely unworkable to have disciples of many different gurus in one temple. You end up with so many factions in the temple and the whole thing is completely unworkable. The disciples all want to serve their guru, but in most cases their primary authority, the Temple President, is not even a disciple of their guru. The temple president may not even like the gurus of the devotees in his temple, in almost all cases he does not accept them as his spiritual authority and often he may not even agree with them at all. So the disciples of gurus in ISKCON are put into a position where they have to serve under someone who is not a representative of their spiritual master. To make matters even worse their spiritual master is not permitted to change their service or give them any instruction conflicting with the desires of the Temple President… It is craziness… An ISKCON devotee takes initiation from a guru and the guru has no authority whatsoever over his disciples. He can not even change their service! Even if he was a pure devotee he could not do anything to help his disciples go back to Godhead as he does not even have any authority over them.

As usual from the ISKCON camp Danavir Maharaja has completely watered-down the qualifications required for a spiritual master. He claims one doesn’t have to be an uttama-adhikari to be a spiritual master, and that is also true to some extent. However, Srila Prabhupada repeatedly asserts that one does have to be very careful to accept a pure devotee, an uttama-adhikari, as his spiritual master. Prabhupada repeats this message throughout all his books and classes and I am sure Danavir Maharaja has not missed this point. He is simply attempting to hide it from us in his paper. “A neophyte Vaisnava or a Vaisnava situated on the intermediate platform can also accept disciples, but such disciples must be on the same platform, and it should be understood that they cannot advance very well toward the ultimate goal of life under his insufficient guidance. THEREFORE A DISCIPLE SHOULD BE CAREFUL TO ACCEPT AN UTTAMA-ADHIKARA AS A SPIRITUAL MASTER. (Nectar Of Instruction 5) Danavir Maharaja has completely concealed the fact that Srila Prabhupada repeatedly instructs that one must accept a pure devotee as his spiritual mater. One could present thousands of quotes on this point, but then the article would be very long…

Another point that Danavir Maharaja does not seem to have realized is that Srila Prabhupada is with us now so vividly and his transcendental sound vibrations are so nicely preserved by modern technology that Srila Prabhupada is living with us now like no other Vaisnava Acarya has ever been able to do in the past. After his apparent disappearance Srila Prabhupada continues to live in his vani, his instructions, in the form of his books and his classes, his morning walks and his letters, his press conferences and his room conversations, his talks with scientists and philosophers, practically everything Srila Prabhupada said and did in his eleven years of preaching in the West is recorded and we all have access to it now thanks to modern technology… Now everyone can sit in and listen to the classes Prabhupada gave in 1966 at 26 2nd Ave. in New York, everyone can go with him on his morning walks with Dr Patel in Bombay, and everyone can sit in on his “private” room conversations with his “leading” devotees. What some have not realized is that Srila Prabhupada’s personal instruction and guidance is now much more available to his devotees today that it ever was to his disciples in his physical presence. Thus Prabhupada has done something revolutionary by using modern technology to completely record his transcendental sound vibrations… This point has not been fully realized by ISKCON. Prabhupada is still living with us very vividly.

Very few of Srila Prabhupada’s disciples ever had much physical association with him as he was always travelling and preaching. He never stayed in one place for very long. And, although ISKCON is so opposed to the idea of a ritvik system of initiation, Prabhupada used the ritvik system to initiate most of his disciples. Most of Prabhupada’s disciples were initiated by either the Temple Prsident or a sannyasi acting as a ritvik priest on Prabhupada’s behalf. Prabhupada did not even know or have any knowledge whatsoever about most of the disciples he initiated. He simply accepted them on the recommendation of his representative, the Temple President. If the temple president thought a devotee was qualified to be initiated Prabhupada would initiate him of her. There was also very little opportunity for personal one-to-one association with Prabhupada. Many of Prabhupada’s disciples never saw his physical form at all, and most of them only saw him a few times when he visited their temple or when they went to India for the Mayapura Festival… Even then, most devotees would only see Prabhupada give the Bhagavatam class and mostly he did not even ask for questions! Also devotees were encouraged not to write to Srila Prabhupada as he was too busy to answer thousands of letters. As it was Prabhupada was answering up to 20 letters daily and they are almost all from the leaders. If the rank-and-file devotees also wrote to Prabhupada on a regular basis he would have had to answer 200+ letters a day, and how could he do that?

Prabhupada, in his physical presence, expanded through his representatives: the Temple Presidents, the GBC and the sannyasis. Even though there were some imperfections in some of his leading disciples, Prabhupada empowered them to train the new devotees and answer their questions and act as siksa-gurus on his behalf.

This system of ritvik initiation from Prabhupada and the GBC’s, Temple Presidents and sannyasis acting as siksa gurus and representatives of Srila Prabhupada for the devotees in general is Prabhupada’s system of management for ISKCON. He ordered in his Will that this system should continue “without change.”

ISKCON have since claimed “Prabhupada is dead” and tried to replace him by so many “living gurus” in Prabhupada’s own preaching organization. Even though Prabhupada ordered over and over again, “NO CHANGE” they have changed everything and therefore the whole organization has turned into a complete disaster. This disaster has been caused by disobeying the orders of Srila Prabhupada, we sing it every morning, yasya aprasadan na gatih kuto ‘pi: “Without the mercy of the Spiritual Master there is no means of advancement from anywhere…”

The only hope for ISKCON is to reestablish the Prabhupada as the guru of ISKCON… But will they ever do it? If they do not the disintegration of ISKOCN will continue.

The most amazing statement Danavir Maharaja makes is: “Therefore the eighty or so initiating gurus within ISKCON, as well as the hundreds of siksa and vartmapradarsaka gurus within ISKCON are all qualified to be spiritual masters…” We know well that even among the “eighty or so” initiating gurus many of them can not even chant 16 rounds of the Hare Krishna mantra daily or even strictly follow the four regulative principles… Yet Danavir Maharaja assures us they are all qualified??? “A neophyte Vaisnava or a Vaisnava situated on the intermediate platform can also accept disciples, but such disciples must be on the same platform, and it should be understood that they cannot advance very well toward the ultimate goal of life under his insufficient guidance. THEREFORE A DISCIPLE SHOULD BE CAREFUL TO ACCEPT AN UTTAMA-ADHIKARA AS A SPIRITUAL MASTER. (Nectar Of Instruction 5)