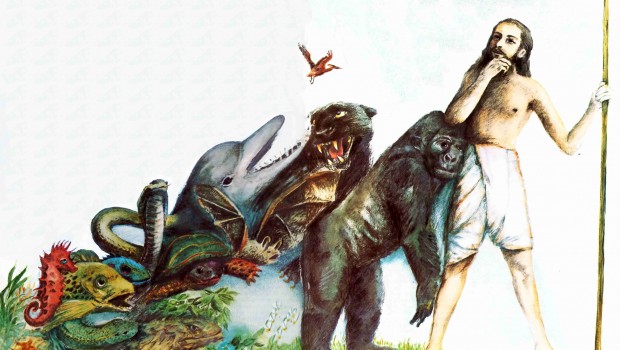 Charles Darwin stood on a very slippery slope when trying to explain how something as biologically and biochemically complex as even the simplest form of life could have spontaneously generated itself from organic molecules and compounds loose in the early Earth’s environment. Because that part of Darwin’s theory has always been glaringly specious, moden Darwinists get hammered about it from all sides, including from the likes of me…

In Charles Darwin’s time, nothing was known about life at the cellular level. Protoplasm was the smallest unit they understood. Yet Darwin’s theory of natural selection stated that all of life–every living entity known then or to be discovered in the future–simply had to function from birth to death by “natural laws” that could be defined and analysed. This would of course include the origin of life. Darwin suggested life might have gradually assembled itself from stray parts lying about in some “warm pond” when the planet had cooled enough to make such an assemblage possible. Later it was realised that nothing would likely have taken shape (gradually or otherwise) in a static environment, so a catalytic element was added: lightning.

Throughout history up to the present moment, scientists have been forced to spend their working lives with the “God” of the Creationists hovering over every move they make, every mistake, every error in judgment, every personal peccadillo. So when faced with something they can’t explain in rational terms, the only alternative option is “God did it”, which for them is unacceptable. So they’re forced by relentless Creationist pressure to come up with answers for absolutely everything that, no matter how absurd, are “natural”. That was their motivation for the theory that a lightning bolt could strike countless random molecules in a warm pond and somehow transform them into the first living creature. The “natural” forces of biology, chemistry and electromagnetism could magically be swirled together–and voilla!… an event suspiciously close to a miracle.

Needless to say, no Darwinist would accept terms like “magic” or “miracle”, which would be tantamount to agreeing with the Creationist argument that “God did it all”. But in their heart-of-hearts, even the most fanatical Darwinists had to suspect the “warm pond” theory was absurd.

And as more and more was learned about the mind-boggling complexity of cellular structure and chemistry, there could be no doubt. The trenchant Fred Hoyle analogy still stands: it was as likely to be true as that a tornado could sweep through a junkyard and correctly assemble a jetliner.

Unfortunately, the “warm pond” had become a counterbalance to “God did it”, so even when Darwinists knew past doubt that it was wrong, they clung to it, outwardly proclaimed it and taught it. In many places in the world, including the USA, it’s still taught.

TOO HOT TO HANDLE

The next jarring bump on the Darwinist road to embattlement came when they learned that in certain places around the globe there existed remnants of what had to be the very first pieces of the Earth’s crust. Those most ancient slabs of rock are called cratons, and the story of their survival for 4.0 billion [4,000,000,000] years is a miracle in itself. But what is most miraculous about them is that they contain fossils of “primitive” bacteria! Yes, bacteria, preserved in 4.0-billion-year-old cratonal rock. If that’s not primitive, what is? However, it presented Darwinists with an embarrassing conundrum.

If Earth began to coalesce out of the solar system’s primordial cloud of dust and gas around 4.5 billion years ago (which by then was a well supported certainty), then at 4.0 billion years ago the proto-planet was still a seething ball of cooling magma. No warm ponds would appear on Earth for at least a billion years or more. So how to reconcile reality with the warm-pond fantasy?

There was no way to reconcile it, so it was ignored by all but the specialists who had to work with it on a daily basis. Every other Darwinist assumed a position as one of the “see no evil, speak no evil, hear no evil” monkeys. To say they “withheld” the new, damaging information is not true; to say it was never emphasised in the popular media for public consumption is true.

That has become the way Darwinists handle any and all challenges to their pet theories: if they can no longer defend one, they don’t talk about it, or they talk about it as little as possible. If forced to talk about it, they invariably try to “kill the messenger” by challenging any critic’s “credentials”. If the critic lacks academic credentials equal to their own, he or she is dismissed as little more than a crackpot. If the critic has equal credentials, he or she is labelled as a “closet Creationist” and dismissed. No career scientist can speak openly and vociferously against Darwinist dogma without paying a heavy price. That is why and how people of normally good conscience can be and have been “kept in line” and kept silent in the face of egregious distortions of truth.

If that system of merciless censure weren’t so solidly in place, then surely the next Darwinist stumble would have made headlines around the world as the final and absolute end to the ridiculous notion that life could possibly have assembled itself “naturally”. They couldn’t even be sure it happened on Earth.

TWO FOR THE PRICE OF ONE

The imposing edifice of Darwinian “origin of life” dogma rested on a piece of incontrovertible bedrock: there could be only one progenitor for all of life. When the fortuitous lightning bolt struck the ideally concocted warm pond, it created only one entity. However, it was no ordinary entity. With it came the multiple ability to take nourishment from its environment, create energy from that nourishment, expel waste created by the use of that energy and (almost as an afterthought) reproduce itself ad infinitum until one of its millions of subsequent generations sits here at this moment reading these words. Nothing miraculous about that; simply incalculable good fortune.

This was Darwinist gospel–preached and believed–until the bacteria fossils were found in the cratons. Their discovery was upsetting, but not a deathblow to the Darwinist theory. They had to concede (among themselves, of course) that the first life-form didn’t assemble itself in a warm pond, but it came together somehow because every ancient fossil it spawned was a single-celled bacteria lacking a cell nucleus (prokaryotes). Prokaryotes preceded the much later single-celled bacteria with a nucleus (eukaryotes), so the post-craton situation stayed well within the Darwinian framework. No matter how the first life-form came into existence, it was a single unit lacking a cell nucleus, which was mandatory because even the simplest nucleus would be much too “irreducibly complex” (a favourite Intelligent Design phrase) to be created by a lightning bolt tearing through a warm pond’s molecular junkyard. So the Darwinists still held half a loaf.

In the mid-1980’s, however, biologist Carl Woese stunned his colleagues with a shattering discovery. There wasn’t just the predicted (and essential) single source for all forms of life; there were two: two types of prokaryotic bacteria as distinct as apples and oranges, dogs and cats, horses and cows… Two distinct forms of life, alive and well on the planet at 4.0 billion years ago. Unmistakable. Irrefutable. Get over it. Deal with it.

But how? How to explain separate forms of life springing into existence in an environment that would make hell seem like a summer resort? With nothing but cooling lava as far as an incipient eye might have seen, how could it be explained in “natural” terms? Indeed, how could it be explained in any terms other than the totally unacceptable? Life, with all its deepening mystery, had to have been seeded onto Earth.