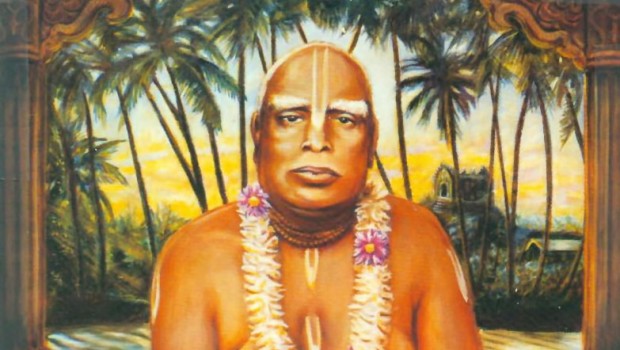 He reasons ill who tells that Vaisnavas die When thou are living still in sound! The Vaisnavas die to live, and living try to spread the holy name around!

We should adore and worship Bhaktivinoda Thakura

The truth is very confidential. If you want to know that truth, you have to follow the great acharyas. Then you will understand.

Therefore Vedic injunction is that in order to understand the transcendental science, you must approach a guru. Guru means this disciplic succession, as I have explained.

So on this day, we should adore and worship Bhaktivinoda Thakura, because in the modern age he reintroduced the disciplic succession.

He was not a sannyasi; he was a householder, living with family, wife, children. Still, he was guru.

Bhaktivinoda Thakura was a very responsible magistrate. And he was so exalted that he would come from his office generally at five o’clock, take his supper and immediately go to bed, say at seven o’clock in the evening, then he wakes up at twelve o’clock to write books.

He left behind about one hundred books.These are very important books. They’re in Bengali and in Sanskrit. And many songs. He has prepared many song books.

We are trying to present Bhaktivinoda Thakura’s books in English translation.

He excavated the birthplace of Lord Caitanya and organized its development in Mayapur. He used to go to preach about Caitanya’s philosophy and used to sell books to foreign countries.

In 1896 he attempted to sell “The Life and Precepts of Caitanya” in the MacGill University in Montreal.

Although Bhaktivinoda Thakura was a householder, a government officer, magistrate, but he was an acharya. From his dealings, from his life, we should learn how one can become a preacher in any stage of life.

So we offer our adoration, our worship to Bhaktivinoda Thakura today because he may bless us to make peacefull progress in Krsna consciousness. Simply by the blessings of the acharyas we can make very rapid progress. We sing every day, “By the mercy of the spiritual master, acharya, we immediately get the blessings of Lord.” Immediately. (Lecture by Srila Prabhupada Sept. 23,1969 London)

He reasons ill who tells that Vaisnavas die
When thou are living still in sound!
The Vaisnavas die to live, and living try
to spread the holy name around!