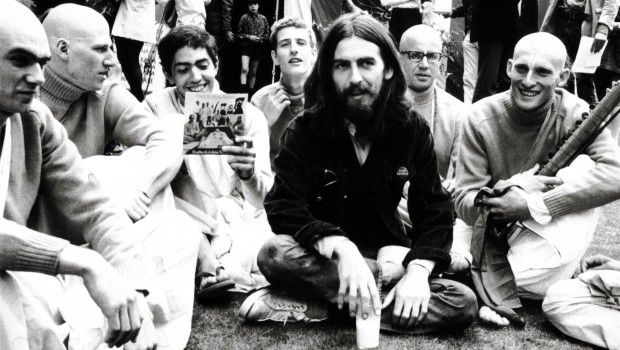 In September 1969 Srila Prabhupada, the founder of the Hare Krishna movement, arrived as a house guest at Tittenhurst Park, John Lennon’s estate in England. 1969 was for John Lennon a year of intense search for social and personal liberation. He had already been to the Maharishi and later would enter primal therapy and left-wing politics. He was in a major transitional period; he had married Yoko Ono in March.

On a cold December night in 1966, an elderly Indian Swami climbed into a Volkswagen van with about fifteen of his followers and their instruments (including a harmonium loaned by Allen Ginsberg) and drove uptown to a recording studio near Times Square. They weren’t professional musicians, but in a few hours they’d recorded an LP that even the producer was excited about. it was a special album, more than just music. it was chanting and meditation; it was worship. A few months later a letter arrived at a small storefront temple on New York’s Lower East Side. Someone had heard the album and told the Beatles about it. They ordered one hundred copies.

George Harrison would later recall in a November 1980 interview the impression Swami Bhaktivedanta’s album, Krishna Consciousness, made on them. “I remember singing it [the Hare Krishna mantra]. just for days, John and I, with ukulele banjos, sailing through the Greek islands–Hare Krishna. Like six hours we sang, because you couldn’t stop once you got going. You just couldn’t stop. It was like as soon as you stop, it was like the lights went out.” 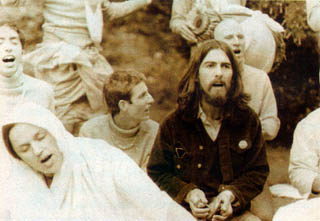 In September 1969, Swami Bhaktivedanta, the founder of the Hare Krishna movement arrived as a house guest at Tittenhurst Park, the beautiful eighty acre British estate owned by John Lennon. Three or four times a week, the Swami, who later became known to the world as Srila Prabhupada, gave public lectures in a tall, stately building at the northern end of the property a hundred yards from the main house, in which John and Yoko lived.

They still call it “the Temple” today, and except for the recent addition of an enormous crimson-and-gold pipe organ nearly covering the towering west wall, it exists unchanged, now surrounded by a recording studio complex owned by Ringo Starr.

Nineteen sixty-nine was for John Lennon a year of intense search for social and personal liberation. He had already been to the Maharishi and later would enter primal therapy and left-wing politics. He was in a major transitional period; he had married Yoko Ono in March, and the Beatles were about to break up.

On September 14, John, Yoko, and George Harrison, after enjoying an Indian vegetarian meal prepared by the devotees at the Temple, walked over to Srila Prabhupada’s quarters for their first meeting. Three months before in Montreal, some of the Hare Krishna devotees had sung with John and Yoko during the recording of “Give Peace a Chance.” And now they were about to meet the guru who brought the Hare Krishna mantra to the West.

Their lively discussion with Srila Prabhupada, which you can hear by listening to the RealAudio clip on this page,, deals with the path to peace and liberation, the eternality of the soul, reincarnation, the nature of God, qualifications of the guru, and the authority of Bhagavad-gita (the Indian spiritual classic still sacred to 600 million people.

In a conversation sometimes lightly humorous, sometimes intense, the reader will be struck by Srila Prabhupada’s prophetic use of President Kennedy’s assassination to dramatize the temporality of human life and how the soul lives on after death, subjects that John would explore in his later songs. Explaining that John should have nothing to fear either in life or death, Srila Prabhupada declares:

John had searched for a guru in India and was anxious to understand how one could recognize a genuine spiritual master,

John: Yes, we should go to a true master. But how are we to tell one from the other?… That’s what we’re doing. We’re going around. Actually, Yoko never met the Maharishi. So, we’re asking for advice about how to know what’s real.

Yoko: We want to ask your advice on that. In other words, what is your answer to this question of authority?… What is the authority, and who has the authority?

11 Responses to The Beatles: George Harrison, John Lennon and Yoko Ono and Krishna