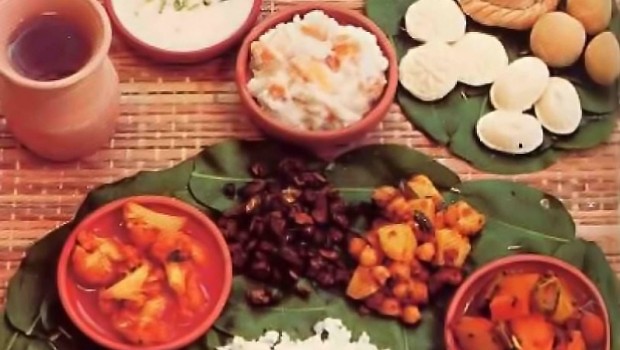 in the Bhagavad-gita 3.13 Lord Krishna says:

The devotees of the Lord are released from all kinds of sins because they eat food which is offered first for sacrifice. Others, who prepare food for personal sense enjoyment, verily eat only sin.

This is a very common reason why aspiring devotees of Lord Krishna fail to become Krishna conscious. They fail because they continue to eat food that is not offered to Krishna. Even though they may become strict vegetarians this does not help them very much, because vegetarian food which is not cooked by a devotee and offered to Krishna with love and devotion is simply sin. So when they eat this vegetarian food that is not prasadam they become sinful. And a sinful person can never become a devotee. Krishna confirms this in Bhagavad-gita 7.28:

Persons who have acted piously in previous lives and in this life, whose sinful actions are completely eradicated and who are freed from the duality of delusion, engage themselves in My service with determination.

Srila Prabhupada states in his purport to this verse: “Those eligible for elevation to the transcendental position are mentioned in this verse. For those who are sinful, atheistic, foolish and deceitful, it is very difficult to transcend the duality of desire and hate. Only those who have passed their lives in practicing the regulative principles of religion, who have acted piously and who have conquered sinful reactions can accept devotional service and gradually rise to the pure knowledge of the Supreme Personality of Godhead. Then, gradually, they can meditate in trance on the Supreme Personality of Godhead. That is the process of being situated on the spiritual platform. This elevation is possible in Krishna consciousness in the association of pure devotees who can deliver one from delusion.”

So we should understand it very clearly that sinful people can not become Krishna conscious and if one eats food, even if it is vegetarian food, that is not Krishna prasadam, meaning not cooked by a devotee of Krishna and offered to Krishna with love and devotion, he is eating only sin and because of eating sin he will become sinful. And because he is sinful he will not be able to become Krishna conscious.

And another common mistake is to try to offer unofferable things to Krishna and then to try and fool ourselves that these things have now become Krishna prasadam because we offered them to Krishna… Krishna only accepts foods in the mode of goodness. That means foods from the four groups of grains, milk products, vegetables and fruits. And He does not accept things in the mode of passion including garlic and onions. And it is a great offense to offer to Krishna foods that have been cooked by non-devotees. So once something is cooked by a non-devotee it can not be offered to Krishna, if you offer it to Krishna that is offensive and will not be good for you and of course it will not be accepted by Krishna and will not become prasadam…

We have to understand exactly what it is that Krishna accepts when we offer Him some food. It is not that Krishna is hungry and needs us to offer Him some food otherwise he will starve… No. Krishna is complete and full in Himself, He has plenty of food, and anyhow the food that we can offer Him is already His. It is not that we have anything to offer to Krishna, whatever we have already belongs to Krishna. So Krishna is not hungry and He does not need to be fed by us. But Krishna has given us a little independence. He has given us a little free will. We can choose to cook some food for our own pleasure or we can choose to cook some food for Krishna’s pleasure. That is our free will. So if we choose to cook for our own pleasure, to suit our own taste, then we are in maya and whatever we cook, even if it is vegetarian and even if we go through the motions of offering it to Krishna will not be accepted by Krishna and will not become prasadam and will be only sin and we will become sinful by eating it. Why? Because we did not cook it for Krishna. We cooked it for ourselves.

This is a very basic and a very fundamental principle of Krishna consciousness. And it is a point that 99% or more of today’s ‘devotees’ do not understand or follow. A devotee does not do anything for himself. He does everything for Krishna. So when a devotee goes to the market to purchase things he is not purchasing things because he thinks, “that looks nice, I will enjoy eating that…” That thought and consciousness of being the enjoyer is maya, illusion, sinful. We are not the enjoyer, Krishna is the enjoyer, we are meant to be enjoyed by Krishna. We are meant to be servants of Krishna. So when a devotee goes to the market and sees something very nice he is thinking of how he can prepare this nice thing in a very good way and offer it to Krishna and he is thinking of how Krishna will enjoy it.

It is amazing that so many devotees have forgotten or never understood these essential basic fundamental principles of cooking for Krishna. Without very sincerely following these basic principles no one can become Krishna conscious. It is impossible to eat sin without becoming sinful and it is impossible to become Krishna conscious if we are sinful.

So if anyone wants to become a devotee of Krishna he must make this very serious vow that he will only eat Krishna prasadam, foods cooked by devotees and offered with love and devotion to Krishna. We can not eat anything that is not real Krishna prasadam and expect that we will be able to become devotees of Krishna.

Of course we have to learn how to cook for Krishna. The standards for cooking for Krishna are quite high. One has to be exceptionally clean. One has to have taken a bath before he cooks for Krishna and has to be wearing clean clothes. And the kitchen has to be very clean. There is an English saying: “Cleanliness is next to Godliness” and that is very true. We can not offer something to Krishna that was prepared in a dirty kitchen. And there are some important principles and one of these is we have to keep separate “Krishna’s pots” and our own personal eating plates and spoons and cups, etc. We can not use anything in preparing food for Krishna except Krishna’s things. So that means we can not use Krishna’s cooking things for ourselves. So if we are using a pot to cook for Krishna in we can not eat out of that pot ourselves for example. If we are using a spoon for mixing Krishna’s food in the cooking pot we can not later use that same spoon to eat from ourselves. We have to keep Krishna’s things and our eating things separate.

When we have finished cooking for Krishna we have to arrange the food nicely on a plate that we will offer to Krishna. And that plate has to be Krishna’s plate and it can not be used for any other purpose except for offering food to Krishna. And if we have made some drink we can put that in a glass or we can offer a glass of water with Krishna’s meal.

So we will place the plate with the food and the glass of water in front of a photo of Srila Prabhupada and offer it to him.

You can offer to Krishna by chanting Srila Prabhupada’s two pranam mantras then the Panca-tattva Maha Mantra, then the Hare Krishna maha mantra all three times each. It is essential to always chant Srila Prabhupada’s pranam mantras first because it is only through the mercy of Srila Prabhupada that we have any access to Krishna, then it is also essential to always chant the Panca-Tattva maha mantra before chanting the Hare Krishna maha mantra because it is only by the mercy of Lord Caitanya that we have any access to Krishna. There are also two other mantras that we chant when offering prasadam. So it is five mantras in total and we chant each mantra three times. It only takes a few minutes so we should take the time to chant these mantras.

So they are the five mantras and we should chant them all three times each. Then if one is brahman initiated he chants the first gayatri mantra ten times on his brahmin thread.

The process in the temple or at home with your home alter is that after the Lord is offered food we then offer aroti and kirtan. So after offering there should be aroti and kirtan, then the devotees can honor the Krishna prasadam.

Before honoring the prasadam there is a very short prayer that devotees chant from Srila Bhaktivinoda Thakura’s Gitavali:

“O brothers! This material body is a place of ignorance, and the senses are a network of paths to death. The senses throw the soul into this ocean of material sense enjoyment and, of all the senses, the tongue is most voracious and uncontrollable; it is very difficult to conquer the tongue in this world. O brothers! Lord Krsna is very kind to us and has given us such nice prasada, just to control the tongue. Now let us take this prasada to our full satisfaction and glorify Their Lordships, Sri Sri Radha and Krsna and, in love, call for the help of Lord Caitanya and Prabhu Nityananda.”

It is very good if we can chant this prayer, both the Bengali and English, before honoring Krishna Prasadam. It only takes a couple of minutes and it helps us to remember how merciful Krishna is to us that He has given us this Krishna Prasadam that enables us to control our tongues.

The tongue is the most difficult to control of all the senses. The tongue has two functions: tasting and vibrating. So we can conquer the tongue if we only let it taste Krishna prasadam and only let it vibrate Krishna-katha, talks about Krishna. We should never let the tongue taste anything except Krishna prasadam and never let it vibrate anything except Krishna katha. If we undergo this simple austerity then advancement in Krishna consciousness will be very simple and very rapid for us.

185 Responses to How to offer food to Krishna? 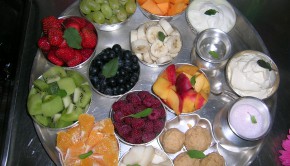 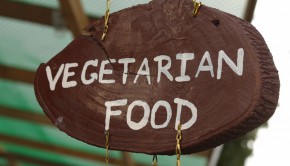