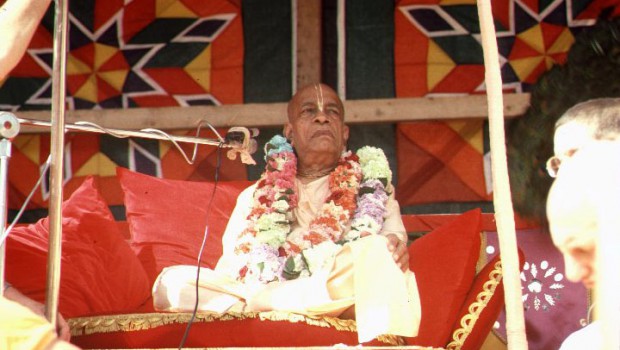 All glories to Sankirtana, Prasadam and Srimad-Bhagavatam

I think this policy of Sankirtana, Prasadam and Srimad-Bhagavatam has been successful in all the centers. Please therefore follow this transcendental policy with heart and soul and make your center as spiritually opulent as far as possible.

Please accept my blessings. Your letter dated December 21 along with the picture of the new house was duly received by me while I was in Boston and we enjoyed the few days of meeting together in that Temple. It was a great transcendental pleasure to meet you all. Your statement in the letter, “All glories to Sankirtana, Prasadam and Srimad-Bhagavatam” is very welcome. Before coming to your country, when I was in India and I was planning to come here, I was thinking in the same way. I was thinking that my preaching work in this country would be a difficult job for me on account of the country’s position being completely different from the principles of Bhakti cult. At that time I was also thinking of chanting and dancing in Sankirtana as well as distributing prasadam in the matter of my preaching Bhagavatam. So this planning has by the grace of my Guru Maharaja and Krishna become successful in the practical field. Forty years before when two of my eldest God-brothers came to London with this mission they simply devoted their time in lecturing in some renowned public place and inviting some leading politician to preside over the meeting. You know very well that when I began my preaching work in New York I never followed this policy of lecturing amongst the stereotyped politicians or elites of the society. And if I would have followed such a policy, I think I would also have gone back to India without any success. I think this policy of Sankirtana, Prasadam and Srimad-Bhagavatam has been successful in all the centers. Please therefore follow this transcendental policy with heart and soul and make your center as spiritually opulent as far as possible.

4 Responses to All glories to Sankirtana, Prasadam and Srimad-Bhagavatam