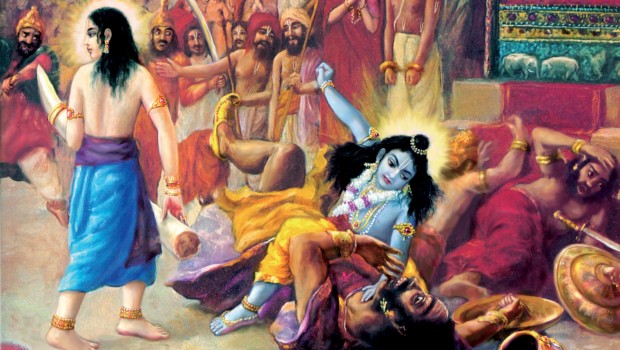 “All of them–As they surrender unto Me–I reward accordingly. Everyone follows My path in all respects, O son of Prtha [Arjuna].” (Bhagavad-gita 4.11)

Krishna is responding to everyone, devotee or non-devotee. He is revealing Himself or not revealing Himself according to the desire of the individual person. In another place in the Gita Krishna says: “I am within everyone’s heart and I am giving remembrance, knowledge and forgetfulness.” So one may ask why would Krishna give anyone the ability to forget Him? He states here clearly that He gives remembrance and knowledge — but He also gives forgetfulness. Krishna helps the devotees by giving them rememberance and knowledge so they can worship and serve Him–because that is what the devotees want, they want to remember Krishna, so Krishna helps them. But the demons do not want to remember Krishna. They want to become the supreme lord themselves, they want others to serve them, they want to be the master–they do not want to surrender to Krishna, they do not want to even know that there is a Supreme Personality of Godhead above them. So it is Krishna’s mercy to the demons that from within their hearts He gives them the ability to forget Him.

In reality everyone is searching for Krishna in the different aspects of His manifestations. Krishna is the Supreme Personality of Godhead and is fully realized by His pure devotees but everyone is realizing different aspects of Krishna according to their desires and their surrender to Krishna. The jnanis or the philosophers partially realize Krishna in the form of His impersonal brahmajyoti effulgence that is spread everywhere in an all-pervasive way, the yogis or meditators realize the paramatma or supersoul feature of Krishna within their hearts. In this way Krishna is the object of everyone’s realization and He reveals Himself according to one’s desire to have Him.

In the transcendental world also Krishna reciprocates with His pure devotees just as the devotee wants Him. One devotee may want Krishna as his supreme master, another as his personal friend, another as his son and still another as his lover. Krishna responds to all the devotees equally, according to their different intensities of love for Him. In the material world also the same reciprocations of feelings are there, and they are equally exchanged by the Lord with the different types of worshipers.

The pure devotees both here in the material world and in the spiritual world associate with Krishna in person and are able to render personal service to Him and in this way they derive transcendental bliss from His loving service. Also Krishna helps the impersonalists who desire to commit spiritual suicide by annihilating the individual existence of the living entity — Krishna helps them by absorbing them into His effulgence. Because the impersonalists do not agree to accept the eternal, blissful Personality of Godhead they can not enjoy the bliss of personal service to the Lord, having extinguished their individuality. So Krishna is rewarding the impersonalists in the way they want to be rewarded, by absorbing them into His impersonal effulgence and He is rewarding the devotees also by manifesting Himself before them in the way they want to see Him.

Krishna directly states that for the non-devotees — because they do not want to see Him — He does not manifest Himself before them:

“I am never manifest to the foolish and unintelligent. For them I am covered by My eternal creative potency [yoga-maya]; and so the deluded world knows Me not, who am unborn and infallible.” (Bg. 7.25)

This whole material world is created by Krishna for us, the rebellious living entities who want to try to enjoy separately from Him. In reality there is no enjoyment separate from Krishna because He is the Supreme Personality of Godhead the sole enjoyer and we are His servants. We are constitutionally servants. We have no alternative, we must render service. The devotees enjoyment comes from seeing Krishna happy. So when Krishna is happy because of his service the devotee enjoys.

The materialists, also, can not avoid this service. Even if you look at the greatest and most powerful men on the planet — they all have to render service. If you take the President of the United States — a very big post — still he has to serve the country. He is elected because he promises to serve the country and if he does not serve the people will demand that he be removed from the post of president.

Every one of us is serving. Some are serving their family and to get money they have to serve the boss and serve the customers. Even if one is alone he is still serving his senses.  In every field of life this service is the most prominent thing for everyone. Many have heard the term ‘sanatana-dharma‘ but very few realize what this is. Sanatana means ‘eternal’ and dharma means ‘occupation’ so sanatana dharma means the eternal occupation of the living entity. People tend to think that this sanatana-dharma is religion but that is not a very good understanding of the word because religion can change. One day I can be a Christian then I can change to be a Hindu so this ‘Christian’ or ‘Hindu’ can not be sanatana-dhrama because it can not be changed.

The dharma of an object is that thing which can not be separated from the object. The thing that can not be changed, the eternal characteristic of that object. For example if we speak of sugar it must be sweet. Sweetness is the dharma of sugar. If it is not sweet it is not sugar. The dharma of water is to be wet, the dharma of salt is to be salty… So what is our dharma? What is the characteristic that we have that can not be changed and without it we have no meaning? Actually that characteristic is service. We have no meaning without service. There is no way we can escape from service. Even to simply maintain the body we have to work, we have to render service. So our dharma is service and there are so many different types of service that we can be occupied with. But what is sanatana-dharma, our eternal occupation? That is service to Krishna, the Supreme Personality of Godhead so that is our eternal occupation, serving Krishna, and really there is nothing else but service to Krishna.

However Krishna has given us all a limited amount of independence. Our relationship with Krishna is based on love and love can not be forced. So if we are to love Krishna in a voluntary way then there has to be some other option for the rebellious living entities who decide not to love Krishna. That is this material world and because Krishna reciprocates with all the living entities in the way they want to see Him then it is His great mercy for the demons who have rebelled against Him the He creates this material world as a place where the demons can forget Krishna and try to be happy separately from serving Krishna. Actually there is no question of us ever being separate from Krishna but to create this illusion for the demons who want it Krishna has created maha-maya. It is only by the power of maya that the demons are bewildered into thinking that they can be happy separately from Krishna, it is only by the spell of maya that they think they can turn this material world into a happy place where they can live forever.

So the summary is Krishna reveals Himself to the living entities in the way they want to see Him. So for a devotee Krishna appears as Krishna in a relationship like son, friend of lover and for the demon Krishna appears as maya and by the illusions generated by maya the demon can believe that Krishna does not exist.

276 Responses to Krishna Responds to Everyone According to their Desires