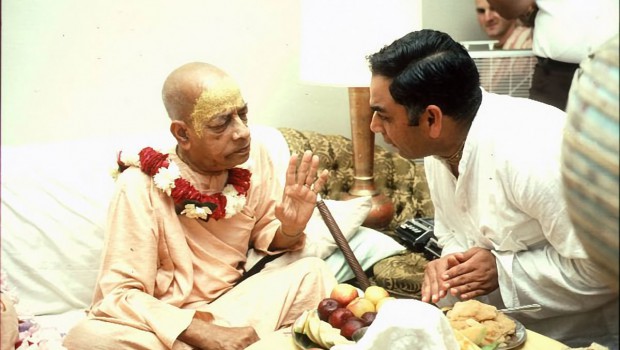 If ISKCON accepts the ritvik initiation system as instituted by His Divine Grace all those who have taken on the role as giving diksa will declare that they should of done it on behalf of His Divine Grace. They may be accepted as ritvik representatives of the Acharya, Srila Prabhupada. If they don’t like this system they may do as they desire in their own temples. Srila Prabhupada said in front

Thank you for your interest in Srila Prabhupada’s mission. Enlightening the innocent devotees to the Truth is the greatest service we can do. Trying to enlighten the GBC has ben a waste of time so far. It’s harder to wake someone up who is pretending to be sleeping.

You have asked me a few questions and I will answer them as far as possible.

First of all though the quote about Tirtha Maharaja did not come through me. I’ve heard it recently but cannot trace it out. Also the quote about Sridhar Maharaja appointing ritviks in the end was researched by Rupa Vilasa Prabhu and stated in the opening statements in the GBC/Ritvik debate of 1990, San Diego.

I’m glad you read my website [http://members.aol.com/gauridas/]. I am working on a book with all of this information in it for the benefit of the devotees. As far as you wanting to attend the festival there is supposed to be another one this year so hopefully you will be able to attend the next one. I plan to be there and will bew glad to get your association.

As the questions I would say that Srila Prabhupada set up the initiation system so that he would continue to be the guru for ISKCON and any devotees that accept him as their guru even not in ISKCON. He will continue to be the guru for the fortunate souls who accept him as such. For those who want to be diksa gurus; they may do so if they are qualified in their own temples. The advanced devotees will be more interested in helping Srila Prabhupada’s mission than their own self agrandizement, therefore they will continue to support Srila Prabhupada as the guru and not themselves. They will help others take shelter of His Divine Grace as did H.H. Jayananda Prabhu and Visnujana Swami even thought they were so advanced and inspired so many devotees while they were on the planet. There will be no other Diksa gurus for ISKCON. Those posing as such today will be forgotten in the near future unlike Srila Prabhupada.

Yes there were more recordings of Srila Prabhuapda talking about this issue but the tapes mysteriously disappeared between TKG and Ramesvara. I personally heard Srila Prabhupada say not to put Vyasasanas in the temples for the ritviks because they are not worshipable like His Divine Grace is. You cannot be a guru in your own gurus temples. That’s why Srila Prabhupada left the Gaudiya Math and did not fight for guruship like so many others against Bhaktisidhanta’s orders for a GBC, not new guru, managed mission

To date the GBC have not responded to my pleas to address them about this matter although they claimed in officail resoluions that they have interviewed all witnesses. I have offered my services every year since 1977 and still my requests fall on deaf ears.

If ISKCON accepts the ritvik initiation system as instituted by His Divine Grace all those who have taken on the role as giving diksa will declare that they should of done it on behalf of His Divine Grace. They may be accepted as ritvik representatives of the Acharya, Srila Prabhupada. If they don’t like this system they may do as they desire in their own temples. Srila Prabhupada said in front of TKG and myself in his garden in Vrindavan that the GBC can appoint and remove ritvik initiators.

Srila Prabhupada is present in his books and pictures and murtis so all of the devotees can get the mercy. Devotees used to ask Srila Prabhupada for his mercy and he would reply that his mercy is there for all of us; that we just have to take it! So please take advantage of the mercy and help others also. Then you will please Krsna and earn your ticket back home, back to Godhead!

Hoping this meets you well and advancing in Krsna Consciousness.