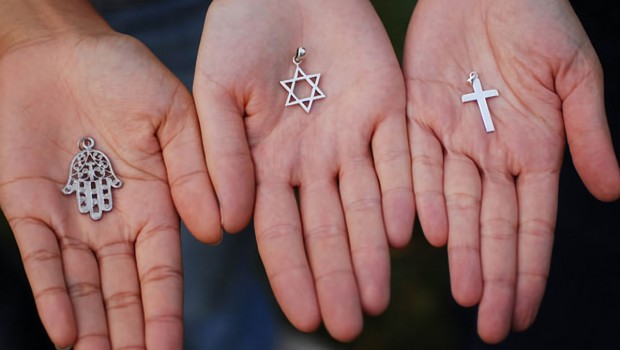 Thank You so much for helping me! This is an interview for a school project, just so you know. I am researching changes in religion throughout history.

Shifa Ali:What are your thoughts on the modernization of traditional religion (not any specific one, but you can talk about specifically Christianity or Islam or Hinduism, etc.) in order to better fit today’s society, meaning, do you think it is right/okay/permissible/encouraged to change the rules or foundations or practices of a religion so that more people follow it, to make it easier?
Madhudvisa dasa: Religion can not be “modernized.” The meaning of religion is to follow the laws given by God. The goal of religion is to develop love for God. So God is one and the laws of God are one. They do not change over time.
You have mentioned different religions [Christianity, Islam, Hinduism, etc.] Outwardly these appear to be different religions but if one studies the matter closely all of these religions aim at developing love for God. Krishna explains this in the Bhagavad-gita. He says whenever there is a discrepancy in the following of religious principles He descends [or sends his prophet, son, etc.] to reestablish the principles of religion. So Krishna [God] and His representatives appear in every society and establish religious principles. They explain the same laws of God in the local language and establish the practices of the religious system in a way the people they are preaching to can actually follow.
For example Lord Jesus Christ said to his followers: “There are so many things I have not told you for at the moment you could not bear them.” So Jesus gave the people he was speaking to knowledge to the point they could understand it.
So although religion is one, it is revealed to different people in different cultures according to their ability to understand and practice.
However religion means to develop love of God so the test of any religion is to see how far the followers of that religion have become lovers of God and how they have developed the godly qualities. There is no meaning to religion if the followers are not developing love for God and are not giving up their demonic ways and developing godly qualities.
To develop love for God in the material world is not such an easy thing. The material world is a place where we can either work to satisfy our own senses or we can work to satisfy God’ senses. We can not become religious or develop godly qualities if we are working selfishly to satisfy our own senses. So this sense gratification mentality has to be give up. So every religion makes some demands on the followers to live in a certain way, to follow certain moral principles, to give up sinful activities, etc. Every religion has rules and regulations the followers must accept to be true followers of that religion.
For example, as devotees of Krishna, we have four rules: no illicit sex life [sex is only for having children in marriage], no meat eating, no gambling and no intoxication. We are also required to chant more than 27,000 names of Krishna daily [16 rounds of the Hare Krishna maha mantra] These principles have been established since the beginning of time. The specific number of rounds [16] was set by our spiritual master, His Divine Grace, A.C. Bhaktivedanta Swami Prabhupada, the Founder-Acharya of the Hare Krishna Movement. He adjusted this figure from the 64 rounds recommended by his spiritual master in India to 16 rounds for his Western disciples.
This adjustment of the details is sometimes required according to time and place. What is possible for students living in a temple in the peaceful atmosphere of a holy place in India may not be possible for devotees living in the middle of New York City with a full program of preaching activities.
Such adjustments can only be made by God Himself or a maha-bhagavata, a pure devotee, who has the ability to adjust things according to place, time and circumstances.
However religious principles can not be adjusted to attract more followers. What we generally see today is religious leaders “water-down” their principles to attract more followers. But what they do is they allow their followers to continue living a demoniac life while giving the comfort they are “religious.”
A real religious person lives, acts and thinks differently from a materialistic person. He lives for God, acts for God and thinks about God. And he develops a different character. It is not that he can be doing all sorts of sinful things and still be “religious.” So we see religions that allow sex outside marriage, do not restrict the use of alcohol, drugs and other intoxicants, allow gambling, and so many other sinful activities. Such “religions” are not religions at all. They are societies of demoniac people who actually have no interest in actually following the laws of God at all or living a godly life or developing a godly character.
Shifa Ali: Is it even still the same religion?
Madhudvisa dasa: It is not even religion! [Following the laws given by God–they are rejecting the laws given by God and still claiming to be religous]
Shifa Ali: Do you feel that this is a common practice today?
Madhudvisa dasa: Yes, Very common unfortunately. Today it is VERY difficult to find a religious person anywhere.
Shifa Ali: Does it effect the spirituality of the person in the end?
Madhudvisa dasa: Yes. These cheaters are posing as religious men and in the garb of preachers are advising their followers they can continue and perform all sorts of sinful activities and still they assure their followers of going to heaven. These men are the greatest demons and will go to the worst type of Hell imaginable and their followers will not experience any spirituality at all and will also end up in Hell because they selected the wrong leader…
Shifa Ali: Does it matter at all as long as the person is still following the religion they believe is right?

Madhudvisa dasa: It is not faith that is the consideration. So many people have absolute faith and truly believe in the person or religion they are following. But many of them have placed their faith in cheating leaders and cheating religions. They have put their faith in the wrong place. So the result is they will go to Hell not to God… One has to have faith in a pure devotee, one who is actually able to deliver the real message of God and who can help one reestablish his lost relationship with Krishna, God.
Chant Hare Krishna and be happy!
Madhudvisa dasa