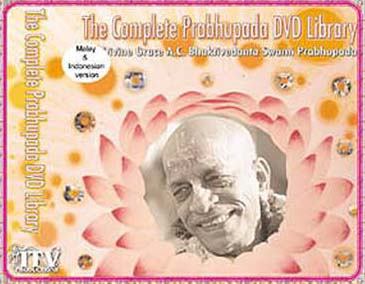 All film and video footage of Srila Prabhupada ever taken is now available on a set of 23 DVD’s with subtitles in 19 languages!!!!

All film and video footage of Srila Prabhupada ever taken is now available on a set of 23 DVD’s with subtitles in 19 languages!!!! To purchase the new international Prabhupada DVD set please CLICK HERE

19 languages is just the beginning. You can add your language. All you have to do is go to the “subtitles” web page www.itvproductions.net/subtitles and locate your language. You will see what has been and has not been translated. If your language is not there, email ITV: itv@charter.net and we’ll make sure it gets a column. Don’t delay. The last replication of 2000 sets is already half gone. We need a lot of preparation time to insert the subtitles. If you don’t get busy now, you wills miss the boat again when we go to replicate version 3. There is no greater gift to give your fellow countrypersons than to offer Srila Prabhupada “live” with their
language. 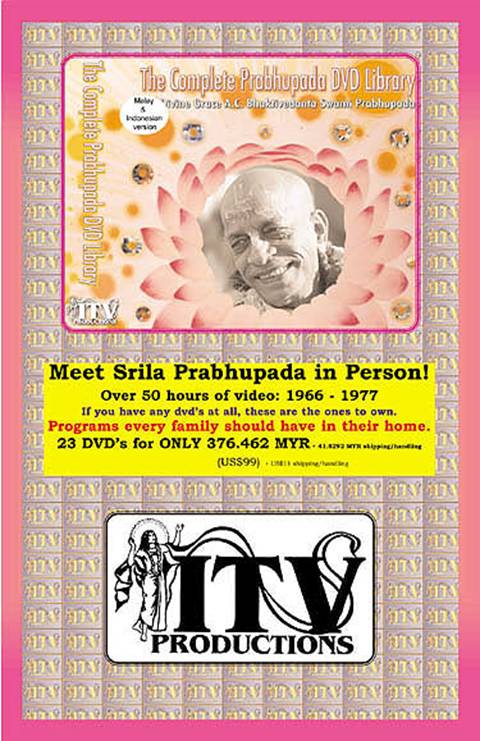 There are a number of new shows from the early days including “Hare Krishna–A Georgio Film” which shows Srila Prabhupada preaching on “hippie hill” in San Francisco in 1967. There is “Viasnavas” showing Prabhupada and his followers preachng in various locations in New York City in 1966 including Tompkins Square Park.

There is also an amazing play featuring Srila Prabhupada and his disciples with Lord Caitanya’s pastimes as its subject. It was shot in Brooklyn botanical gardens in 1966 and is really wonderful.

There is so much new nectar and all the other Prabhupada programs are included also.

Documentaries like “Your Ever-Well Wisher,” (a biography of Srila Prabhupada) the “Acharya Series,” “Prabhupada on Tour” and “The Final Lesson.”

Also included is “Science of God,” and all the Bhagavad-gita and Srimad-Bhagavatam classes available on video along with a chronological collection of all the film recordings of Srila Prabhupada from 1966 to 1977.

All this and much more. More than 40 hours of video.

Nirantara Live at the Pyramid House 1988 →

What Movies Have Devotees Appeared in Since 1990? →