All film and video footage of Srila Prabhupada ever taken is now available on a set of 23 DVD's with subtitles in 19 languages!!!! 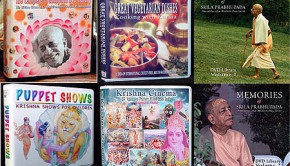