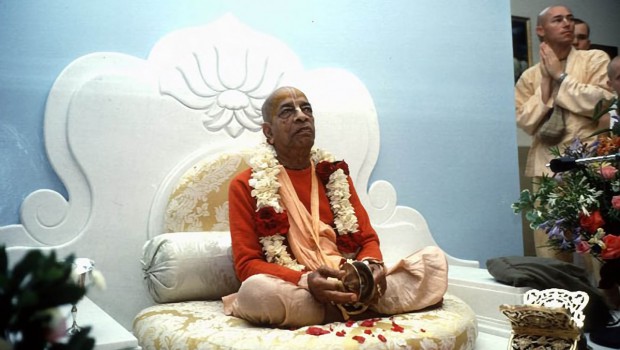 When Srila Prabhupada traveled to  Washington DC in the summer of 1976 I wanted desperately to do what ever little direct personal service for him that I could. So I eagerly looked for any opportunity an insignificant disciple such as my lowly self could find. Considering all of my Godbrothers and Godsisters out ranked me on every level, I would have to be a little aggressive if I were to render any direct service at all. Of course all of us were already assisting and serving Srila Prabhupada and his mission of spreading the Hare Krsna movement all over the world. Still, by some extra ordinary amount of good fortune, special mercy was coming our way. Srila Prabhupada was going to reside among us for one week and the potential for personal contact would be available like never before. Especially for the majority of us who never had been given the opportunity to serve directly along side of Srila Prabhupada. This would be a special time and a rare chance to gather up the nectar of his personal presence. As it turned out, this was the first and only time Srila Prabhupada came to Washington DC, thus making the memories of these days even that much sweeter.

Opportunities for service were a plenty and I did my best to grab as many as I could get away with, without stepping on too many toes. Here’s one that may seem so insignificant that it is not even worthy of mention. Yet what transpired in that one moment is still being felt to this day.I would hold open every door I could for Srila Prabhupada.Certainly no one would object if I simply held open doors for Srila Prabhipada. Nor would anyone care to usurp this lowly position. I found a service that would bring me very close to Srila Prabhupada, if even only for a few moments. I took it upon myself, and decided I would become the official door man for Srila Prabhupada during his stay.

Each day of his week long visit, I would run a little ahead of the chanting party accompanying Srila Prabhupada and hold open the door for him as he returned to his personal quarters. On the very first day of my self appointed service, I held the door as Srila Prabhupada slowly made his way up the few steps to reach the top of the entrance way landing.  Srila Prabhupada was standing on this rather small landing which now brought him only inches away. Here it was just me and Srila Prabhupada standing together, side by side. We were both so close that we were practically touching.In all the excitement of being so extremely close to His Divine Grace, I spontaneously said “HARI BOL SRILA PRABHUPADA” in an accidental and somewhat load voice. Miraculously, I now had his full attention. Srila Prabhupada stopped in his tracks, turned his head slightly and looked me directly in the eyes. Just then, time appeared to freeze and this brief moment’s encounter now seemed to be lasting an entire lifetime. What happened next entirely caught me off guard. To my delight and utter surprise, Srila Prabhupada responded to my “Hari Bol Srila Prabhupada” with the most incredible “Hare Krsna”.  I remember, Srila Prabhupada’s “Hare Krsna” was exceedingly heavy, and perhaps a bit stern, but he did not appear to be bothered in any way.

Authoritative might be a good way to describe it. The Holy Name was deliberately directed just for me. Srila Prabhupada’s pronunciation was grave and more than usually drawn out in such a way so that every single syllable was clear and perfectly pronounced. His chanting of Hare Krsna had so much intense purity that all the other background sounds from the ensuing kirtan, kartals, mirdungas and the devotees seemed to fade away. All I now heard was Srila Prabhupada’s “Hare Krsna” with no other distractions what so ever. Again, this moment appeared to be lasting forever!

As Srila Prabhupada passed and entered his house, I now began to delight in our exchange. I caught his attention and even got a response back. I had received exactly what I was looking for, that personal association. On another level however, I started to realize what had just taken place. Srila Prabhupada very humbly and submissively summited to my request. Out of habit we regularly welcome one another with Hari Bol Prabhu and out of habit reply back with another Hari Bol. Yet when I said Hari Bol to Srila Prabhupada, he replied by saying Hare Krsna back. Unknowingly, I had just asked Srila Prabhupada to chant Hare Krsna with my Hari Bol Srila Prabhupada. Deliberately and consciously he obliged when he replied Hare Krsna !   I had mixed emotions. I was feeling ecstatic from the contact and communication but should I have been so what’s the word, assertive, aggressive, and loud mouthed?   Still I loved it. Srila Prabhupada showed such kindness to me. He wasn’t disturbed or bothered. I asked him to do something, to chant Hare Krsna and he obliged. Srila Prabhupada was beyond false ego and exhibited pure love and pure humility and pure compassion for this fallen soul. I loved how absolutely personal and wonderful Srila Prabhupada’s response to my excited “Hari Bol Srila Prabhupada” was. He stopped, looked, and listened to my little plea and then gave the most absolutely perfect response, “Hare Krsna”. On the first day of Srila Prabhupada’s stay, I thought what a wonderful week this was going to be.

4 Responses to Opening the door for Srila Prabhupada