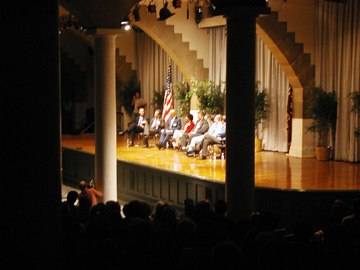 On Monday, September 24th, a town meeting took place at the Great Hall at Cooper Union in New York City. There were nearly 1,000 attendees who came to hear from mayoral candidates, economists, journalists, theologians, psychologists and foreign policy experts. The Prabhupadanugas were contacted the night before and were asked to provide prasadam for all of these people.

Srila Prabhupada’s books were displayed and a copy of the Peace Formula was given to everyone who received prasadam and thensome. 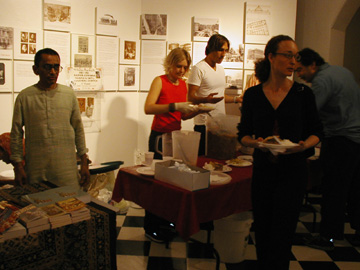 I cannot remember seeing people get so excited about prasadam. They were all asking about the recipes for the subji and halava and were curious why they had not seen devotees in so many years. Some of them had visited Hare Krishna temples as long as twenty-five years ago. 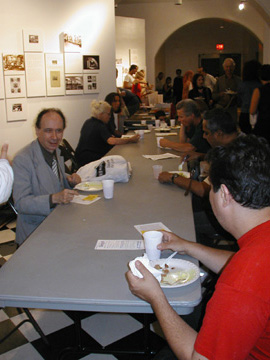 Inside the Hall, there was constant disagreement,but in our dining area there was total agreement. People who had never met but who did not agree in the discussion area were now sitting together conversing like great friends while enjoying a wonderful prasadam feast. Prasadam seems to bring out the best in people and enables even total strangers to find their common ground.

Encouraged by the reception we received at Cooper Union, we now intend to approach the United States Mission to the U.N. where we would like to present our solution to the problem of world terrorism. The solution is Krishna consciousness and, specifically, the chanting of the Holy Name, the distribution of Krishna prasadam and an education based on the knowledge contained in the Bhagavad-gita. 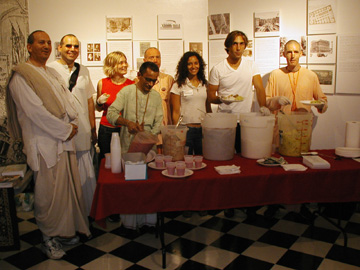 (Just as a point of interest, it was Lincoln’s address at the Great Hall in 1860 entitled “Right Makes Might” that he said won him the presidential election that year.)