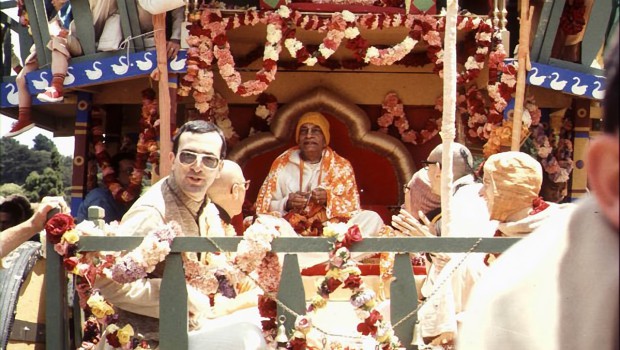 Srila Prabhupada single-handedly revived the mission of Lord Caitanya and spread it worldwide and thus fulfilled the prophecy of Sri Chaitanya, Sri Nityananda, Srila Bhaktivinoda Thakura, and Srila Bhaktisiddhanta Sarasvati. He did this at a time when the whole world was lost in atheism, sahajiyism, hedonism, and all varieties of degradation and sin born of nirvishesa and sunyavadi.

Srila Prabhupada established the final mission siddhanta of the Gaudiya Vaisnava Sampradaya and made the mercy of Lord Chaitanya and the Maha-mantra freely available on a mass scale. He demonstrated the full feature of guru-tattva and guru-puja while remaining a humble mendicant in the sankirtana mission of the Sampradaya Acaryas.

We also expect dozens of children and matajis and friends and guests. Srila Prabhupada will be personally present in both vani and vapu, by the grace of the assembled disciples of His Divine Grace.

This festival in honor of Srila Prabhupada is aimed at uniting devotees who understand that preaching the mission of Sri Caitanya Mahaprabhu is most effective when we work cooperatively to help bring all sincere souls to the merciful shelter of the Jagat Guru, Srila Prabhupada, the founder and eternal guru of the Hare Krishna Movement.

Devotees who plan to attend are advised of the following information:

Programs begin on Friday afternoon, July 20th and the festival lasts through July 23rd. The gathering will be at the northeastern campground at Diamond Lake, which is close to World Wonder Crater Lake in southern Oregon. Devotees are advised to make prior reservations by calling 1 877 444 6777. Try to reserve in Loop A. Diamond Lake Lodge, for room or cabin reservations at 1 800 733 7593. For further information call Damaghosa at 360 856-5411 or Gaura Karuna at 541 865-7977.

Follow the lake drive east, bearing left, to the campground on the lake’s northeast shore.

Watch for signs “Prabhupada Mela” and colored ribbons or flags.

Night temperatures – may be as low as 45 degrees even in July.

Roseburg is the last good stop for major supplies and groceries and gas at reasonable prices. There are two or three small stores with gas pumps on Hwy. 138 East along the way to Diamond Lake. There is one store and gas station at the Lake.

A Global Sanga of Prabhupada Disciples →