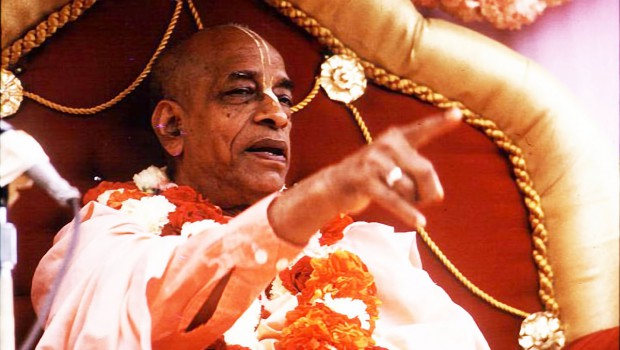 First, to have cooperation we have to have a common goal. In the case of Prabhupadanugas, the common goal is to preserve, practice and distribute, the original teachings of Srila Prabhupada. This means printing and distributing the original books, it means practicing to the best of our ability all the discipline and regulative principles, and very importantly, it means bringing new bhaktas to be initiated through “ritviksm” as Srila Prabhupada disciples.

This last duty is very important, since it’s what Srila Prabhupada wants, and it’s the only way by which the preservation, practice and service to Srila Prabhupada may continue, purifying and delivering future generations of conditioned souls.

Doing things together in cooperative association, is a very important Krishna conscious principle that gives the devotees much strength. Srila Prabhupada is very keen on this Krishna conscious principle, so much, that the main reason for him to established ISKCON, was so devotees may help each other advance in devotion in a united cooperative spirit. In fact Srila Prabhupada included the word sankirtan (together), the word unity, and the word together, in 4 of the 7 reasons or purposes for ISKCON.

Many years ago, Srila Prabhupada had also founded the League of Devotees, with the same aim of united cooperation. We have all seen that when we are together in association of other devotees, we have more strength and determination to do our sadhana, chanting 16 rounds, follow the 4 regulative principles and preach as we are supposed to do.

This spirit of cooperation in unity, was very healthy at the time Srila Prabhupada was still with us in his vapu form due to his superb motivation and clear vision of goals. On the other hand it’s very obvious, that the cooperative united effort came apart soon after 1977, when the ISKCON GBC decided that 11, and later over 100 devotees be promoted as “good as Krishna” gurus. As “good as Krishna gurus”, these “devotees” exercised a full independent mood, and there was no way that a 28 men GBC could control them.

In this way, the unity and cooperative effort that ISKCON had deteriorated totally, because the goal was no longer to please Srila Prabhupada, but to have over 100 cult camps each thinking that their “guru” was the best or only true guru. Even today, each “guru” and GBC desperately try to promote their own agenda by being ultra “clever”, manipulating and also exploiting devotees for their very misguided visions. Of course this has resulted in mass abuse, even child molestations and even murders among other maladies.

One big problem however that we may be facing, is the horrendous possibility that the same seeds and ill growths that took over and destroyed ISKCON, could find fertile ground to sprout and grow and also very much affect the Prabhupadanuga movement. Weather it’s the IRM dictatorship types, or a less known and smaller group, or a single very passionate and angry individual, it’s obvious and unfortunately a reality, that these bad seeds and growths have at least in one place made a stay. This development should be a true cause for alarm, and the true concerned and dedicated Prabhupadanugas should be very keen in stopping this trend wherever it may manifest.

We must utilize the proper most ideal Krishna conscious insight and discrimination, and with determination oppose any malignant growths if we are not to have the Prabhupadanuga movement fall into the same corrupt practices that turned ISKCON into a destructive criminal cult. Particularly, this means that we have to make sure that no one person that does not follow nicely proper Vaisnava etiquette, be supported and or allowed to take a leading role representing Srila Prabhupada and the Prabhupadanuga movement. Any compromise and excuse, should not be tolerated.

We should be very very careful with the idea that because Srila Prabhupada engaged all kinds of low class individuals in service, that we can do the same and expect the same good results. We are not Srila Prabhupada, nor should we imitate him! Srila Prabhupada is the supremely empowered Acarya, he can do all kinds of things, but we are underpowered fools, and can’t try to do all the things he does, nor should we imitate him expecting the same results for they will not be there. If we engage all kinds of low class people, and or allow them to have a prominent position, it will certainly detrimentally affect the lives of other sincere devotees, and the reputation of the Prabhupadanuga movement.

A good example is ISKCON. ISKCON against all good advice, insisted in engaging rouges with horrible results. It kept and keeps saying., “well, he’s doing nice service prabhu”, despite the fact these low class individuals were and are exploiting, ill treating and abusing others and giving the whole movement a horrible reputation. Of course those that allow or promote this, don’t realize that their own motivations are very much placed into question, for allowing criminally inclined individuals that often are not Vaisnavas, to “represent” Srila Prabhupada. If this attitude and action is seen in the Prabhupadanuga movement, it will makes it CLEAR that the motivation of these Prabhupadanugas is not pure but at the very least materially tinged, and or springing from material anger or the like.

Prabhupadanugas should question if Srila Prabhupada would allow in his army that cooperation be expected, but that it is coupled with the fact that a fellow soldier may “shoot to kill” any cooperator without notice at any moment, causing the possible “death” of the attacked individual and all kinds of chaos to the army. Of course we know, that Srila Prabhupada would never allow such ideas. Of the contrary, there is record that Srila Prabhupada would at once punish those that did not appreciate and abused other devotees. Often he sent the offenders to preach at distant places where they could not continue to abuse others.

The principle of treating devotees with care. consideration and in an affectionate way, is categorically a higher principle and pleases Lord Krishna and the spiritual master more that worshiping the Lord on an altar. Yes, any father is more pleased and delighted to see loving exchanges among his children than if that affection was directed to him.

So in resume, there can be no cooperation if there is no common goal. Nor there can be true cooperation from thinking sincere devotees, if lack of appreciation, manipulation, inconsideration and ill treatment is allowed and not checked. If ill treatment is tolerated, then we can only expect isolated very questionably motivated devotees to get support from materially motivated or very naive, ignorant and even violent crazy supporters types. This will not lead to a core of devotees who can be fully trusted, which is a real need of the day, but to continued abuse of nice prospects, and to perpetuating the cult mood and impression that the general public has so vivid in their minds of the whole movement.

Therefore, ill or inconsiderate or unappreciative treatment of devotees for any reason, should be seen for what it really is, a real cancer that under no circumstances should be tolerated. In this way we may have a better quality of devotee come forth to farther serve Srila Prabhupada.

What could help to identify devotees that don’t know how to properly associate with Vaisnnavas and thus represent Srila Prabhupada properly, is checking their background. Conditioning is not so easily undone, even with much chanting since most chanting is mixed or offensive. So if an individual is known to have had a very hard life with much crime in the past for example, it’s very likely that this person is very prone to engage in criminal activity now or in the future, and he/she does not make a good prospect to be a trusted leading Prabhupadanuga. Needless to say, it would be very rare if this type of devotee will ever make a significant contribution toward what Srila Prabhupada and Krishna consciousness are all about, which is true love, trust and devotion, but of the contrary they will with almost all certainty, misrepresent Srila Prabhupada in their sure of themselves non Vaishnava ways.

There is an example that we can learn from in this regard. The US congress membership is currently asking a Mr. Condit of Modesto CA, to resign the congress, because he was caught in an extramarital relationship and lied about it. We can learn in this instance from these karmis, and we should do the same with those that manifest too much non vaishnava behavior. We should ask them to resign, if we are to serve Srila Prabhupada how he wants, in a true Vaishnava cooperative way, and if we are to reduce the destructive cult reputation the movement has due to the fact that it very much is a cult due to not checking the low class.

Last but very important, we should be careful to appreciate those devotees that have the insight, are courageous, sensible and detached enough, to blow the whistle so to speak. Lets not be like ISKCON, who when a devotee spoke out to do the right thing, he was at once character assassinated, or asked to shut up, or pushed aside or violently attacked, or kicked out of the society, or even killed. The last thing we want is ISKCON part 2 in the Prabhupadanuga reform movement, since what we and Srila Prabhupada really want, is true trust, cooperation and loving relationships and devotion. Thank you for your attention. I’m very interested to communicate with devotees that would like to serve Srila Prabhupada together in a true spirit of cooperation, truly appreciating each other and aiming at true loving and trusting relationships. If you can, please contact me at: srvnt108@juno.com or at 661-944-2672 to discuss possibilities.

Thanks for your attention. All glories to Srila Prabhupada.

A Global Sanga of Prabhupada Disciples →