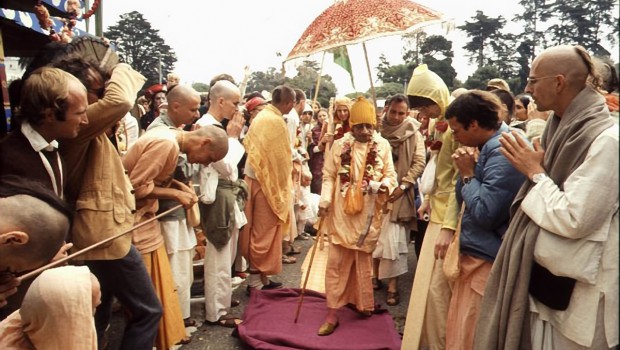 Many dangerous ideas have infiltrated the Krishna consciousness movement in recent years. Most of the institutions established by Srila Prabhupada have been deviated by false ideas and as such cannot effectively protect devotees, preach, or train new devotees.

Concocted ideas introduced by Iskcon leaders have helped deviate most students of Krsna consciousness from the aim of human life, have led them to be deluded by sahajiyas, and have inspired them to reject Srila Prabhupada’s mission to follow other gurus and leaders who are deluded.

To fulfill the aims of Srila Prabhupada’s mission (precisely as He has already clearly written) and preserve the siddhanta of the Gaudiya Sampradaya, we propose a worldwide sanga among Srila Prabhupada’s disciples based on our clear understanding of the following truths of the Hare Krishna movement:

1.) Srila Prabhupada is a great nitya-siddha Vaisnava sent by Lord Caitanya and Krishna to save the world from atheism and dangerous false doctrines born of nirvesesa and sunyavada. His appearance, activities, and disappearance are transcendental. He is the predicted saktavesa-avatara who preaches Krsna consciousness all over the world. He established the global Krishna consciousness movement single-handedly and is therefore worshipped as Jagat Guru.

2.) Devotees can be liberated in this lifetime by understanding that Lord Caitanya and His confidential associates are nitya-siddhas, whose births and pastimes in this world are completely transcendental.

4.) Anyone can get the full blessings of Lord Caitanya and all previous Acaryas by accepting Srila Prabhupada as sad-guru and following His instructions.

6.) Devotees initiated according to the ritvik system established by His Divine Grace and fixed in following Srila Prabhupada’s instructions are disciples of Srila Prabhupada.

7.) The primary aim of missionary work in Krsna consciousness is to help devotees accept Srila Prabhupada as Jagat Guru and help devotees take part in His sankirtana mission, which is fully empowered by Lord Caitanya and Lord Nityananda.

9.) An Acarya in the Gaudiya Vaisnava Sampradaya is by definition a self-realized pure devotee, or uttama-adhikari, free from all defects and illusion. A Vaisnava Acarya is all-powerful and is never deluded or confused in any circumstance, even for a moment.

10.) Preachers who claim to be the guru of their followers yet reject or preach against Srila Prabhupada’s instructions are offenders or sahajiyas with no substantial connection to Srila Prabhupada’s mission. Serious students should carefully avoid such association. (Asat sanga tyaga, ei vaisnava achar.)

11.) The Acarya is worshipped on the same level or even greater level than the Deity or Krishna Himself. “Prabhupada” literally means “one who takes the position of Krsna, the Supreme Master.” It is not possible to fully describe Srila Prabhupada’s glories or the glories of other great Acaryas like Srila Bhaktivinoda, Srila Gaurakisora, or Srila Bhaktisiddhanta Sarasvati, all of Whom are fully empowered nitya-siddhas. (These four Acaryas are the main gurus for all devotees in the spiritual line of Srila Prabhupada. Srila Prabhupada established Their murtis and pictures, along with His own, as mandatory on all altars of worship, and fasting and feasting as mandatory in all ashrams and temples on Their Appearance Days. No other form of formal guru worship is authorized in Srila Prabhupada’s movement.)

12.) It is the desire of Srila Prabhupada and our predecessor Acaryas that there be a worldwide sanga of Lord Caitanya’s devotees and that devotees act cooperatively to preach the movement of Lord Caitanya in all corners of the globe, following the direction of the Jagat Guru. (Mahat sevam dvaram, ahur vimuktesa.)