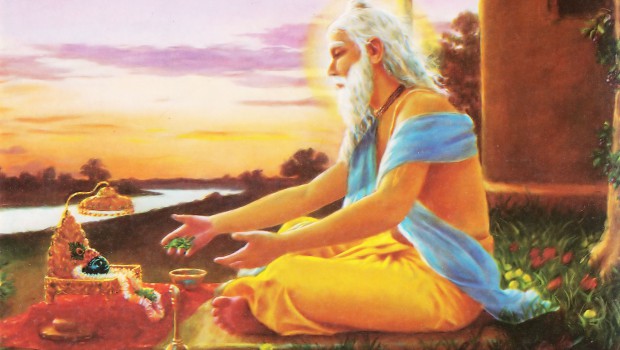 Published on May 7th, 2022 | by mulaprakrti-devi-dasi | Full size image

This story was heard in Mayapura in 1980. A man came to the ISKCON’s Caitanya Candrodoya Mandira carrying with him a copy of the Back of Godhead article about Srila Prabhupada, entitled A Lifetime in Preparation.

“Just recently an amazing realization occurred to me that I wanted to share with devotees everywhere. I have been the pujari and sevaite at the house of Adwaita Acarya for many years. I was also there back in the 1940’s and 50’s. At that time, I noticed that one grhasta Bengali devotee used to come to the temple quite regularly. He was dressed in a white khadidhoti and kurta and he always came alone. He would sit in the back of the Mandira without speaking, and would chant harinama on his mala very quietly and deeply. I noticed that he came on the weekends, usually once every month or two in regular way. After chanting there for many hours, he would always thank me when he left. His presence was profound and I became attracted to him. Since his devotions were solitary, I never spoke to disturb him. Sometimes I happened to notice that while he was chanting, his eyes would be full of tears and his voice would be choked up.”

“Then, for a very long time he did not come. However, I distinctly recall that in August of 1965, I saw a saffron-clothed sannyasi sitting in the back of the Mandira. In a moment I recognized him to be my old friend from before. Again he sat for a long time chanting Hare Krsna. I could see his beads moving, his eyes closed in concentrated devotion. He was weeping unabashedly even more than he used to while he took the Holy Name. Finally, as evening came, he paid his dandavat pranama for long time. When he arose he came up to me and again thanked me for my seva here at Adwaita Bhavan. I asked him. Who are you? I remember you from so long ago.'”

“He replied, ‘My name is Abaya Caranaravinda Bhaktivedanta Swami Maharaja. I am an unworthy disciple of His Divine Grace Srila Bhaktisiddhanta Sarasvati Thakura, Srila Prabhupada, my divine master. I have been coming here for such a long time because my Gurudeva has given me an impossible mission. His desire was for me to go across the ocean to the Western countries and spread the sublime teachings of Sri Caitanya Mahaprabhu. There are countless souls there who have never heard of Sri Sri Radha-Krsna and so they are suffering greatly. I have not known how this mission of his will be successful, so I have been coming here to this special house of Adwaita Acarya, where he, Nityananda Prabhu, and Sri Caitanya Mahaprabhu would gather together to plan the sankirtana movement. It was here that they launched the inundation of love of God that swept India and continues to this day. Thus, I have been praying very earnestly here that they will all give me their mercy that somehow they will empower me and guide me. I want to satisfy my gurudeva’s desire, but I am feeling unqualified to do this.'”

“As he was speaking to me, I saw tears falling down on his cheeks again. Then he continued, ‘Tomorrow I am leaving for Calcutta to go upon a ship across the ocean to America. I do no know what will befall me there, but I am praying most earnestly here for help.’ Then he very humbly asked me for my blessings. I was indeed moved by this Vaisnava’s sincerity and determination was I watched him depart upon his journey.”

“It was a few years later that I began noticing, for the first time, white Vaisnavas coming to Adwaita Bhavan. They were wearing dhotis and saris and chanting on tulasi-mala. I never spoke to any of them but then one of them gave me this “Back to Godhead” magazine from America. As I looked at the photographs, suddenly I recognized a painting of the Founder-Acarya who had brought Krsna consciousness to the West. It was a picture of my friend, Bhaktivedanta Swami, who had come and prayed here so many times before. Then I realized that he has actually accomplished that impossible mission of his Gurudeva. I saw that it was indeed he, starting alone and without pretense, who had accomplished this glorious miracle against all odds.”

“As soon as I saw this, I came here to his temple in Mayapura to tell you this information. I know that he has gone from this world now, but I though perhaps you might want to know this story about you and my beloved Srila Prabhupada.”

Excerpt from Our Srila Prabhupada — A Friend To All — Early Contemporaries Remember Him — Compiled by Mulaprakrti devi dasi.

You can purchase this book at: