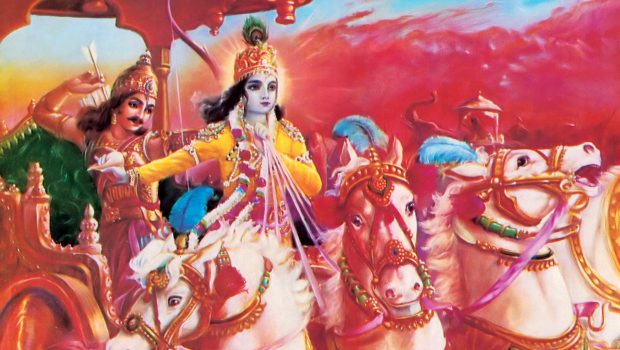 For inspiring occasional spiritual emails subscribe to the Bhagavad-gita As It Is newsletter at:

To get the most benefit from our study of the Bhagavad-gita we need to approach it in the correct way. Many study the Gita but are unable to actually understand it and therefore are not successful in achieving the immense benefits the Gita offers us because they don’t study the Gita in the correct mood.

The Gita is the introduction and essence of the Vedas, the vast storehouse of knowledge available in the timeless spiritual texts from India. Vedic knowledge is not a question of research. Our research work is imperfect because we research things with imperfect senses. Instead of trying to understand things by the power of our own research and speculation we have to accept perfect knowledge which comes down, as stated in Bhagavad-gita, by the parampara, disciplic succession.

Bhagavad-gita As It Is, by His Divine Grace A.C. Bhaktivedanta Swami Prabhuapda is the most widely studied edition of the Bhagavad-gita and perhaps the only edition that presents the Gita “As It Is.”

We have to Kick out Our Ideas and Surrender to Krishna’s Ideas:

The vast majority of people have their own ideas, their own philosophy, their own beliefs and many have presented translations and commentaries on the Gita contaminated by and trying to reinforce their own ideas, philosophy and beliefs. However, it is impossible to understand or achieve any benefit from studying the Gita in this way.

We have to understand Bhagavad-gita in the same way as Arjuna understood it from Krishna. In the beginning, also, Arjuna had his own idea and was not very anxious to follow Krishna’s instructions. Krishna wanted Arjuna to fight in the battle at Kuruksettra, but Arjuna was reluctant to fight and presented many arguments to Krishna against the fighting.

However, Krishna wanted the battle, Krishna wanted Arjuna to fight, so Krishna’s instructions to Arjuna in the Gita actually start at the point where Arjuna kicks out his own ideas and speculations as to what should be done and instead simply surrenders to Krishna and accepts Krishna as his spiritual master.

Vedic knowledge is received from transcendental sources, and the first words were spoken by Lord Krishna Himself. The words spoken by Krishna are different from words spoken by a person of the material world who is infected with four defects. A materialist:

With these four imperfections, one cannot deliver perfect information of all-pervading knowledge.

So to actually benefit from Bhagavad-gita As It Is we have to first realize that spiritual knowledge descends from Krishna to us through the parampara or disciplic succession. Spiritual knowledge is realized by the process of submissive hearing from the proper authority and relevant questions. Our advancement in spiritual life begins from the point of surrender.

If we properly utilize the instructions of Bhagavad-gita, then our whole life will become purified, and ultimately we will be able to reach the destination which is beyond this material sky. That destination is called the sanatana sky, the eternal spiritual sky. In this material world we find that everything is temporary. It comes into being, stays for some time, produces some by-products, dwindles and then vanishes. That is the law of the material world, whether we use as an example this body, or a piece of fruit or anything.
But beyond this temporary world there is another world of which we have information. This world consists of another nature which is sanatana, eternal. We are eternal spirit souls temporarily covered by these material bodies, Krishna is eternal, but Krishna has no material body, He is completely spiritual.
The whole purpose of Bhagavad-gita is to revive our sanatana occupation, or sanatana-dharma, which is the eternal occupation of the living entity. We are temporarily engaged in different activities, but all of these activities can be purified when we give up all these temporary activities and take up the activities which are prescribed by the Supreme Lord. That is called our pure life. If we can be situated in this pure spiritual consciousness at the time of death we will no longer have to take birth in the material world but will return back to the eternal sanatana spiritual sky, we will go back home, back to Godhead, back to Krishna.

The Illusion of Sense Gratification:

Since birth, we have been conditioned to think if we can satisfy our senses we will be happy. Practically everyone around us is working on this principle. “If I get more money I will be happy,” “If I find a nice girl or boy I will be happy” and so on. But this is a false idea. Real happiness does not come from satisfying the senses of the body. Why this is so and how we can get real happiness will be revealed as we study the Bhagavad-gita.

Please Make a Little Time in Your Life to Read these Emails!

Everything we will discuss will be based on Bhagavad-gita As It Is. You will get a lot more out of this if you have your own copy. To make it easy for you to get your own copy of the Gita I have bundled together all the books and a DVD we will be using, a total value of more than $40, for only $9.95.

This is a limited time special offer for Krishna Connect subscribers. Please take advantage of this and place your order now by:

3 Responses to Subscribe to Bhagavad-gita As It Is Newsletter!