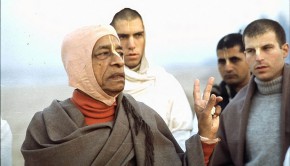 I am the voice of many crying in the spiritual wilderness of the prisons. We need a weekly program of sankirtana, classes, spiritual council and association