Srila Prabhupada, the focal point of ISKCON, is never too busy to answer any question. With each encounter he opens the doors to spiritual knowledge 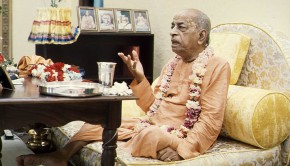 The woman becomes pregnant and the man goes away. She is then embarrassed with the child. She has to beg from the government. Is this a very nice thing?