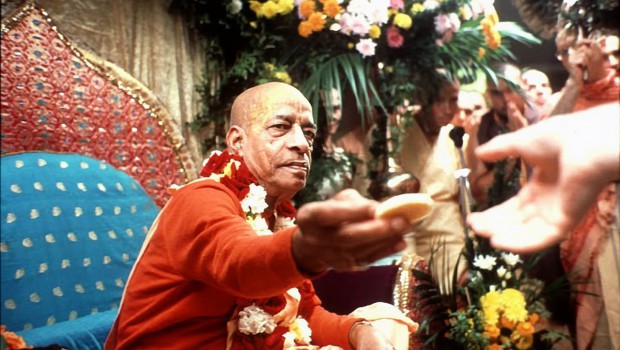 Prabhuji, this is the first letter I am writing to you. I am dividing this letter in two subjects, viz;1) My Details-in-short, 2) The Special- Incident.

Prabhuji, whatever I have mentioned above is true and correct. In my life this is a very special dream. On 9th March 2001 i. e; on Gaura Purnima- day I heard the Gayatri Tape of Srila Prabhupada through my right ear.

**Prabhuji, I cannot wait, because my conscious is not allowing me to get myself called by the others, Shri Krishna Chaitanya Das. By the transcendental arrangement of the Supreme Absolute Truth-Shri Shri Radha Krishna I received the initiation from Srila Prabhupada, our beloved Gurudeva.

As a preacher I cannot tell such incident to the general mass of people otherwise, some unscrupulous person will consider such transcendental- incident a bluff or even may take the bad advantage of my dream.

**So, I am requesting Your Goodself to give me the same name************ “KRISHNANANDA DAS”** as given to me by Srila Prabhupada. Thus, I will be able to tell everyone that I have taken the ritvik initiation by hearing the Gayatri Tape of Srila Prabhupada and by getting the initiated name from Your Grace. Please do the needful.

**Prabhuji, please accept my humble request. I will remain eternally- indebted to you.

PLEASE SEND ME AN EARLY REPLY

Your letter is very nice and transcendental. I had to think about it for a day as I am not an official ritvik initiator. But since the GBC is not following Srila Prabhupada’s order for the ritvik system, somebody has to do this service. I asked the advice of a few Godbrothers and they agreed with me that I should approve your new spiritual name; Krishnananda Das. When the spiritual master appears in a dream it is him for real. This shows that you are a very special soul to get this direct mercy. May you always be a strong devotee and keep Srila Prabhupada and Krsna proud of you and in the end go back home, back to Godhead.

Hoping this meets you well,

I think your letter is so nice that it should be posted on the internet but asked me to keep it confidential; so I am asking you for permision to send it to Krishna. org

Waitng on your reply,

With my letter, please attach the copy of your letter that you have considered my request by approving my name-“Krishnananda Das” as given to me by Srila Prabhupada. Our respected Godbrothers whom you consulted for approving my name are correct, that someone has to start giving the ritvik initiation, because of the GBC members disobedience for following the direct order of Srila Prabhupada.

Prabhuji, therefore I request you to advance the missionary cause of our Gurudeva Srila Prabhupada by becoming the Ritvik Initiator. This way you will save many conditioned souls by giving them the ritvik initiation; i. e;linking them with Srila Prabhupada. Please do the needful. Srila- Prabhupada will definitely embrace you for such great work. Please send me a reply, that you have definitely approved my new- initiated name-“KRISHNANANDA DAS” as given to me by Srila Prabhupada in my transcendental dream. Thank you very much.

I thank you for your well written letter. I have recommended many devotees for ritvik initiations by both Kapindra Swami and Yasodanandan Prabhu. I have recommended names and they were accepted. I don’t act as a ritvik initiator now because the others are. I can say that I’m sure your name “Krishnananda das” as given to you by Srila Prabhupada is bonafide. I would recommend that you get an official ritvik initiation. We had a sacrifice at the Radha Damodara temple on Srila Prabhupada’s Dis. Day last year where we initiated 5 devotees including my wife. It was very nice just in front of Sri Rupa Goswami’s Samadhi.

Srila Prabhupada said in a letter that it is not generally the case that a devotee gets his/her spiritual name before their sacrifice but in some cases it is acceptable. I would say that yours is such a case. So as far as I am concerned you should keep using your new name and not worry about what others may say. Then maybe next Kartika, in Sri Vrindavan Dhama, you can be officially initiated on behalf of Srila Prabhupada.

Hoping this is acceptable to you Your friend and servant,

One Response to The Importance of the Formal Initiation Ceremony