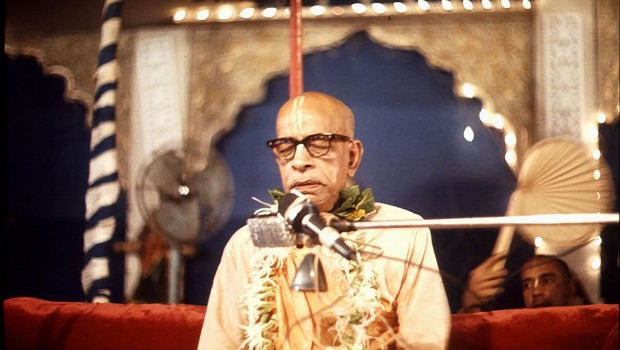 I would like to make a comment on the article by Jadurani Dasi on VNN. The main point of her article is that we need Narayan Maharaj to interpret Srila Prabhupada’s books for us. I’d also like to know who is going to interpret Narayan maharaj’s books and lectures after he leaves his body. Perhaps Jadurani would like to perform this service?

“Prabhupada is certainly present in his books. No one will deny that. But it is by the association and guidance of pure devotees that we neophytes can get access to the deep meanings of those books. The great depths of Prabhupada’s books are like a treasure chest, and the key to unlock the lock is in the hands of pure devotees.”

Furthermore, Srila Prabhupada went to great trouble to be sure that his lectures were recorded on audio tapes beginning in 1966. A quote from “The Beginning” – Srila Prabhupada’s 1966 New York diary:

Srila Prabhupada’s resolve is evidenced by the purchase of his first tape recorder, a major expenditure for him. He started recording his classes, kirtanas and bhajanas. He wrote in his journal: “There was no response of the visitors invited to come and join Hari Kirtan this evening at 7:30 pm. But I alone executed the Kirtan ceremony with my tape recorder till 10 pm.” Srila Prabhupada’s prescience in preserving his spoken word has resulted in a permanent legacy of over two thousand hours of invaluable tape recordings.

Many of us have heard the ‘Brahma Samhita’ recording by Srila Prabhupada which he recorded all alone in his room in New York city. May I humbly ask the Narayan maharaj followers – for WHOM was Srila Prabhupada making this recording? Obviously not for himself since he is already a self-realized soul. Srila Prabhupada recorded his preaching in writing and on audio tapes for the benefit of the thousands and millions of devotees who would come in the future so that they would also have the benefit of his direct association through sound vibration.

Are we to believe the ridiculous notion that we must have Narayan Maharaj explain to us what Srila Prabhupada is saying on his lecture tapes? Prabhupada is available for anyone to associate with DIRECTLY through his lectures and books.

I’d also like to know who is going to interpret Narayan maharaj’s books and lectures after he leaves his body. Perhaps Jadurani would like to perform this service!