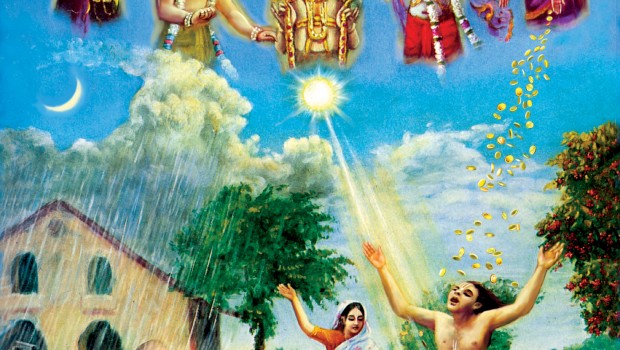 “Men in this world desire success in fruitive activities, and therefore they worship the demigods. Quickly, of course, men get results from fruitive work in this world.” (Bhagavad Gita 4.12)

Many people get confused when it comes to God and the demigods. Krishna is the Supreme Personality of Godhead and He is param-isvara, the Supreme Controller and there can never be any other controller equal to or greater than Krishna. However there are many other isvaras or controllers in the universe who have varying degrees of power over different departments of the universal management.

In this way Krishna delegates the management of the affairs of this and the many other universes in the material world to His devotees who still have some material attachments so He can simply enjoy in Vrindavan.

Actually these demigods are just like us. They are ordinary living entities like you and me but as a result of their performance of sacrifices and practice of austerities they have been elevated to the higher planets and have been given positions of power and responsibility by Krishna. It is just like if a whole group of young men start working for a particular company they are all the same in the beginning but some will become very successful and be promoted in the company and become managers and get powerful positions and some will not. So the demigods are like the successful workers in the company who have been promoted to high management positions. In reality there is no difference between the managers in the company and the ordinary workers. It is just that the managers, as a result of there hard work and dedication to the company, have been promoted to the high management positions.

But Krishna is not like that. Krishna is always Krishna — The Supreme Personality of Godhead. He does not have to work to advance in the universal management system and fight his way to the top like the demigods have to. No. Krishna is the Supreme Personality of Godhead eternally. He is always on the top. And Krishna is actually all-powerful, whatever He desires immediately happens. The demigods are not like that. Krishna has given them some authority over some department so in that department they have some power but they have no power in other departments and they have no power to grant anyone liberation from the material world.

For example Lord Indra is the King of Heaven and he is in charge of the clouds and weather and lightning. So Indra is very wealthy and lives on his heavenly planet with his associates in a very opulent and comfortable way and he has power over the weather — that is the service Krishna has given him. So if one wants to be blessed with good weather so his agricultural activities will be a success he may worship Lord Indra for this purpose and because Indra is the controller of the weather if Indra is pleased he can send the clouds to that farmers place and give nice rains so his agricultural activities are successful. Also if one worships Indra and thinks of him at the time of death he can be transferred to the heavenly planet that Indra lives on and live a very comfortable life there.

But Lord Indra’s powers are very limited. Beyond controlling the weather and ruling over his heavenly planet he does not have any authority anywhere else. And his authority is given to him by Krishna. So with a little contemplation one can see that there are many millions of demigods in charge of the countless departments in the material world that effect us in our day-to-day lives. So if we want to worship demigods to satisfy them individually one-by-one that will be a very difficult task. In India there are people who try to do this. They have a huge list of demigods and try to worship them all for different boons or benefits.

The benedictions of the demigods are strictly limited to material benefits. They can not give spiritual benefits because they themselves are not liberated from the material world. Even though the demigods live on planets with a standard of living far, far higher than the standard of living we have on earth, still they have material bodies which will also get old, get sick and die. They may live for fabulously long periods of time but ultimately their material bodies will also get old, get sick and die.

In India there is a great misconception about these gods or demigods of this material world and men of less intelligence, although passing as great scholars, take these demigods to be various forms of the Supreme Lord. They make no distinction between Krishna and the material demigods considering that worship of any of the ‘gods’ is equal to the worship of Krishna.

Anyone who thinks that God and the demigods are on the same level is called an atheist, or pasandi. Even the great demigods like Brahma and Shiva can not be compared to the Supreme Lord. In fact the Lord is worshiped by the demigods such as Brahma and Shiva (siva-virinci-nutam). The demigods are powerful men within this material world in the same way that the President of the United States is a powerful man in this world. In our experience we see that many human leaders are worshiped by foolish men with the idea that through that worship and service they will get some material benefit from the great leader. People are working hard in their company worshiping and trying to please their ‘boss’ so they will get promoted within the company and earn more money. That is demigod worship. The ‘boss’ is a person who has achieved a higher position in the company by worshiping the company leaders and serving them and performing austerities like working hard and doing overtime without pay… As a result he has advanced in the company and has some power and authority over a small section of the company. Worshiping the boss at work and worshiping demigods like Brahma, Shiva, Indra, Kali, Durga, etc. is EXACTLY the same thing. Just like worshiping the boss at work will not help you at all spiritually, but it may help to increase your pay packet a little, worshiping the demigods can not help you spiritually but it may provide some temporary material benefits.

Foolish people worship the demigods because they want immediate results. They get the results, but they do not know that the results so obtained are temporary and are meant for less intelligent persons. The intelligent person is in Krishna consciousness and he has no need to worship the paltry demigods for some immediate, temporary benefit. The demigods of this material world, as well as their worshipers, will vanish with the annihilation of this material world. The boons or benedictions of the demigods are material and temporary. Both the material worlds and their inhabitants, including the demigods and their worshipers, are bubbles in the cosmic ocean. 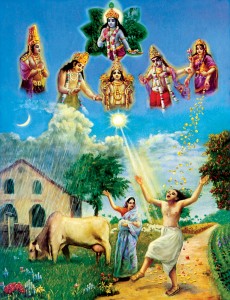 In this world human society is mad after temporary things such as the material opulence of possessing land, family and enjoyable paraphernalia and to achieve these things they worship demigods or powerful men in human society. If a man gets some ministership in the government by worshiping a political leader, he considers that he has achieved a great boon.

So we find everywhere in this world that people are worshiping the so-called leaders or “big guns” in order to get temporary benefits, and they actually achieve such things. Such foolish men are not interested in Krishna consciousness for the permanent solution to the hardships of material existence. They are all after sense enjoyment and to get a little facility for sense enjoyment they are attracted to worship empowered living entities known as demigods.

This verse indicates that people are rarely interested in Krishna consciousness. Generally they are mostly interested in material enjoyment and therefore they worship some powerful living entity in an attempt to achieve this…

132 Responses to Worshiping Demigods Works But…