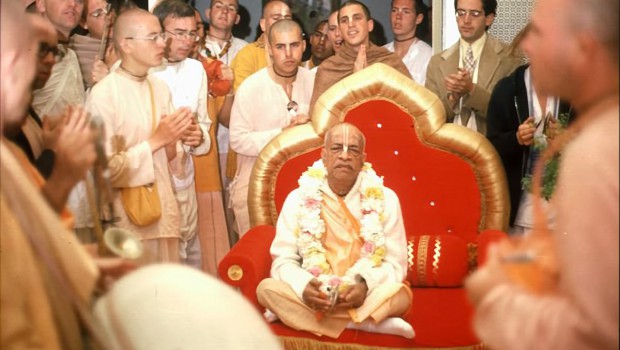 It comes on 21cdroms playable on any of the MP3 cd players which can be purchased online and in stores like Circuit City . This audio library is the only complete set of audio available in such a convenient package which packs 1200 hours of audio into one sweet little cd wallet.

Back in the old times if you wanted to have a complete set of recordings you’d need a truck to carry all the tapes and a few grand to buy them. The amazing thing is that now Srila Prabhupada’s mercy is available even more than ever even after his physical presence.

Association with the form of the spiritual master is understood to be great fortune but even more important is association with the spiritual master through his instructions. Hearing from a Mahabhagavata is indeed most beneficial and now everyone around the world has the opportunity to hear Srila Prabhupada speak daily as he gives lectures, goes on morning walks, addresses persons of all sorts, has radio interviews, chants bhajans and slokas, etc, etc.

With this audio library you can just let the nectar keep flowing. Devotees from around the world are getting their cd’s and everyone is awestruck by this extensive collection of recordings.

As we all more and more increase our reading Srila Prabhupada’s books and hearing his recordings our lives will be perfected and the world will become Krishna Conscious. Check out krishnastore.com. Portable MP3 cd players are available from $40 to $150. Some of them like the Phillips (Circuit City) model come with an adapter that plugs into your car cassette player. Another adapter connects to your car stereo with a transmitter. Both adapters are sold separately online and in stores like Radio shack and Circuit City.

Where to purchase a player:
In stores the best deal I’ve found at Circuit City. They have a player by Classic for $75.00. This one has received a top rating overall for price and quality.