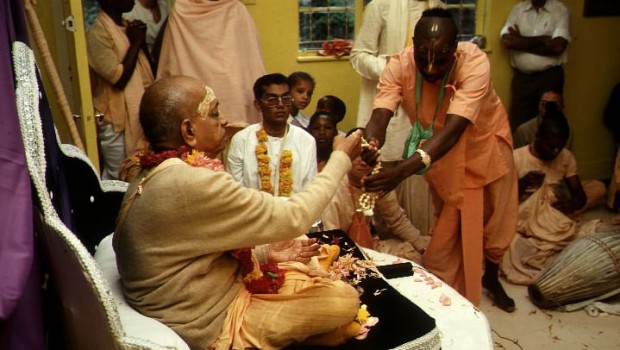 There are many experts from the lower-grade creatures. Ant hill. You are spending so much money for skyscraper building. The ant, they construct big hill as their residential quarters.

Prabhupada: How quickly they come! Just see. And wherefrom they get out of?

Tamala Krsna: Yeah, how do they find out about it? That’s what I don’t understand.

Prabhupada: That they know.

Tamala Krsna: They were all over, and the medicine was up here.

Tamala Krsna: It must be Supersoul telling them…

Tamala Krsna: …that there’s something here. Do they smell it? No.

Prabhupada: Anyway, they are also living entities like us. Whenever there is some sense of enjoyment, they flock together.

Tamala Krsna: They are (indistinct).

Prabhupada: They are expert more than us. You cannot go. Suppose there is one lakh of rupees downstairs. You can get it. You cannot go in one minute. They can do.

Tamala Krsna: So they’re better than us?

Prabhupada: They’re expert. Suppose if I, if somebody informs that “In the corner of the temple there is one lakh of rupees. Somebody has left,” you cannot go in one minute. It will take at least ten minutes. But here it is kept–immediately. So how much expert they are. Just imagine. So why you are so proud that you are scientist, you are expert? You nothing.

Tamala Krsna: Just see. They are already in it again.

Prabhupada: There are many, many experts from the lower-grade creatures. Ant hill. You are spending so much money for skyscraper building. The ant, they construct big hill as their residential quarters. Where they get their food? Where they get their…? But they are living. This is nature’s study. Now you can… So what is this? Ahara-nidra. For eating. So for these four principles–eating, sleeping, sex, and defense–everyone knows. But the human society, they have made it a problem. These small ants, they also require those things, but they have no problem. For defense they don’t require atomic weapon. They know in their own way how to defend. Cats, dogs, animals–everyone knows. Struggling. Our human society, advanced, means they are perplexed with these problems. The human life was meant for self-realization. That problem left, they have created some problems which the animals can solve in their own way. This is the present society. This political struggle and…, what is their aim, objective? To solve these problems. Nothing more. Nunam pramattah kurute vikarma, indriya-pritaye, these four principles, sense gratification. The ant is also struggling. They wanted to enjoy the little sugar in the here. We have driven him. That’s a problem. They have to find out somewhere else.

Prabhupada: Expecting. Hope against hope. This is struggle. That they do not see. They do… We have got this valuable life. What we are doing? We are doing the same thing as the small ants do. So what is the difference between that life and this life? Therefore Krsna comes that “This is not your business. Your business is to surrender unto Me.” Sarva-dharman parityajya. That will be solved automatically. But they don’t. They take advantage of Bhagavad-gita and apply it for solving these problems. Gandhi and Bhagavad-gita–what is that? Political struggle. Such a rascal. And he’s leader? He does not know what is the purpose of Bhagavad-gita. Has Krsna come down to speak how to defend, how to eat, how to sleep? Is there any statement there? Tatha dehantara-praptih. Solve this problem. This is the beginning of Bhagavad-gita. And who, nonsense, understands this? Tyaktva deham punar janma naiti. This teaching… This is a teaching of Bhagavad-gita. And they are taking Bhagavad-gita for solving these problems. That’s all. Ants’ struggle. Violence, nonviolence and… So such big, big rascals are guiding us. What benefit they have given? And they are praised. Sva-vid-varahostra-kharaih samstutah… He’s an animal, and he’s praised by some small animals. That’s all. This is their position. They are not actual leader. They are animals, but because we are small animals, we are praising. So it is very difficult to understand our philosophy, but still, we have to preach. That is our mission. A little drop, maybe like a film or less than that… Still, they are… And again, when you cleanse this, you kill them–you become implicated. You have killed. You have to suffer. They are disturbing; still, you cannot kill them. This is your position. But people are with Flit (a bug killer) killing thousands of mosquitoes and flies, becoming implicated.

Tamala Krsna: We shouldn’t kill them. What about if they’re biting you, right in the process of biting you?

Tamala Krsna: Supposing a mosquito is biting you and sucking the blood.

Prabhupada: Yes, when they bite, you can kill, according to laws of nature. But on the whole, you cannot kill.

Prabhupada: Prevention is better than cure. They are meant for that purpose. God has made. So instead of killing them, you protect your… But if you are in the service of the Lord, you are not responsible.

Tamala Krsna: One great Vaisnava was putting the… There were maggots eating in…

Prabhupada: And that is also story given. Do not believe.

Tamala Krsna: But in the Caitanya-caritamrta there’s mention of one great…

Giriraja: There was a leper, and out of compassion for them…

Prabhupada: Yes. He thought that “I am meant for suffering. Why shall I stop it?” That is exceptional case.