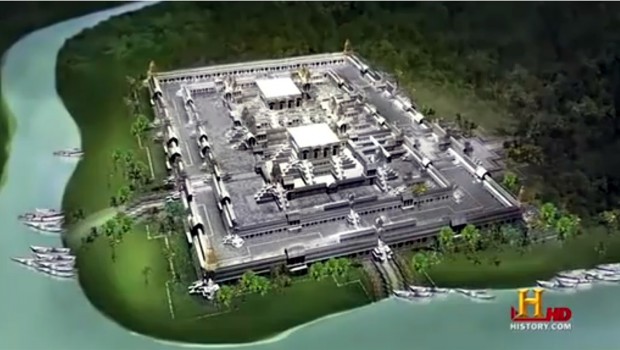 B.K. Parthasarathy writes about a spectacular underwater archaeological find by a joint British-Indian diving team that could rewrite history.

Who would have thought a city that could be older than the Harappan civilization could be lying beneath water right off the coast of Mahabalipuram?

Sometimes, it pays to listen to the stories of humble fishermen. Local fishermen in the coast of Mahabalipuram in Tamil Nadu have for centuries believed in that a great flood consumed a city over 1,000 years ago in a single day when the gods grew jealous of its beauty.

The myths of Mahabalipuram were written down by British traveler J. Goldingham, who visited the town in 1798, at which time it was known to sailors as the Seven Pagodas. Legend had it that six temples were submerged beneath the waves, with the seventh temple still standing on the seashore.

Best-selling British author and television presenter Graham Hancock took these stories seriously. The hypothesis that there may be ruins underwater off the coast of Mahabalipuram has been around at least since the eighteenth century among scholarly circles. 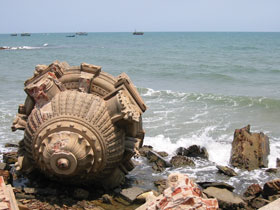 “I have long regarded Mahabalipuram, because of its flood myths and fishermen’s sightings as a very likely place in which discoveries of underwater structures could be made, and I proposed that a diving expedition should be undertaken there,” said Hancock.

Hancock’s initiative resulted in the Dorset, England-based Scientific Exploration Society and India’s National Institute of Oceanography joining hands. In April this year, the team made a spectacular discovery

The SES announced: “A joint expedition of 25 divers from the Scientific Exploration Society and India’s National Institute of Oceanography led by Monty Halls and accompanied by Graham Hancock, have discovered an extensive area with a series of structures that clearly show man made attributes, at a depth of 5-7 meters offshore of Mahabalipuram in Tamil Nadu.

“The scale of the submerged ruins, covering several square miles and at distances of up to a mile from shore, ranks this as a major marine-archaeological discovery as spectacular as the ruined cities submerged off Alexandria in Egypt.”

India’s NIO said in a statement: “A team of underwater archaeologists from National Institute of Oceanography NIO have successfully `unearthed’ evidence of submerged structures off Mahabalipuram and established first-ever proof of the popular belief that the Shore temple of Mahabalipuram is the remnant of series of total seven of such temples built that have been submerged in succession. The discovery was made during a joint underwater exploration with the Scientific Exploration Society, U.K.”

The last claim is questioned by Hancock, who says a scientist has told him it could be 6,000 years old.

Durham University geologist Glenn Milne told him in an e-mail: “I had a chat with some of my colleagues here in the dept. of geological sciences and it is probably reasonable to assume that there has been very little vertical tectonic motion in this region [i.e. the coastal region around Mahabalipuram] during the past five thousand years or so. Therefore, the dominant process driving sea-level change will have been due to the melting of the Late Pleistocene ice sheets. Looking at predictions from a computer model of this process suggests that the area where the structures exist would have been submerged around six thousand years ago. Of course, there is some uncertainty in the model predictions and so there is a flexibility of roughly plus or minus one thousand years is this date.”

If that were true, it would be a spectacular development. Previous archaeological opinion recognizes no culture in India 6,000 years ago capable of building anything much.

Hancock says this discovery proves scientists should be more open-minded. “I have argued for many years that the world’s flood myths deserve to be taken seriously, a view that most Western academics reject. “But here in Mahabalipuram, we have proved the myths right and the academics wrong.”

Hancock believes far more research needs to be done on underwater relics.
“Between 17,000 years ago and 7000 years ago, at the end of the last Ice Age, terrible things happened to the world our ancestors lived in,” he says. “Great ice caps over northern Europe and north America melted down, huge floods ripped across the earth, sea-level rose by more than 100 meters, and about 25 million square kilometers of formerly habitable lands were swallowed up by the waves.

“Marine archaeology has been possible as a scholarly discipline for about 50 years — since the introduction of scuba. In that time, according to Nick Flemming, the doyen of British marine archaeology, only 500 submerged sites have been found worldwide containing the remains of any form of man-made structure or of lithic artifacts. Of these sites only 100 — that’s 100 in the whole world! — are more than 3000 years old.”

Hancock, who was understandably resentful about the NIO’s silence in his pivotal role in making the diving expedition happen — SES gave him full recognition — was himself quite generous about who deserved the greatest credit:

“Of course the real discoverers of this amazing and very extensive submerged site are the local fishermen of Mahabalipuram. My role was simply to take what they had to say seriously and to take the town’s powerful and distinctive flood myths seriously. Since no diving had ever been done to investigate these neglected myths and sightings I decided that a proper expedition had to be mounted. To this end, about a year ago, I brought together my friends at the Scientific Exploration Society in Britain and the National Institute of Oceanography in India and we embarked on the long process that has finally culminated in the discovery of a major and hitherto completely unknown submerged archaeological site.”

– B.K. Parthasarathy is a freelance writer based in Chennai.

21 Responses to City Under the Sea — Dwarka?