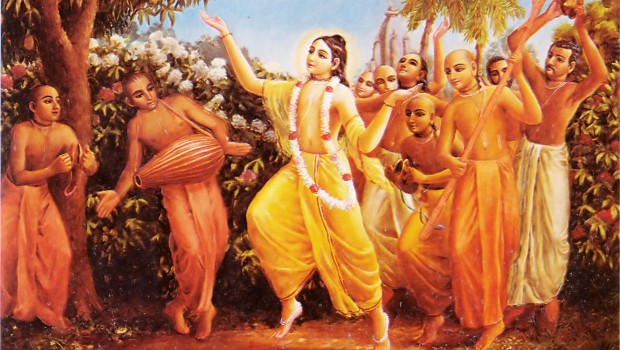 Published on May 21st, 2021 | by daily-devotions--dravinaksa-dasa | Full size image

At His birth, in His childhood and in His early and later boyhood, as well as in His youth, Lord Caitanya Mahaprabhu, under different pleas, induced people to chant the holy name of Hari [the Hare Krsna maha-mantra].

In His childhood, when the Lord was crying He would stop immediately upon hearing the holy names Krsna and Hari. During His pauganda age He became a serious student and also taught disciples. In this way He used to explain the holy name of Krsna everywhere. When Lord Caitanya Mahaprabhu was a student, He asked whomever He met to chant the Hare Krsna maha-mantra. In this way He inundated the whole town of Navadvipa with the chanting of Hare Krsna.

Just prior to His youthful life, He began the sankirtana movement. Day and night He used to dance in ecstasy with His devotees. The sankirtana movement went on from one part of the town to another, as the Lord wandered everywhere performing kirtana. In this way He inundated the whole world by distributing love of Godhead.

Lord Caitanya Mahaprabhu lived in the Navadvipa area for twenty-four years, and He induced every person to chant the Hare Krsna maha-mantra and thus merge in love of Krsna. For His remaining twenty-four years, Sri Caitanya Mahaprabhu, after accepting the renounced order of life, stayed at Jagganatha Puri with His devotees. For six of these twenty-four years in Jagganatha Puri He distributed love of Godhead by always chanting and dancing. Beginning from Cape Comorin and extending through Bengal to Vrndavana, during these six years He toured all of India, chanting, dancing and distributing love of Krsna.

The activities of Lord Caitanya Mahaprabhu in His travels after He accepted sannyasa are His principal pastimes. His activities during His remaining eighteen years are called the antya-lila, or the final portion of His pastimes. For six of the eighteen years He continuously stayed in Jagganatha Puri, He regularly performed kirtana, inducing all the devotees to love Krsna simply by chanting and dancing. For the remaining twelve years He stayed in Jagganatha Puri, He taught everyone how to taste the transcendental mellow ecstasy of love of Krsna by tasting it Himself.

One may raise the question how all three worlds became inundated with love of Krsna, since Caitanya Mahaprabhu performed kirtana only in the Navadvipa area. The answer is that Lord Sri Caitanya Mahaprabhu is Krsna Himself. The entire cosmic manifestation results from the Lord’s first setting it in motion. Similarly, since the sankirtana movement was first set in motion five hundred years ago by Sri Caitanya Mahaprabhu’s desire that it spread all over the universe, the Krsna consciousness movement, in continuity of that same motion, is now spreading all over the world, and in this way it will gradually spread all over the universe. With the spread of the Krsna consciousness movement, everyone will merge in an ocean of love of Krsna. (CC Adi-lila 13:22-38)

O most munificent incarnation! You are Krsna Himself appearing as Sri Krsna Caitanya Mahaprabhu. You have assumed the golden color of Srimati Radharani, and You are widely distributing pure love of Krsna. We offer our respectful obeisances unto You. (Rupa Goswami CC Madhya-lila 19.54)