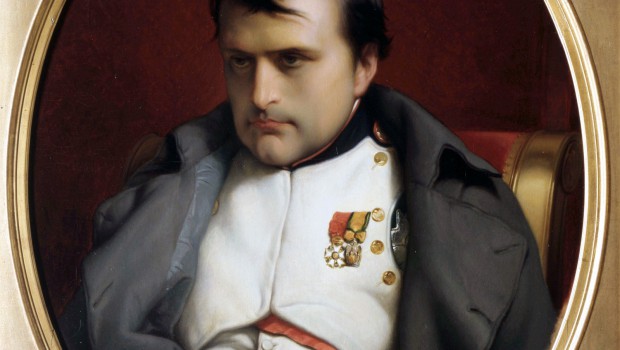 How does one find out what one was in their past life? I have been very curious about this. I sometimes have powerful feelings towards Napoleon. I sometimes wonder if it’s possible that I could have been him in another life. I also have visions of being a monk in Greece, living in a monastery worshiping Jesus day and night.

Certainly we were something in our past lives, but that is not really very important.

So we are in that position. We are drowning in this material world. Our main business is to get out. It doesn’t really matter how we got here or why. In any case the way out is the same:

Dreaming about our past lives will not help us to get out of this material world and get us back home, back to Godhead. For that we have to practice thinking of Krishna 24 hours a day. And to help us do that Srila Prabhupada has given us so many books describing the pastimes of Krishna and Krishna’s pure devotees. So we can chant that Hare Krishna mantra, that will force us to remember Krishna, and we can read the books Srila Prabhupada has given us about Krishna. And then we can talk to our friends, and tell them about the things we have heard about Krishna from Srila Prabhupada. That is preaching, and it will not only help our friends, but it will help us as well.

I don’t know if you realize it but as soon as almost anyone hears about reincarnation they start to imagine that in the past they were some famous person. They never consider they may have been some nobody. But in reality we are a nobody now, we were probably a nobody in our past lives also. There are so many more nobody’s than there are famous persons. It is like the Christians. They hear that Jesus is going to come back so there are tens of thousands of Christians out there imagining that they are that Jesus who has come back. I know it. I have met dozens of these usually young Christian preachers, who are convinced that they are Jesus, and that they have come back to save the world. Of course they are not Jesus and have no potency to save the world. But that is what they are thinking.

The mind is a wonderful thing. It can conjure up so many wonderful stories and images. If we are not very careful we may begin to believe these stories conjured up by the mind… The mind can either be our best friend or our worst enemy. If the mind is controlled it is our best friend. But if we let it run wild and believe all the amazing ideas it comes up with, then it is our worst enemy.

All these thoughts are “mental speculation.” There is really no way of knowing if they are true or not, and I tell you there is very little chance of them being true that you were Napolian, etc. And even if it was true then, “so what!” It makes no difference whatsoever. You are still in exactly the same position now and the solution to your problems is still exactly the same:

It is not easy to find out about your past lives and it is not important to know it, however a good astrologer can give some indications as to what one was in his previous birth and you can see for yourself to a certain extent what you were in your previous birth. This life is a continuation of our previous life. Everyone is born different. Of course as a baby these differences are not apparent. But as soon as the child grows a bit his natural tendencies become obvious. Any mother knows this. You know this. You were interested in certain things in your childhood and those interests have carried through your life. They came from your previous life also.

If a great scientist is working on some project very seriously and it remains unfinished at the time of his death there is a very good chance he will take birth again and as soon as he is old enough he will be remained of the scientific mission of his previous life by Supersoul, Krishna within his heart, and will once again take up that same unfinished work from his previous life.

There are 3 components which work together to make us what we appear to be here in the material world. One is the material body made of earth, water and fire. That is as far as the scientist’s knowledge goes. They try and explain everything in terms of chemical reactions which are simply the interactions of earth, water and fire. They tell us there is nothing else. that is like a child telling us that the motor cars are moving all by themselves. The child has no idea of the engine within the car which is powering it, nor does he know that there is a person, a driver, controlling and directing the car from within.

So the first of the three components is called the “material body.”

So the purpose of all this description of the three different components of the “people” we see before us and of ourselves and its connection to reincarnation will become clear below.

When we “die” what happens is that simply the gross body, made of earth, water and fire, is no longer a suitable place for the soul to live, so the soul and the subtle body leave the gross body. As soon as the soul leaves the gross body appears to be “dead.” Of course it was dead all along. It only appeared “alive” because the soul was present within it.

But the important point you will note here is that not only the soul is changing from one body to another, but also the subtle body consisting of the material mind, the material intelligence, and the false ego. That is also going with us into the next body.

There is information given to us in the Srimad-Bhagavatam that a pious child within the womb can remember many of his previous births and in that position, which is not at all comfortable, he is praying to Krishna that this birth, “Please don’t let me forget You.” However the pain of birth is very traumatic and as a result of this trauma the child looses his memory and as soon as he takes birth the hellish conditions of the womb are replaced by the comparatively comfortable position of his mothers arms… And everyone is interested in him, all he has to do is cry and there will be so much attention… He has completely forgotten his past births…

However you can see from this that although we forget our past births at the time of this birth because we are carrying the mind, intelligence and ego with us from our previous birth the memories of our previous birth are with us, stored in our mind, so those memories from the past still effect us in this life and may appear in dreams. They are there in our sub conscious.

Some hypnotherapists have shown very credible evidence that they have been able to access this information from past lives by hypnotizing people and doing “past life regressions.” Of course there are so many cheaters also… However there is enough solid evidence to show that many, many people have been able to remember things from places and countries that they could not have known about unless they had been there in a previous life. This field has been studied quite extensively and there is a lot of literature out there about it. But reading it will not help you become Krishna conscious, it will not help your future.

So overall, yes, we have all had past lives, but knowing about them is not very important. And if still you are so anxious to know about it the only 2 methods I am aware of for finding something out is astrology and past life regression. But both fields are full of cheaters and con artists. Finding a proper qualified astrologer in the US is practically impossible. Here someone reads half a book about astrology and gets a computer program to print out astrological charts and then puts up a sign “Fred Smith–Vedic Astrologer.” But astrology is a great science and can not be learnt so easily.

Overall devotees are not concerned with these things. It is a waste of time, it doesn’t matter what you were in the past, you can not do anything about it anyhow, it matters what you will be in the future, and you have full control over that if you take advantage of Krishna consciousness.

PS: Thanks for the great questions.

31 Responses to Finding out About Our Past Lives?